The Continuing Mysteries of Hanging Rock 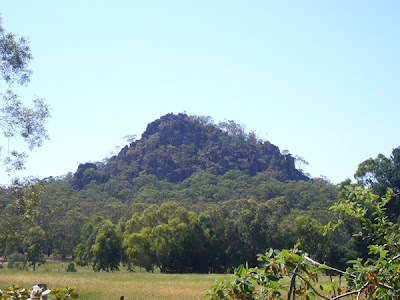 Hanging Rock, Woodend, Victoria, Australia. Nov.2008. Ajr
When you stand alone, among the whispering gum trees of Hanging Rock Reserve on a hot, still Victorian summer’s day, the lines between truth and fiction blur. Mysterious rock formations cast haunting shadows; insects buzz around your ears; and a lone kookaburra voice echoes through the stillness. With its dangerous escarpments and reputedly bottomless holes, Hanging Rock was the perfect backdrop for Joan Lindsay’s bestselling novel – entirely fictional I might add - "Picnic at Hanging Rock,” first published in 1967 and released as a film in 1975. The book tells the story of a party of schoolgirls who travel to Hanging Rock in Victoria’s Mount Macedon area, just a few kilometres from Woodend, where I’m staying, for a Valentine’s Day picnic on February 14,1900. The outing ends in tragedy when three girls and a teacher mysteriously vanish after climbing the rock. Only one is ever seen again; no reason for the disappearance is ever given. While Lindsay’s story is entirely fictional, Hanging Rock itself is a real and mysterious geological feature – a small, steep-sided volcano known as a mamelon, which was formed six million years ago over a vent in the earth. It now rises 105 metres from the surrounding plains and it is recognised as one of the best examples of mamelon in the world – similar formations of this type of rock are only found elsewhere in Norway and Sweden. And yes, people still come in droves for picnics. Lindsay’s book has cemented Hanging Rock in Australian history forever it seems.
Posted by Adrienne Rewi at 7:01 AM