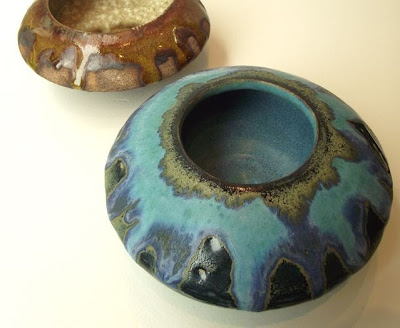 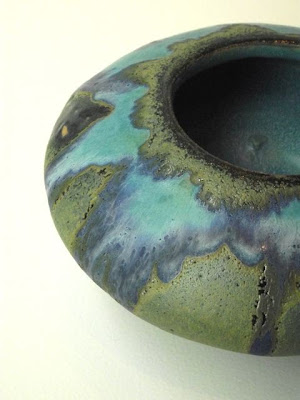 endangered
is a fitting title for this voluptuous collection of bottles and vases by Dunedin ceramic artist, Liz Fea, now on show at Dunedin's Quadrant Gallery. For Fea, endangered refers to the very essence of ceramic making, to its treachery throughout the production process. Submitting handmade works to the heat of the kiln is unpredictable; the pot is endangered at all stages and until it is safely fired, we cannot know how it will turn out. Equally, it may refer to the art itself - at least in modern western society, where the 'bigger' more glamorous arts of painting and sculpture get all the glory. 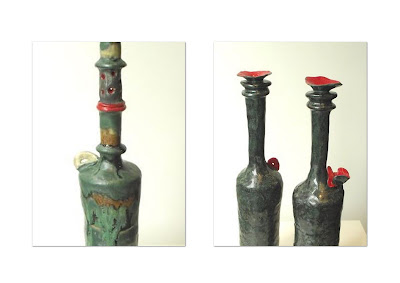 For endangered, Fea continues on from a major body of work she completed in 2009 - work that referred to the fragile nature of much of the New Zealand landscape. Now her vessels also allude to the endangered flora and fauna that inhabits that fragile and threatened landscape.
The bottle form is an ancient one developed over many millennia and Fea's "slightly over-the-top" contemporary vessels have captured something of that history. They have the look of an archaeological find, bottles produced for ceremony in some indulgent, ancient civilisation - each one a 'jewelled landscape' dripping the colours of the natural world. Fea gives free expression to colour and texture, light and shade in works that are influenced not only by the paintings of Colin McCahon (and his similar use of dense greens), but also to the rich, textural, early bamboo prints of Stanley Palmer. 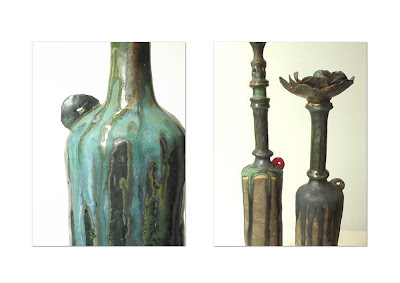 Liz Fea is relatively new to the ancient joys and caprices of ceramics. She graduated from the Otago Polytechnic School of Art just last year with a Bachelor of Visual Arts and a Diploma in Ceramic Art and says the works in this exhibition are "highly experimental" and made to convey a sense of fun, at the same time drawing attention to the fragility of our land. The show continues at Quadrant gallery in Dunedin until october 30, 2010. All images supplied.
www.quadrantgallery.co.nz
Posted by Adrienne Rewi at 7:26 AM

It's a pleasure - beautiful work! - Adrienne