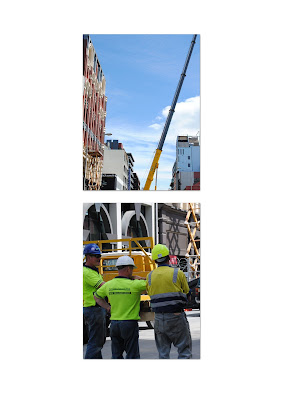 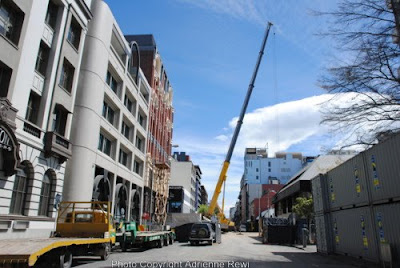 Tuesday, October 19th was the official beginning of the demolition of Manchester Courts in Christchurch. The sun shone, the skies were blue and city nerves were on edge, just hours after another after-shock measuring 5 on the Richter scale - shallow and close to the city, which made it seem all the stronger. But that didn't stop people gathering to watch the first stages of this unique heritage building's demolition. Some had even set up their folding deck chairs on Manchester Street - a little early as far as I could see because there wasn't a lot happening. 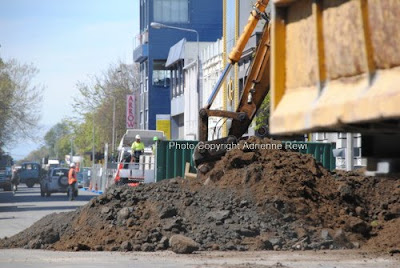 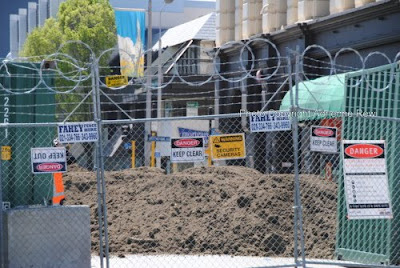 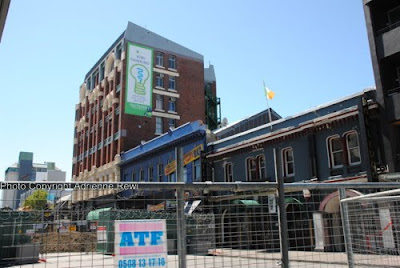 For the better part of the last week, a continuous stream of lorries has been dumping dirt on the road to create the 8-metre high bund necessary to give the cranes the height they'll need to access the top levels of the building. Streets are fenced off for at least a block , complete with barbed wire to keep sticky-beaks, protesters and other sundry opportunists out; and police are making regular on-foot patrols. Shipping containers have been stacked three and four high along a part of Hereford Street to protect other buildings and pedestrians from any falling debris and even yesterday, the truck loads of dirt continue to pile in. 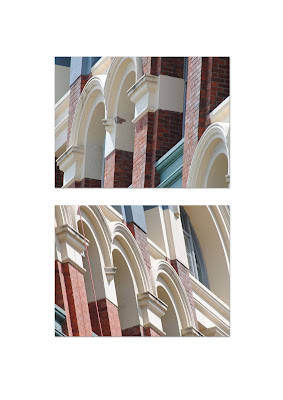 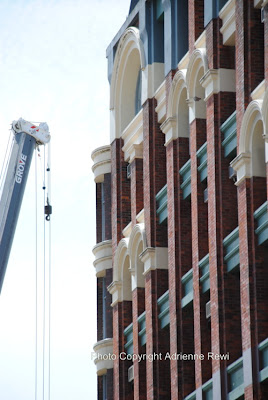 The demolition is expected to take around six weeks, although once started, I suspect things will move quickly - not that you'd guess that from the relaxed approach being taken by demolition workers yesterday afternoon (see below). 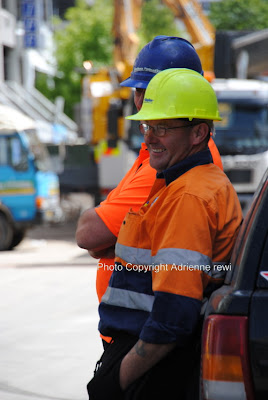 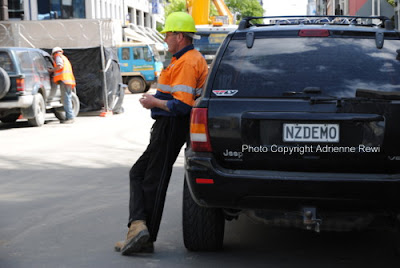 I spoke with a young German tourist who was also watching proceedings. She hadn't been thrilled by the big after-shock earlier but she did think Manchester Courts had "architectural merit." "But if they are demolishing it, why not a bomb?" she asked - with a perfectly straight face. "It would be quicker and maybe not so many people would hang around."
Such a practical people the Germans, I find.
Another older woman joined us. She stood a minute looking completely bemused and then asked what everyone was looking at. That too, seemed a perfectly logical question. When I told her the workers were beginning the demolition of the big brick building on the corner, she looked at me as if I was joking. "It looks perfectly fine to me," she stated, pushing her glasses up her nose and stalking off.
Needless to say her sentiments will echo loudly in many quarters of the city and beyond for the demoliton is not without controversy. All ten engineers who have inspected the building say it cannot be saved and at the end of the day, I'm prepared to believe them. That a local council (none of them engineers I would guess) has the power to decide the fate of a heritage building of national significance is another matter entirely. Obviously, given that Christchurch continues to be pounded with after-shocks six and a half weeks after the big one - we've now had in excess of 1,900 of them - a speedy decision was imported but I do wonder if much of that haste has not come about because of pressure from surrounding business owners, who cannot operate for as long as Manchester Courts stands in its current perilous state.
Posted by Adrienne Rewi at 3:00 AM