The Business of Bracing 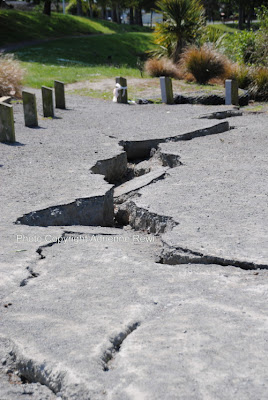 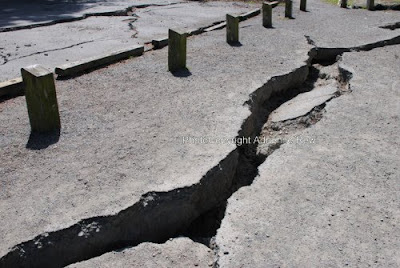 I went biking in Horseshoe Lake Reserve last weekend, in the northeastern suburbs of Christchurch. With no particular destination in mind, I found myself on a bush track running along one side of the lake and I was amazed at the amount of damage wrought by the September 4th earthquake. Boardwalks had come away from their bearings and the track was pitted, cracked and flooded in a number of places. I met a man along the way, tidying up fallen branches. He told me he was an 'unofficial caretaker' in the reserve and that on the morning of the earthquake, he had found fish washed up on the bush track, several feet away from the lake. Certainly, when you see the huge cracks in the reserve car park (above), it's not hard to imagine how the lake must have sent a huge wave of water into the surrounding landscape. 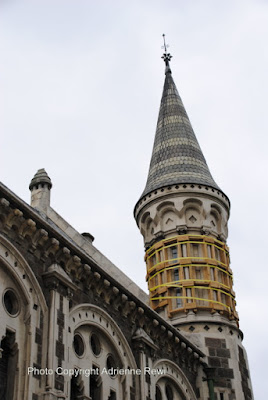 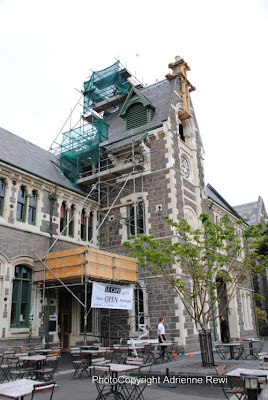 I've spent a lot of time walking around the city in recent days and even subtracting the massive amount of construction work taking place for the installation of the city's extended tram tracks, the whole place is like a construction site - or should that be a demolition site? It's both actually and bracing is definitely big business. From The Arts Centre (above) to Otautahi (below) and to dozens of suburban shops around the city (bottom), buildings have taken 'a new architecture' as teams of builders race to make everything secure. 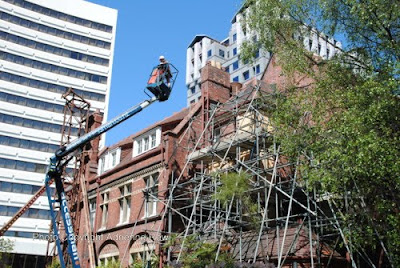 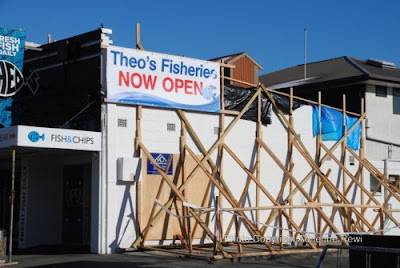 I'm fascinated by the whole business - the cranes (of course), the scaffolding, the neat 'packaging' and 'bandaging' of buildings against further damage, the tidy little 'timber patches' holding historic stones in place. And all the while (in most cases), life goes on as normal below. There are the sad losses - Manchester Courts (now being demolished) and the possible demolition of St Elmos Court - but for the most part, the historic beauties of the city will be salavagable. Some judicious bracing here, some clever patch work there and the city will be stitched together again. It's been a fraught, wobbly two months since September 4th and with more than 2,400 after-shocks to keep us on our toes, there are plenty of people still reeling. But it's also an exciting time - a time filled with opportunity and promise as the damaged buildings are repaired and the irretrievable are taken down to make way for the new. It would be very easy to feel despondent about pending architectural argument and diabolical architectural outcomes but for now I'm hoping for the best.
Posted by Adrienne Rewi at 1:59 PM