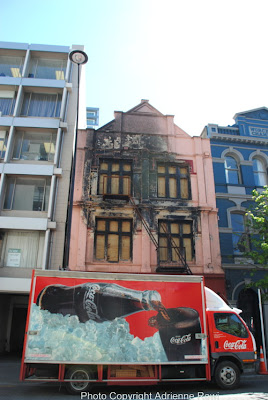 I'm one of those odd people who photographs the world in assorted series.
But every so often there are shots that I take 'in the moment' because something about the scene has caught my eye. It may a marriage of colours or forms, or an unlikely juxtaposition. Invariably, I end up with a whole heap of photographs that I quite like but have no real use for. So bingo, what do I do? I create another series of course - a series of mismatched moments; in this case a series of 'disjointed' City Scene(s). So here is the first. A bright COKE truck pulled up under the Worcester Boulevard building that caught fire just after the big 7.1 September 4th earthquake in Christchurch.
Posted by Adrienne Rewi at 2:38 AM