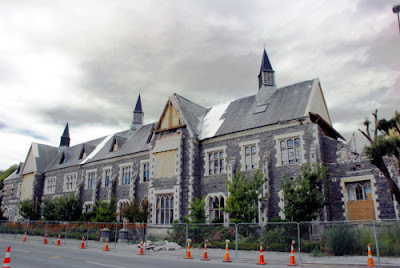 As long as I’ve been in Christchurch, the Cranmer Court Apartments have been one of my favourite city buildings, their revival Gothic architecture dominating the prominant corner of Cranmer Square, just a five minute walk from Cathedral Square. And yet, much to my dismay, I discover I never photographed them prior to the Christchurch earthquakes. This (above & below) is how they look today – a shadow of their former glory but as interesting to me now as they ever were for the way they – like so many Christchurch buildings – are morphing, almost on a weekly basis. 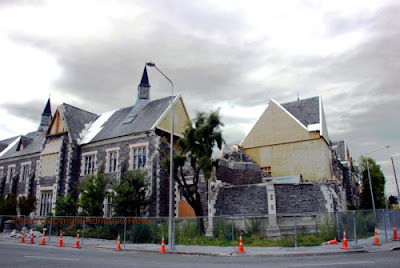 Built as the Christchurch Normal School and opened in April 1876, the building was designed by British-born architect, Samuel Farr (b .1827), who adopted a revival Gothic Style and embellished the original buildings with many spires and decorative details that were later removed. Christchurch Normal was the first model school in New Zealand. In 1954 the buildings became the training centre for the Post-Primary Depasrtment of the Christchurch Teachers’ College and was later vacated in 1970 when the college moved to Ilam. They lay vacant, the target of vandals for a decade before developers stepped in in the mid-80s and converted them to luxury apartments. 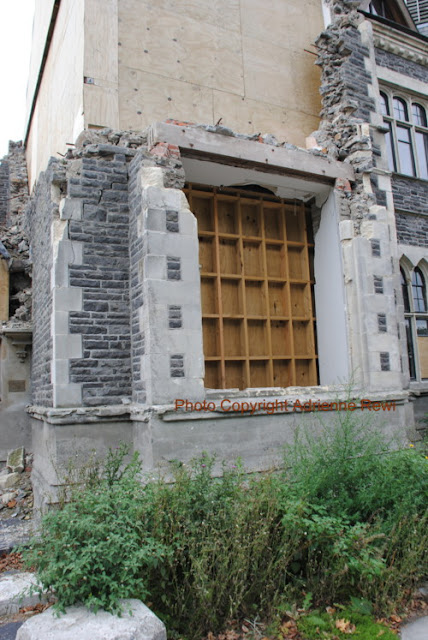 Now there is a new history unfolding. In the wake of the violence of 18 months of earthquakes, many of the complex’s highlights – the stunning corner Octagon for instance, with its intricate timber ceiling – have crumbled and builders have stepped in to make it safe. In the process of doing so, they have given the structure new life. Ever since the 7.1 quake in September 2010, I have been fascinated by newly-revealed walls of many city buildings. Long hidden from view, they have been exposed by the demise of neighbouring buildings. Old sealed doorways are revealed, weathered materials see daylight again and long-forgotten typography announcing ‘ghostly’ businesses of the past is once again writ large across a crumbling cityscape. 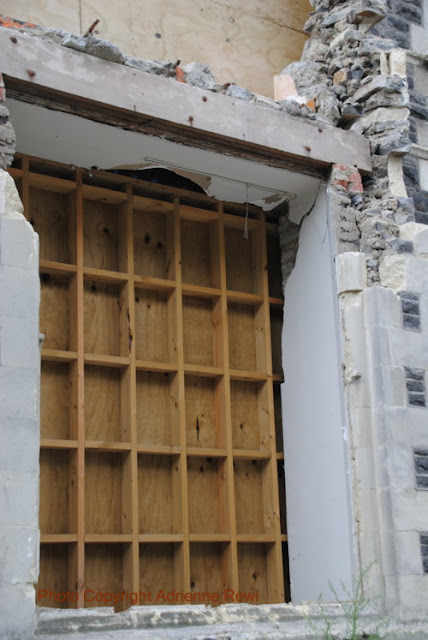 ﻿And then come the builders with their handy sheets of cheap, modern plywood, sealing the ‘eyes and ears’ of the old beauties to keep them safe from the rigours of weather, theives and vandals. It’s those flimsy, grainy, sheets, slotted carefully into the architectural bulk of Cranmer Courts that I now love. 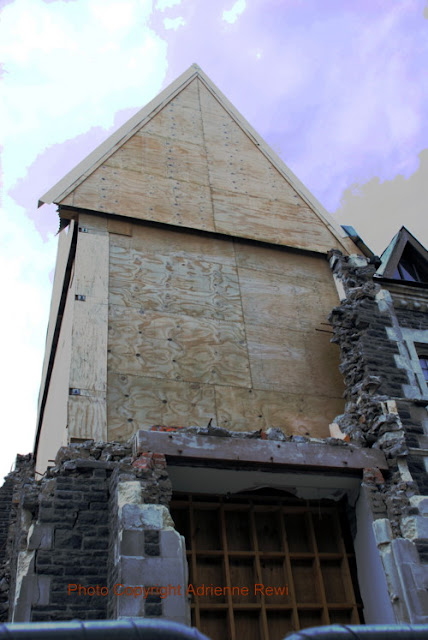 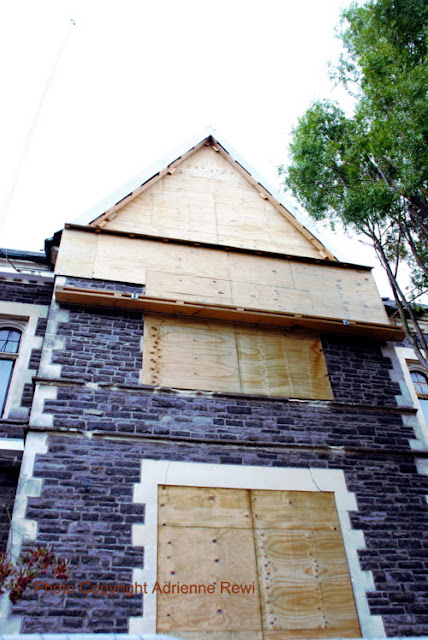 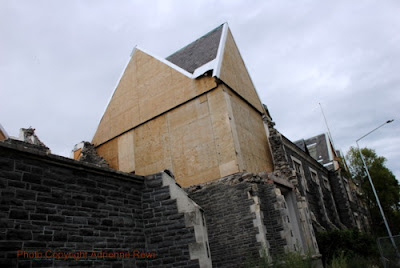 For me, there’s the hint of a Japanese aesthetic to it – a simplicity that alludes, quite unintentionally on the builders’ part I’m sure, to the Japanese aesthetic ideal of emptiness and impermanence, and the celebration of imperfection. 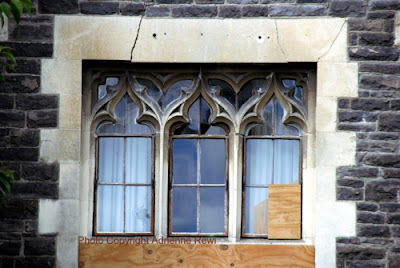 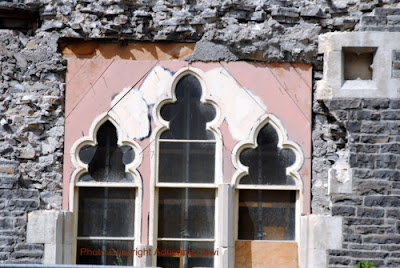 I like the golden glow of the timber grain against the hefty stone; the bland flatness against the curved arches and carved doorways; the lightness and impermanence of board against the weight and longevity of stone. 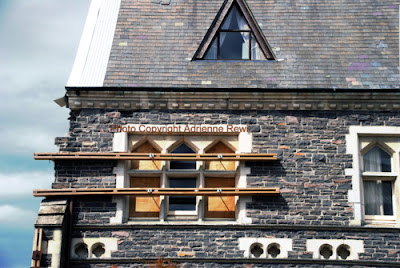 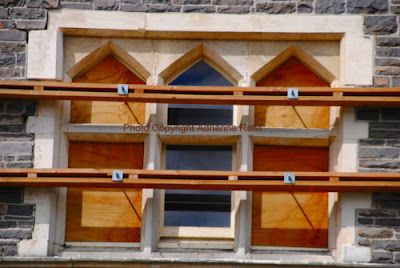 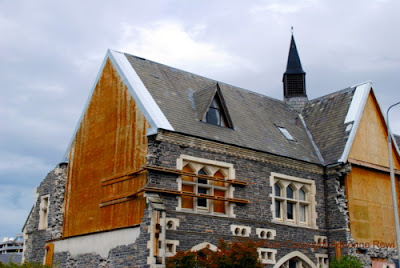 There’s (an imagined perhaps) gentleness to they way board has been cut-to-fit and made-to-measure. I like to imagine the builders did so with a sense of reverence for the craftsmanship of yesteryear, that they took their time to create temporary solutions befitting an architectural matron with a proud heritage. 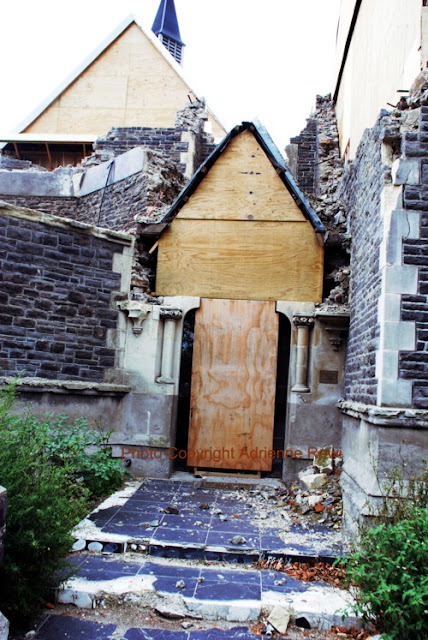 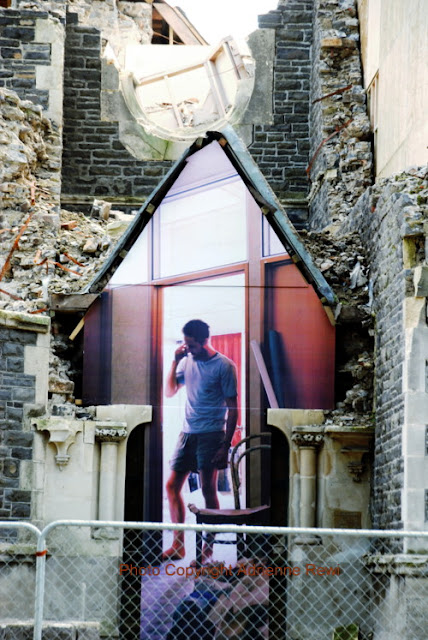 And in keeping with that Japanese concern with impermanence and versatility in architecture, along come contemporary artists – Tony de Latour if I’m not mistaken – to adapt the building further. A number of the Cranmer Court windows have been adorned with large images that trick the eye into believing that someone (and de Latour himself is featured), is once again living within these old walls. 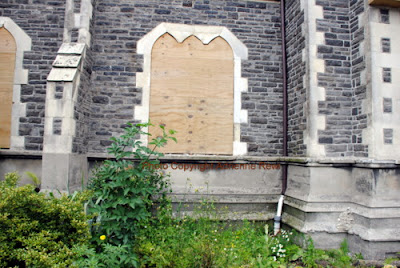 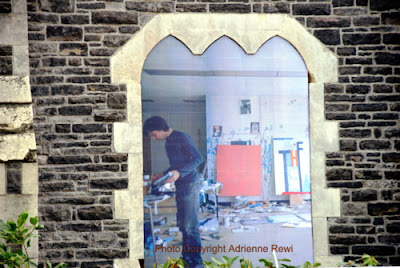 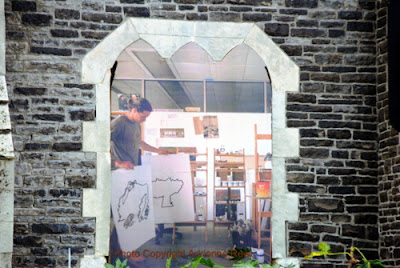 It’s a nice touch, a pleasing continuity that alludes to the fact that Christchurch is doing its best to get on with things; and being ‘normal’ in an old Normal School adds as pleasing sense of irony. 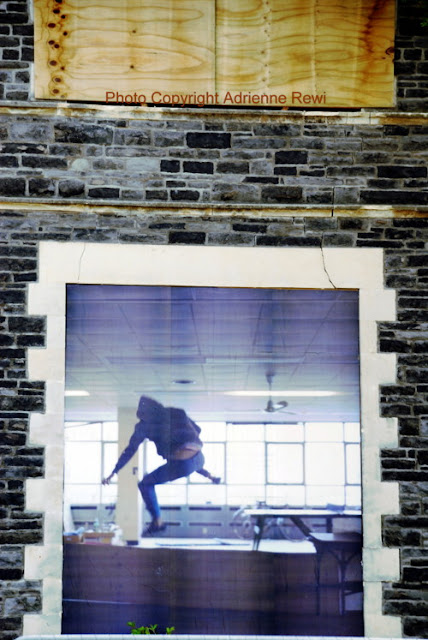 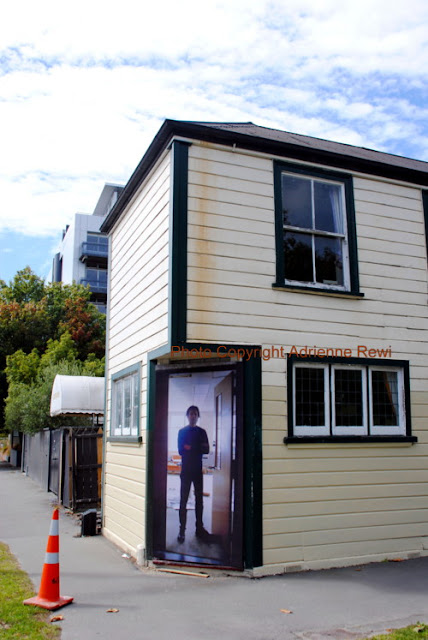 (And this old building across the road from Cranmer Courts) 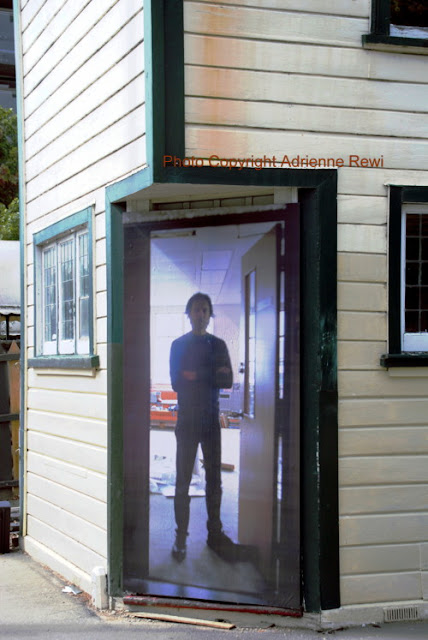 It’s these small things, these changing architectural faces that I delight in. It’s so easy to get bogged down in the negative, in the loss of heritage. There’s no denying the loss of much of Canterbury’s finest architecture but we should be looking ahead. There is no going back. We need to turn our attention to the future, to creating something new and memorable. Personally, I’d like to see that include some of the remnants of the old. You get a sense of how things could be when you look at Cranmer Courts now – with its quirky marriage of timber and stone, of old and new. It may not be perfect but then, life seldom is. The Japanese know and recognise that. Why can't we?
If you'd like to read the full history of Cranmer Courts, click on this excellent Christchurch City Libraries link.
http://christchurchcitylibraries.com/Heritage/Publications/ChristchurchCityCouncil/ArchitecturalHeritage/NormalSchool/NormalSchool.pdf
Posted by Adrienne Rewi at 9:22 AM