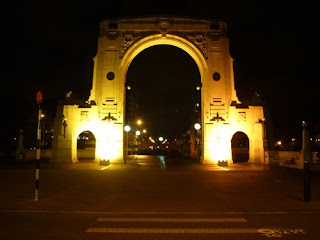 Bridge of Remembrance, Christchurch. June 2008. Ajr
This is our very own little Arc de Triomphe – and like the Parisian icon, ours is also a war memorial. I took this shot last night when I was wandering the disappointingly-empty Cashel Mall on my way to dinner. (It was only 7pm – where were the people?) This is The Bridge of Remembrance, designed by Wellington architects Prouse and Gummer, with sculptural elements by local sculptor Frederick Gurnsey and his assistant, Lawrence Berry. It was unveiled on Armistice Day, November 11, 1924 and dedicated to the memory of those who took part World War I. Further plaques were added to commemorate the soldiers of World War II.

Posted by Adrienne Rewi at 7:56 AM