Returning to Shaky Ground - Back Home in Christchurch 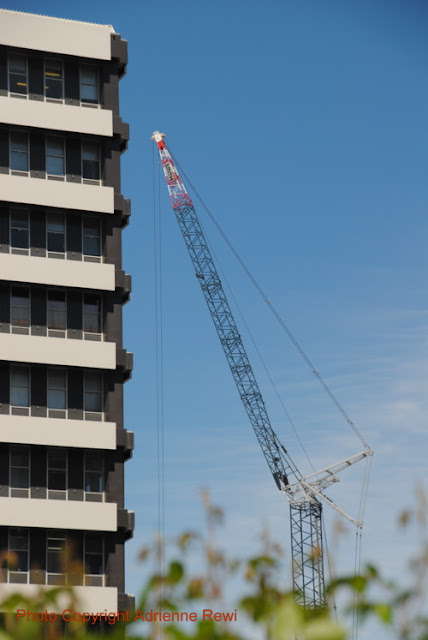 In August, I flew away to Australia for two months to escape Christchurch. After a year of endless earthquakes and after shocks, a year of filth, grime and uncertainty, I had finally had enough. While I was away, I quickly adapted to steady, unshaking ground and I quickly forgot about locating my torch and my car keys in a sensible place, ready for a fast escape. I quickly outgrew the automatic urge to check doorways and nearby highrise﻿ so that I might make a clear run for safety. 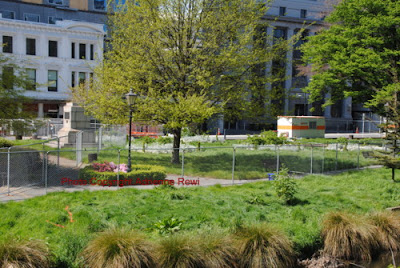 So immune have I become to earthquakes, that when the largest earthquake since June occurred - the 5.5 last Sunday - less than 24 hours after my arrival back in Christchurch, I hardly blinked an eye. I just sat on my sofa and thought, 'oh, it's an earthquake.' I wouldn't have thought about them again either, except everyone keeps asking me, 'What's it like to be back in Christchurch again?'
I decided to find out yesterday.It was a brilliant sunny day so I took my camera and wandered around the perimeter of the inner city cordon. These are some of the things that struck me.
As soon as I got out of my car on Cambridge Terraces I noticed how dishevelled and overgrown parts of our 'Garden City' have become (see above). Forget pristine borders and perfectly manicured lawns - the grassy banks of the Avon have been reclaimed by the ducks. 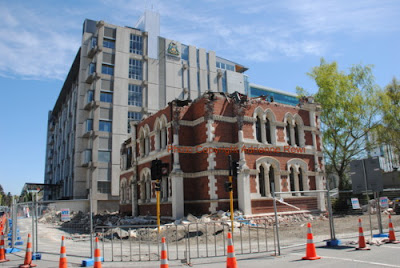 I was struck by the pace of demolition and by the number of gaping wounds in the cityscape. In just 8 weeks away, so many more buildings have been razed to the ground - and in the case of the elegant, old Christchurch Library Building across the road from the Police Station, history is being nibbled away by the slow but steady chomping of diggers and cranes. 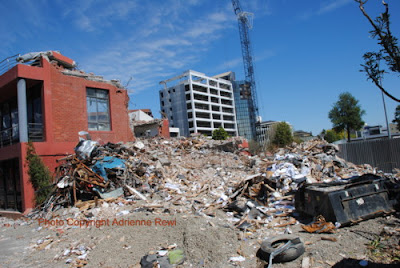 I noted with particular sadness, the demise of the Cashel Street apartment block (rear building in above photo), designed by Christchurch architect Thom Craig. Its penthouse has been lopped off the top and the rest of the building is on the way down too. I used to fantasise about living in that penthouse. It seem so perfectly placed, close to the heart of the city and high enough to be quiet and 'removed' from the social bedlam of weekends. 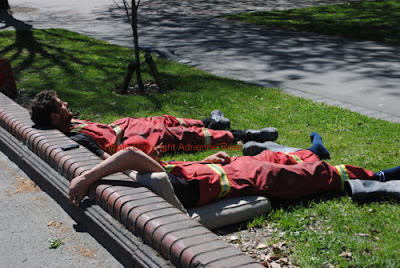 I noted again, that despite the disastrous mangling of our city over the course of a year, there have been so many high points and moments of (sometimes black) humour that it's hard to be disheartened for long. I have found so many light-hearted, inspiring and funny scenes, signs and occurances that I refuse to believe the people of Christchurch aren't damn good sorts ready to laugh in the face of adversity. That's not to belittle, or make light of those who have suffered - and continue to suffer - severely of course. I am however, completely over this 'Kia Kaha Christchurch' business and I don't think Cantabrians are any more steadfast and resilient than anyone else facing disaster anywhere in the world - it's human instinct to rise up in adversity. But when I see and hear jokes playing out in real life - like the two guys taking a break from their demolition site to rest in the sun on the edge of the Red Zone yesterday, good-naturedly bantering with passersby about it being 'a hard day' - I am glad I returned. 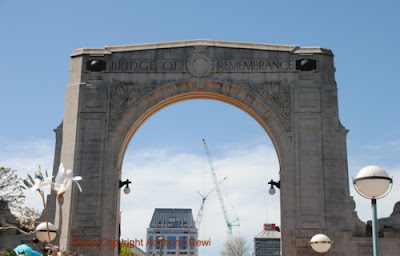 When I saw the teetering form of the Grand Chancellor Hotel glimpsed through The Bridge of Remembrance, I was overwhelmed by the irony of the situation. Almost the entire lower section of Cashel Mall just beyond the bridge, has been demolished. It's all gone and as I stood there, I *couldn't* remember what had even been there eight weeks earlier. And soon - well, in a few months' time - the Grand Chancellor will also be gone. It's that relentless erasing of my memories that strikes me the most about Christchurch in the aftermath of the September 2010 7.1 earthquake. Ever since then, whole parts of my own (20-year) memory of Christchurch have slipped away. We get on with our daily business here because we have to and it's easy to lose touch with 'that other reality.' It's not until you wander around the inner city cordons, or drive through the worst-hit suburbs, that you realise it's not just a city being demolished, its the fabric of your own history. 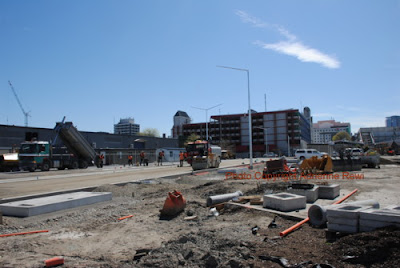 And now the rebuild has begun. Well.....the new temporary Bus Exchange in Tuam Street is underway at least. It was a hive of activity yesterday as orange-jacketed workers sealed new stretches of a wide, barren expanse. As for other obvious steps towards the much-touted City Rebuild Plan, it's hard to see any evidence of action, which is understandable I guess, when you consider the number of inner city buildings - whole stretches of them - that still await demolition. I know these things take time, but coming home after eight weeks away, it seems to me that politics, bureaucracy and nit-picking among the powers-that-be have swamped the good intentions of the Plan. I hope someone is going to prove me wrong. 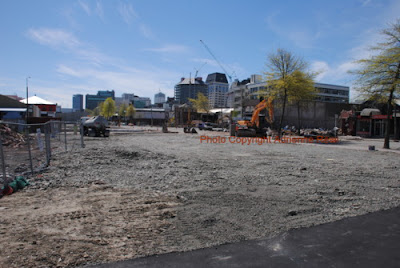 I did feel less-than-positive yesterday though, when I took in this vast 'scrubbed-clean' section of Colombo Street. It's now hard to believe that this was once the busy 'main street' of Christchurch central, filled with shops and restaurants. And as I stood there, peering through a high fence, I wondered how long it would be before we could say that about Colombo Street again. 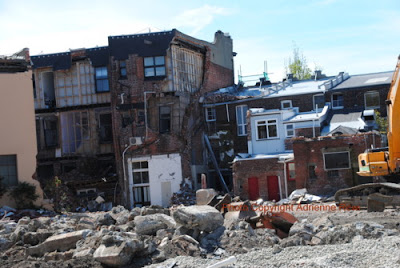 And how long it would be before we could call this slum-like area of High Street, trendy and boutique again. 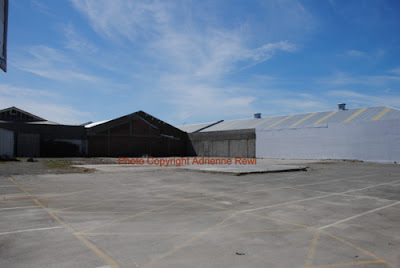 I wondered what it will take to bring 'life and excitement' back to these now-barren and all-too-plentiful empty lots scattered throughout the inner city - and how long will we have to wait? And how many people will leave the city for good before any of this ever gets off the ground? 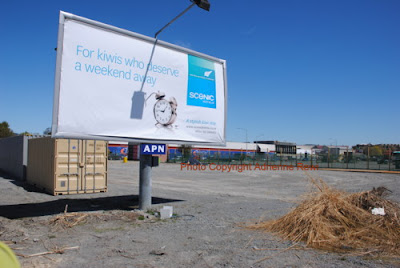 By the time I got this far around my city wander, my enthusiasm and generally positive attitude had taken a bit of a beating and the cynic in me took a pernicious delight in the irony of this tourism billboard. The board in itself (promoting the very successful Scenic Hotel chain) is perfectly fine but juxtaposed as it is, against a huge, blank, windswept stretch of city land, advertising 'For Kiwis who deserve a weekend away,' it takes on a whole other meaning. I doubt there are many Kiwis at all, who, if they are honest, really want to come and spend a leisurely weekend in Christchurch as it currently stands. That they are often misinformed and that there plenty of tourism beds and things to do in and around the city, doesn't seem to carry as much weight as it should. 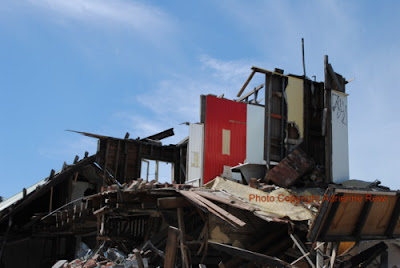 Personally, I think one of the most under-rated tourism activities in Christchurch at the moment is Earthquake Tourism. Rather than trying to pretend the earthquakes haven't happened, that they haven't impacted severely on tourism activities within the city, we should be embracing the ruins and encouraging people to wander the streets with their cameras. There are astonishing photographs everywhere; there are humbling and moving sights everywhere; and there's a weird fascination in watching demolitions taking place. You only need to wander around the cordon perimeters to encounter hundreds of others doing exactly the same thing. I've chatted with people from all over the world on what I now fondly call 'my earthquake rounds' and they all want to know more. 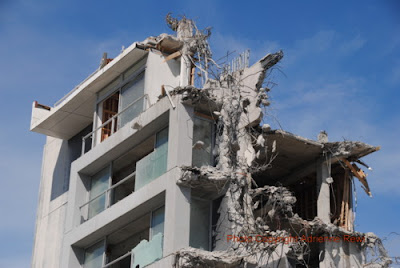 There is sadness associated with the demolition - that whole memory thing I mentioned earlier, not to mention the keen loss felt by owners and tenants of buildings. As I stood with many others yesterday, watching and photographing the demolition of the 'virtually new,' upmarket apartment block, The Establishment on Victoria Street, I couldn't help wondering about the people who had invested in apartments there and what they might be doing now. At the same time though, I marvelled at the images unfolding before me and as the giant snapping jaws of the demolition machines (below) tore at the fabric of this recently-stylish building, I couldn't help a small tide of excitement rising as I imagined what might occupy this valuable patch of land in the coming years. 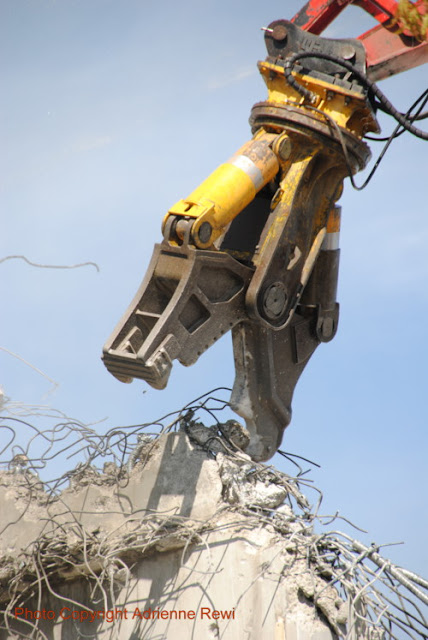 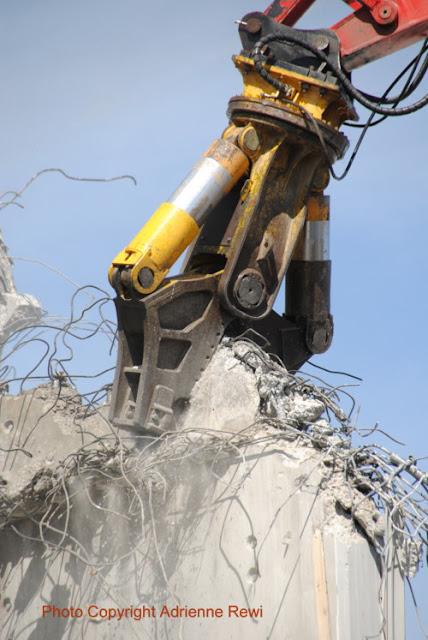 I used to fantasise about living in that penthouse too! I live just down the road a bit from it and used to look at it every day. I will miss the Harvey Cameron building too.

It's that relentless erasing of my memories that strikes me the most about Christchurch in the aftermath of the September 2010 7.1 earthquake. Ever since then, whole parts of my own (20-year) memory of Christchurch have slipped away.

This is what scares me most, in some ways. I left Christchurch to move overseas two weeks before the September 2010 quake, after living there for six years, and at the very earliest I won't be able to visit until next July. Most of the demolition will have been completed by then. I feel like my memories are being swept up behind me, and by the time I'm able to return, they won't be there any more.

Every time I look at photos of the ongoing demolition I switch to Google Earth and back, trying to remember what was there, trying to visualise what's gone. It makes life seem so fragile.

The strangest thing of all is, you can drive for miles in residential Christchurch and hardly see a sign that the city has been battered by over 8,000 earthquakes & aftershocks over the last 13 months; then you turn a corner and whole stretches of shops have been erased. It's disconcerting for those of us who live here, so for you, coming back after a long time away, I imagine it will be a very emotional business.