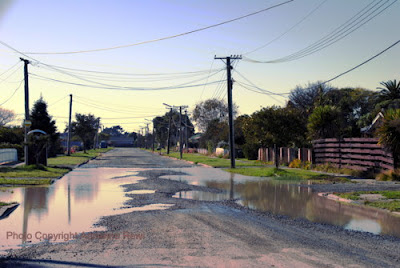 When I drove over to Bexley early on Saturday morning to check out the state of this suburban Red Zone area, I couldn't help thinking of the irony of the situation. When I'm checking out houses and gardens usually, I'm picking my way around some refined architectural interior and wandering  meticulously manicured gardens - all the better to photograph for magazines etc.
You don't find much of that sort of thing on the east side of Christchurch.
Certainly not in Bexley - and definitely not since the earthquakes. 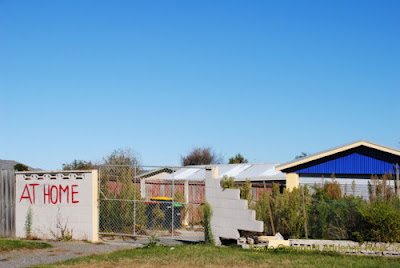 What you get here, in the aftermath of bureaucratic decision-making, is a deserted, forlorn suburb with the guts kicked out of it. Broken roads, houses askew, water from leaking and broken pipes boarded-up windows - or windows wrenched off their hinges and curtains billowing out inton the elements.
There are a few plaintive signs - We Are Home, At Home, Still Living Here, Yes, We Are Here - but you go a long way before you actually *see* any residents. 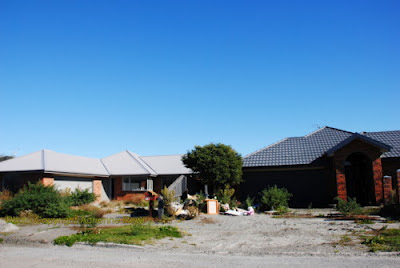 Amost-new homes sit buried to their kneecaps in now-solid liquefaction, awaiting the demolition machinery that will wipe much of this suburb off the face of the earth.
There are grubby piles of rubbish piled outside doorways and gateways.
A rotting sofa that no one wanted, now overgrown with long grass. 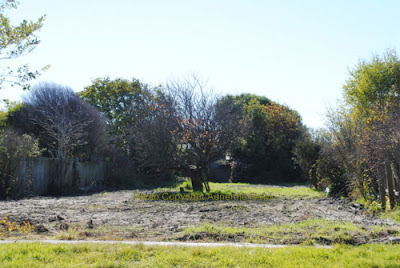 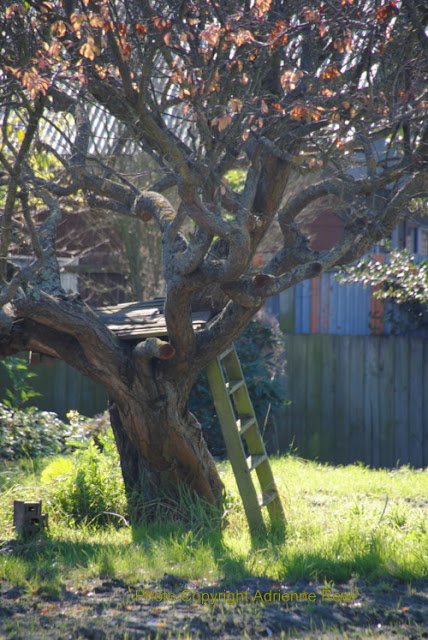 And mucky, blank sections now dot the suburb where the demolition has already occurred.
Most have been reduced to dug-over turf but some, like the one above, still retain some lingering evidence of human occupation. It's as if the guy in charge of the demolition couldn't bring himself to touch this old fruit tree in the middle of the section, with its ladder and remains of a treehouse.
I hope it stays - just as it is.
A poignant reminder. 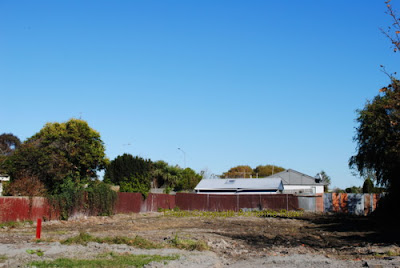 I find it hard to stand in front of these 'blank canvases' and not think of the family histories that have played out on these now-barren scraps of land.
Who lived there?
Who grew up in the garden?
How did they mark their favourite garden places?
What secrets and dreams unfolded here? 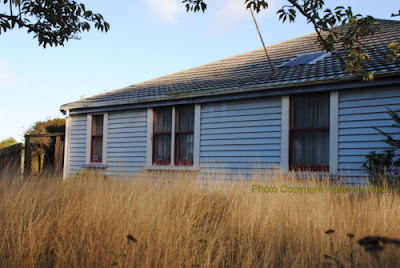 On Sunday morning - just as early - I drove a few blocks away to Locksley Avenue.
I've featured the Locksley Ave houses here before but I like to retrace my steps, to record the continuing disintegration, the demoltion and the general dishevelment of these once bustling domestic environments. 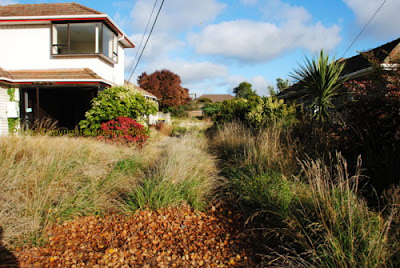 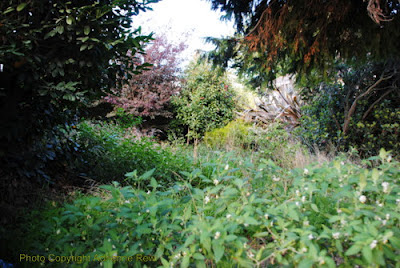 It's odd to come back.
The plants have grown significantly.
Some gardens are barely recogniseable as such, as unchecked vines and unpruned roses stride across the lawns, over trees and fences, twining themselves through piles of broken architecture.
In some cases front lawns have vanished under escaping garden foliage. 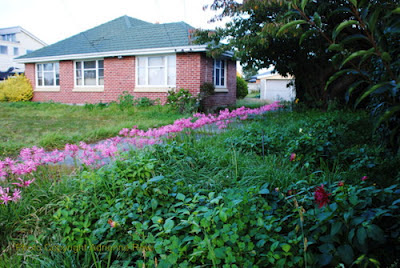 But the hardy endure - the pink naked ladies, the dahlias, the marigiolds, the pansies - they're all still pushing themselves forward, up through the forest of greenery, trying to stake their claim to the land.
The hydrangeas elbow their way across doorways and jasmine and honeysuckle have grown rampant. 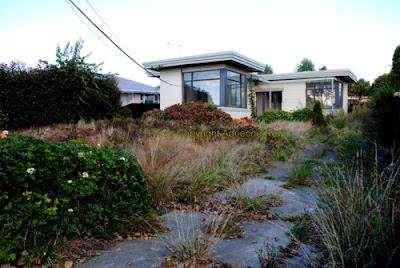 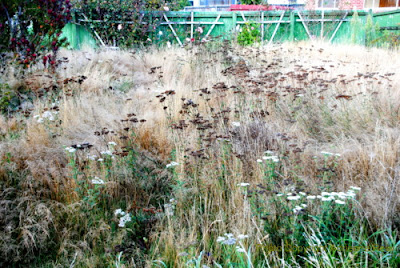 Many lawns have reverted to 'pasture,' with tall seedheads tickling at windowsills 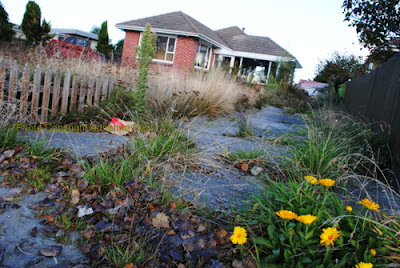 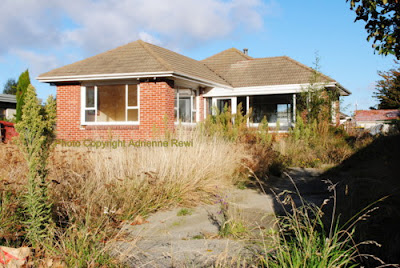 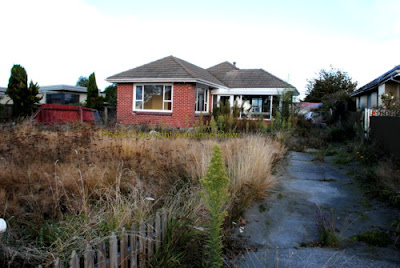 Driveways and pathways are humped and hollowed.
Weeds have greedily consumed cracks. 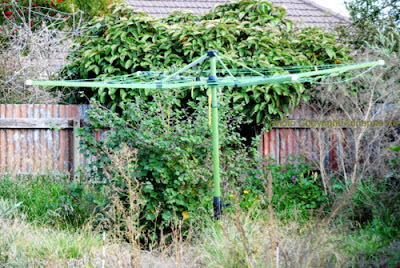 Empty clothes lines creak in the breeze.
Nothing says 'home' quite like the clothes line.
It's disconcerting to see once-busy backyards empty of life, of activity, of laughter, of games, of family madness and mayhem. 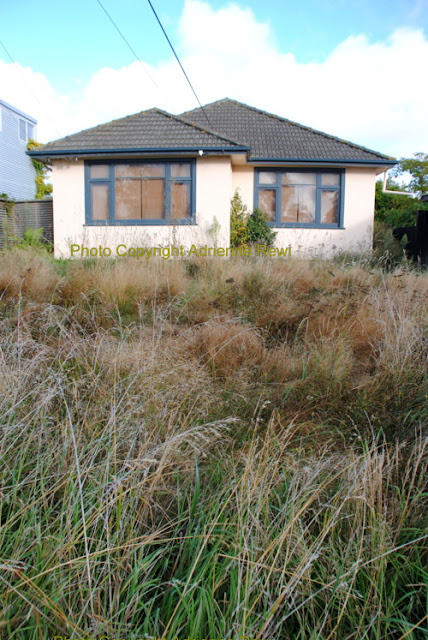 Walking abandoned Red Zone streets like these is an eye-opener.
For me they are the grass-roots﻿ evidence of the earthquakes - the places that bring home the true cost to the people of Christchurch. It's easy to feel sad about the inner city destruction and the demolition of heritage - it's all on such a grand, unmissable scale, it's where the media cameras focus.
But walking through the broken eastern suburbs, you see the real cost at a domestic level.
You can read the stories in the media but it's not until you set out on foot and see these sad, abandoned homes that you truly appreciate why so many Cantabrians feel so disenfranchised.
What saddens me most, is that so few people - even in Christchurch itself - actually make the effort to do it.
Posted by Adrienne Rewi at 2:42 PM

I really want to, but I feel such a rubber necker....
although on reflection, as they become more abandoned, it feels less intrusive and more respectful to pay tribute to them.

There's no need to feel a rubber-necker as 90% of the houses in some areas are abandoned and I think everyone in Christchurch unaffected to this degree *should* go and get a first-hand look at the extent of damage and ruin. And where there are people, most I've spoken to are only too pleased to share their plight.

These images of overgrownness made me feel sad too! We're a bit far away to walk the streets so thanks for doing it for us.