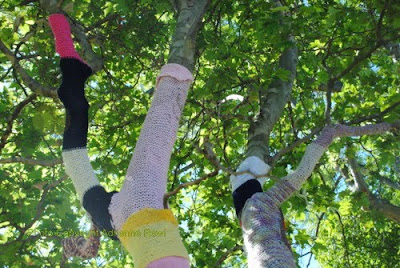 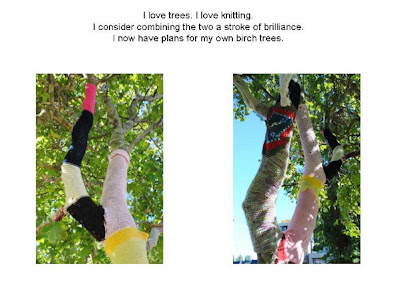 When a group of artists called Knitta kicked off a burst of 'knitted graffiti' in Houston, Texas in 2005, they probably had no idea that they were spawning a new international movement. Put 'knitted graffiti' or 'yarn-bombing' into Google these days and you'll be treated to a colourful worldwide phenomenon designed to "make street art a little more warm and fuzzy." 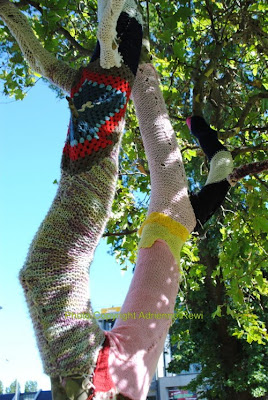 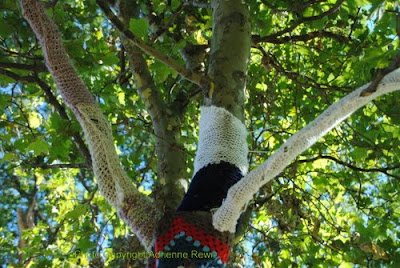 In the wake of the September 4, 2010 (7.1) earthquake in Christchurch, yarn bombers have been hitting the city's demolition sites and wire barricades. On the weekend, I photographed this colourful tree in Latimer Square and the below Nativity scene, which was part of a Christmas display on the wire barricades cordoning off the severely damaged Oxford Terrace Baptist Church. I have no idea who is responsible for the work but I love it. 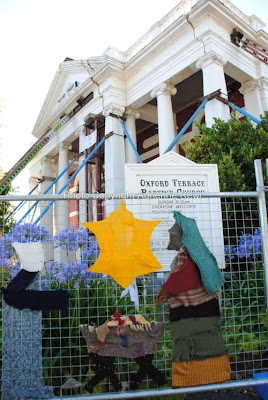 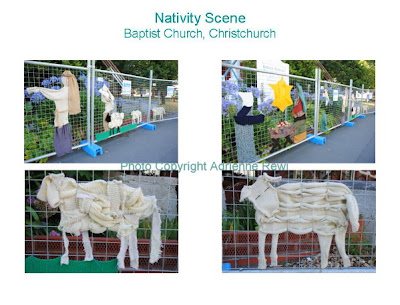 When I mentioned these knitted treats on Twitter recently, someone asked me 'what was the point' and 'wouldn't knitters be serving a better purpose by knitting hats for the needy?' Quite possibly, but my answer to that was simple - if you'd been sitting through the 4,500+ after-shocks that Cantabrians have had to endure these past four months, you too, might be happy to see something as simple, as pleasing and as whimsical as a flock of knitted sheep or a tree 'dressed for winter.'
That sort comment - that knitted graffiti is "aimless, a waste of time, worthless, a joke, nonsense" - is not uncommon. Similar remarks have been recorded worldwide. I see urban knitting differently. I think it's brilliant and what can possibly be wrong with beautifying public spaces in such a harmless way. I like good street art of the painted variety, but if you want "aimless, a waste of time, a joke" you only have to look at the hideous, pointless tagging that beautifies nothing. And sadly, as Christchurch's heart is punctuated with tatty patches of earthquake ruin, that pointless (painted) tagging seems to be on the increase.
So usher in the knitters I say!
Usher in the 'world's most inoffensive graffiti.' 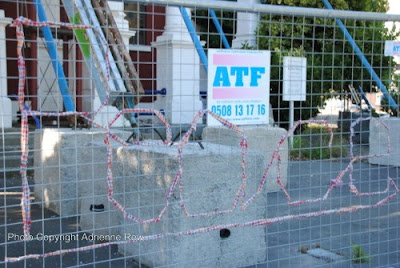 The other great quality of yarn-bombing is that brings people together - young and old - and makes them smile. We need smiles - everywhere - but especially in Christchurch right now. To illustrate that very point, when I was photographing the tree in Latimer Square, I was approached by a French tourist. He was bewitched by the tree and spent as much time as me photographing it. It led to some great conversation about the earthquake, about Christchurch and travelling. An unkempt, possibly hung-over person joined us - initially to ask for money but he too, seemed taken with the tree. I took his comment: "Rad man!" to be something of a compliment. A family also came by - "Look Mummy, the tree is wearing a cardy," said one of their young daughters. The yarn-bombers have been busy. Park benches and city statues have also been embellished. Sadly, the powers-that-be have seen fit to remove the hats and satorial decorations from the city's public sculptures (more's the pity in some cases), but the 'knitted' trees and the earthquake barricades remain. I find something very touching in that. Knitting is one of those old crafts that reeks of 'home,' of comfort, of warmth, of security - all the things that have been torn assunder for many Cantabrians; and for me, the yarn bombing - quite apart from the humour and the brightness of it - has done much to 'humanise' the earthquake ruins.
Posted by Adrienne Rewi at 3:00 AM

Wonderful post on yarn bombing and how it can bring joy and meaning to others. Thanks for sharing this story - I really enjoyed reading it and seeing the nativity scene.

I am always amused by other people who decide what is a waste of my time, and I am absolutely SURE they have NO clue what the homeless really need.

Lovely post, and I agree with Leanne about how it brings joy and meaning to others, that is never a waste.

I'm with you 100% - keep up the yarn-bombing I say. I'll be doing two of my own birch trees outside my office window this winter. I may be a little crazy but I'm sure the birches would find it too hot in summer :-) ) Happy knitting and thanks for your comment - Adrienne