Filling in the Gaps 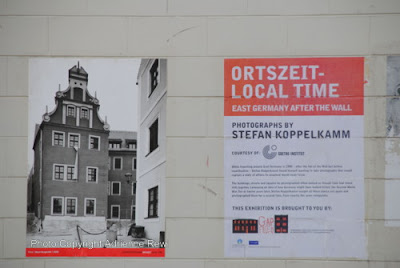 I came upon this outdoor exhibition of photographs a few days ago, when I was out biking in Christchurch inner city - or at least in the parts that are currently accessible in the wake of February's 6.3 earthquake. It's another of the terrific undertakings by Gap Filler.
Established after the 2010 September 4 earthquake, Gap Filler has been going about the city bringing 'an alternative use' to the empty lots once occupied by recently demolished shops and offices. 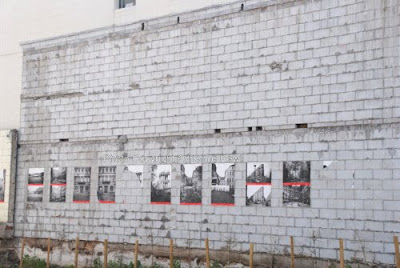 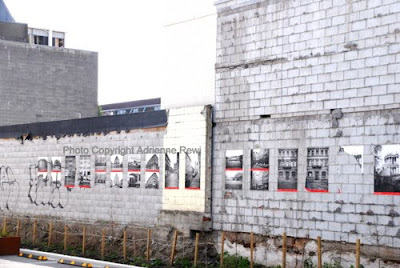 These photographs were taken by Stefan Koppelkamm - some while he was travelling in East Germany in 1990, "after the fall of the Berlin Wall but before reunification" and others (the same buildings and same perspectives), when he returned to the city 10-12 years later. The exhibition is located at 63 Worcester Boulevard in the emply lot beside Christchurch Art Gallery. I suspect it was installed prior to the February 22 earthquake (judging by photographs on Gap Fillers website). Since then, some have been torn down, others 'grafitti-ed' over - all part of inner city evolution of course. I didn't linger here too long. The carpark has been cordoned off and I felt a little too nervous in the presence of towering high rise and old brick walls to want to stay and inspect every image. It did however set me to thinking how Christchurch might look 10-12 years from now. It's a very timely and poignant exhibition in that sense.
Gap Filler meanwhile, are going about their business as usual.
Their next planned 'happening' is the Gap Filler Fun Fair.
To be held at St Mary's Church Square in Addington from 11am to 4pm on Saturday, April 9th. All funds raised from their projects goes to the Christchurch Earthquake Appeal and back to Gap Filler, to help them fund further projects.
www.gapfiller.org.nz
Posted by Adrienne Rewi at 2:00 AM

Very cool! Thanks for letting us all know.

I was sad to read on Gap Filler's site that they've given up on the central city, and will be doing things in the suburbs from now on. They only managed two events in the six months since the first quake, but they're much more needed now (and there are way more vacant lots too!)

That's true Mike, but I guess, with their ability to get INTO the central city so compromised now, it's easier for them to focus on the suburbs. And maybe they'll have more visibility in the suburbs post-February 22 too, given that many people either can't, or are reluctant to venture into the central city.
Either way, it's an excellent project that deserves a higher profile - and more funding. Unfortunately, so many worthy enterprises deserve funding in these uncertain times. Thanks for your comments. Adrienne

Hi
I read your blog and found it very informative and helpful to me .Thanks for such an effort

I spoke too soon: www.gapfiller.org.nz are advertising outdoor movies in Beckenham this weekend. Good on them.