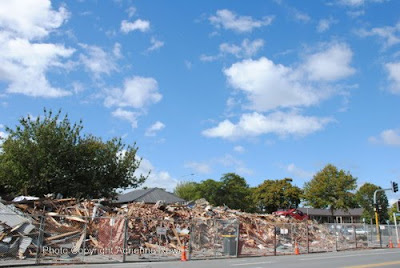 I thought I was over photographing Christchurch earthquake ruins.
I had made a point of stopping in an attempt to regain some sort of normality in my life.
But as I drive about the accessible parts of central and eastern side of Christchurch, I find myself struggling to comprehend the rapidly changing face of this place I now call home. 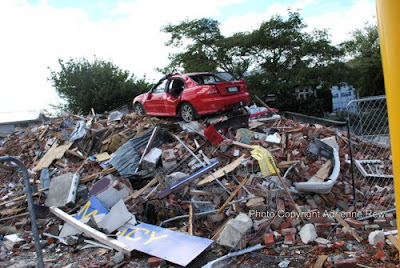 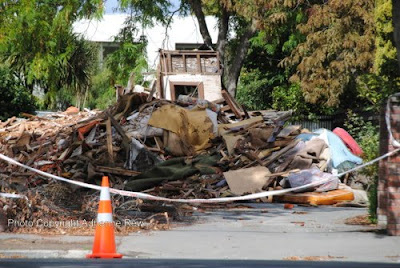 It's confronting to see what was a busy pharmacy (on the corner of Bealey Ave & Colombo Street - the top of these two images above), now a pile of unrecognisable rubble topped with a wrecked car. It's even more confronting to see the torn and broken mass of something (above) that you no longer even remember in its pre-earthquake state. So I have started photographing again - if only to help myself mentally process some of the horrors unfolding around me. I find that somehow, the act of photographing helps make it real. 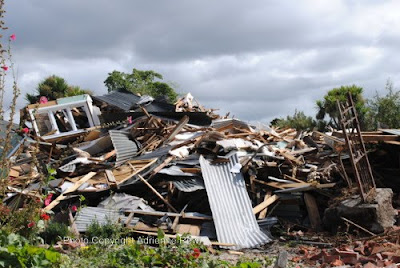 In addition to journalistic pursuits, I also write travel guides for the bestselling American company, Frommers Travel Guides Last year, I spent seven gruelling months writing a new 1st edition - Frommers New Zealand Day by Day, which is due for publication early in 2012. Just two weeks out from deadline, the September 4th 7.1 earthquake struck Christchurch and threw me into a mad panic. I got the guide done thankfully and it was such a HUGE relief that I thought I might sleep for a month at the end of it.
So imagine my horror when the February 22 6.3 struck and devastated much of inner city Christchurch - including many of the key heritage buildings that play such an important role in any travel guide. Now I have to rewrite the Christchurch chapter and I have no idea (yet) what I will put in it- what will be left to put in it. Suffice to say it will be short. In addition, I'm now researching and writing the 7th edition of Frommer's New Zealand and the Christchurch chapter there too, will also be much abbreviated because, among other things, many accommodation providers have simply gone.
Take Hambledon House on Bealey Avenue for instance.
This is what's left of it - above and below.
Once a huge, three-storey mansion with an elegant apartment in the old stables building, it has been reduced to a forlorn pile of rubble and twisted iron. 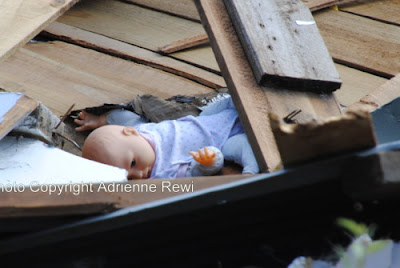 And nothing says sadness to me more than this twisted, broken dolly caught among the Hambledon ruins like some horrible metaphor for all those who lost their lives on February 22. 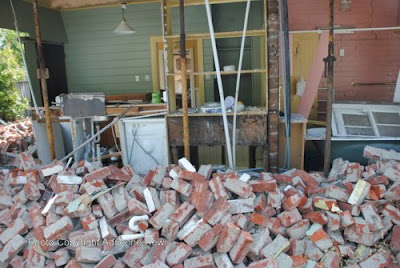 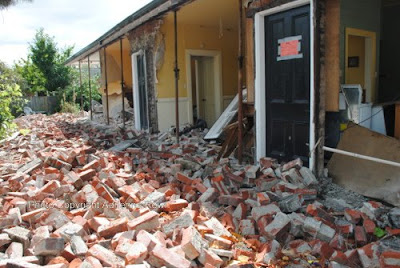 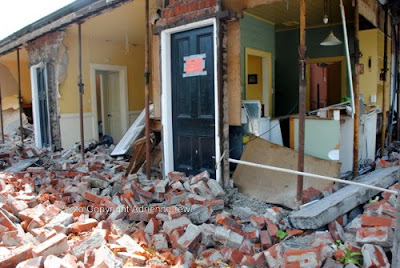 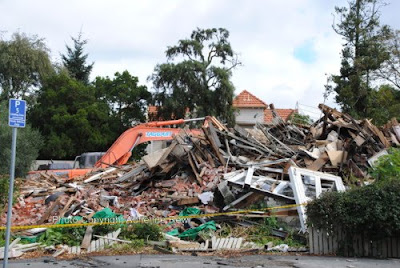 This (above) is all that's left of another big, old, 2 storied B&B, Turret House on Durham Street; and I know of several other B&Bs - not to mention the inner city hotels - that have all sustained significant damage, which is going to put them out of business for many months to come. The Christchurch-Canterbury chapter in Frommers New Zealand 6th edition covers 48 pages. When you consider that probably 90% of the shops, restaurants, bars, hotels and other accommodation providers may have to be deleted in the 7th edition, you begin to realise what a significant impact the earthquakes are going to have on tourism broadly.
I feel sad in a way I can't even quantify. 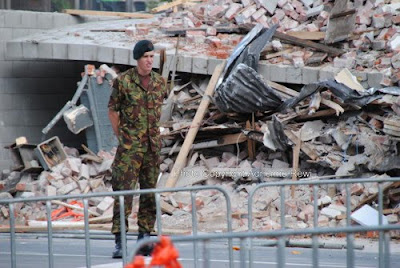 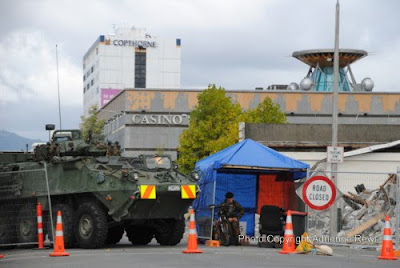 And you know it's all very real when you army tanks and soldiers guarding the cordons currently blocking of the inner red zone of the central business district. 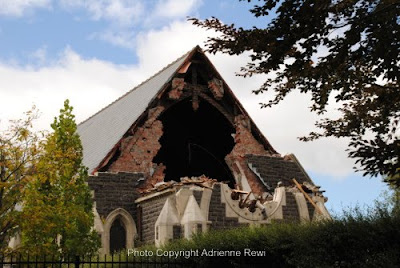 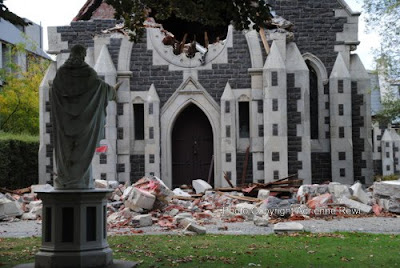 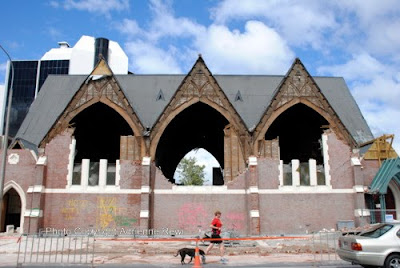 I also feel an incredible sadness at the loss of so many of Christchurch's beautiful historic churches. Anyone who has visited this blog regularly over the past three years will know I have a passion for church architecture, so seeing so many of them crumpled and ruined is difficult indeed. (The Rose Historical Chapel on Manchester Street top two images and Knox Presbyterian Church on the corner of Bealey Ave & Victoria Street above). I'm only pleased that my obsession with photographing churches means I have an extensive record of many of those now damaged beyond recognition. 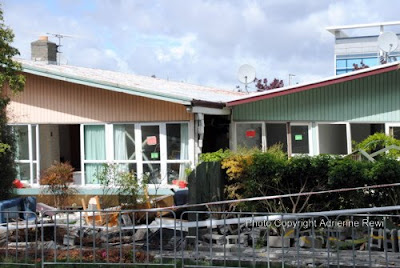 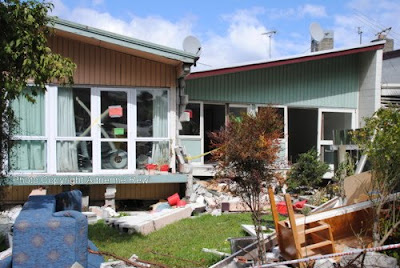 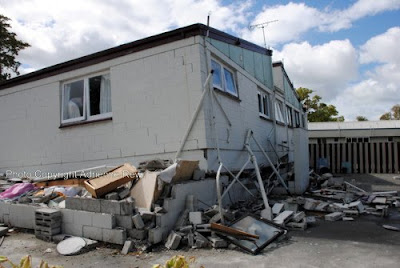 As I write the caption for this last set of three images - a once-2-storied set of flats now sitting at ground level on Bealey Avenue after the bottom level collapsed on February 22, I realise this whole blog entry is all over the place - without focus - much like me and my work habits at the moment. I keep telling myself everything is fine - because frankly, after what has happened in Japan, to say otherwise just seems like self-indulgent whimpering. But it's all relative and you don't have to go far in Christchurch, you don't have to talk with many people, to realise that Christchurch as a city is seriously shattered and its people are stressed. I'm not going to include the standard addendum today: the 'we will rise again, Christchurch will be just dandy again soon' because frankly, I'm having one of those days when all that seems forever away. In the meantime, I have travel guides to abbreviate.
Posted by Adrienne Rewi at 3:00 AM

The photos are just unreal. I think you are allowed to mourn the horrific tragedy that occurred in your hometown without being labeled self-indulgent. There's always someone worse off, but that doesn't negate the suffering of the people of Christchurch. I have spent a lot of time sitting in tears looking at photos of far-off places lately. I can't imagine what it must be like living among it and trying to return to some semblance of a normal life. All best to you as always, and try not to worry about the chapters too much. We will get it sorted out. :)
-Christine Ryan

Ads it all makes me cry - i've never cried so much the past 3 weeks :( and I feel every word in this post the same, thanks so much for expressing it so well. I have such a connection both historical and personal to my hometown of Christchurch, [strengthened with the recent birth of my grandson] and having experienced this earthquake, i was doing the same as you...photographing because i found it a compulsion - it helped with the disbelief - because it's still so surreal.

My connections to so many of those beautiful churches was personal like so many others. My ancestors were married, baptised and had funeral services in them; i was bridesmaid in the Catholic cathedral; my parents married in the now obliterated St Paul's in Cashel Street - we have lost so very very much.

Our cemeteries have suffered much damage and many forget these are fantastic historical places also
:( I am now involved with Friends of Linwood Cemetery and i'll be endeavouring to further research about the souls that rest there...hopefully garnering interest for descendants who would enjoy taking responsibility for some graves or helping people discover their ancestors before their graves totally disappear... my dream!

I for one so appreciate your posts especially as it's from your own perspective not the 'media'and I'm not there to see some of the damage ... i'm back in Auckland and as much as the situation in Christchurch is dire in the Eastern suburbs, i wish i could be back there to support family and people like yourself.

I find it surreal. I even find it difficult to look at ... A nicely expressed post!