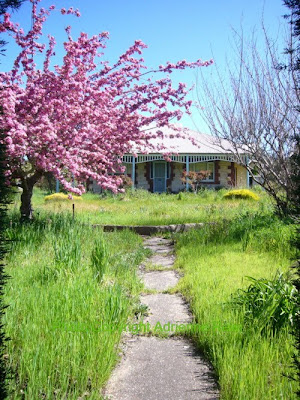 When I arrived in Adelaide for the first time 2007, I never expected to see pink spring blossoms and a bounty of lush green grass - South Australia after all, is one of the driest places in Australia. But up in the Adelaide Hills, things are a little different - cooler for a start - and just twenty minutes from Adelaide City, you'll find plenty of vineyards, wineries, farmlands and artist studios. not to mention cute little villages with names like Birdwood, Stirling, Hahndorf and Lobethal. I took this photograph in one of the small towns we passed through. 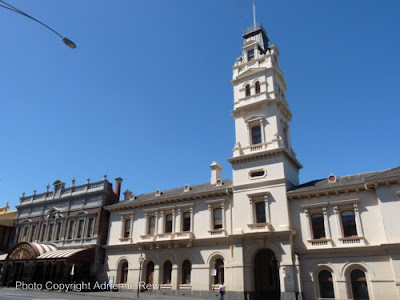 This commanding tower belongs to one of the buildings of the University of Ballarat, in the city of Ballarat, Victoria. Founded in 1870, it's the third oldest centre of higher learning in Australia. Over 25,000 students attend courses in a number of different campuses. This building is right in the heart of the city and I was so busy walking backwards so I could fit the whole tower in my camera lens, that I tripped on a doorstep behind me and just about concussed myself on the massive stone wall of another old architectural beauty - of which Ballarat has a bounty. 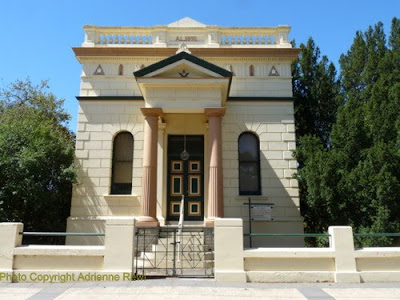 It was while I was driving to Ballarat in 2010, that I passed through the cute little town of Creswick, 18km north of Ballarat and 129km northwest of Melbourne. I HAD to stop. There were so many divine old limestone buildings begging to be photographed - many of them a legacy of the town's early wealth. Named after the three Creswick brothers, who started a large sheep station in the area in 1842, it was at its peak during the Victorian gold rush of the 1850s. It had a population of 25,000 back then. 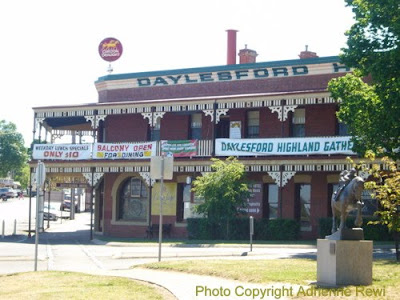 I visit Daylesford often - every time I visit Victoria in fact, because it's not too far from Woodend (an hour north of Melbourne) where I usually stay with family. Daylesford is to Melbourne what Akaroa is to Christchurch, and Waiheke is to Auckland - the perfect weekend getaway, close enough to be convenient and far enough away to be 'of a different world.' Every weekend it's packed with incoming BMWs, Porches, Mercedes and the like and the many classy boutique accommdations and designer stores do a roaring trade. Today it's known as Victoria's Spa Town - which probably originated from the fact that nearby Hepburn Springs (a small village to the north), has long been renowned for its natural spring mineral spas. If you're visiting Melbourne, it's well worth making an overnighter to Daylesford as they also have great markets, cafes and restaurants. The photograph above is of one of their terrific old Aussie pubs.
Posted by Adrienne Rewi at 2:38 AM