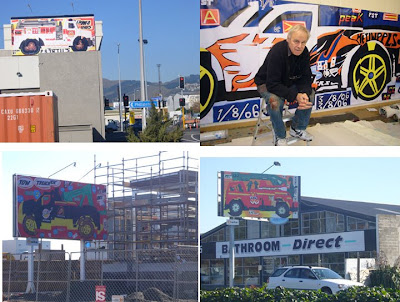 Philip Trusttum City Billboards, Christchurch. 2008. Ajr
In an earlier posting several weeks ago, I talked about one of New Zealand’s most recognised artists, Christchurch-based Philip Trusttum “going large.” It’s happened and today I was out photographing Philip’s magnificent billboards strategically placed on three of the city's main arterial routes – three gigantic works from his series “All What Trucks”, a series of over 28 paintings (so far) completed in the last 16 months. Simultaneously, Riccarton’s Hoyts Theatre complex is screening a 20-second clip of his trucks prior to the main movie in Cinema 5 during May and June; and scaled down versions (compared to the billboards that is – they’re still huge in their original form) will be on show at COCA Gallery in Christchurch during May. How wonderful to see art 'escaping' from the traditional gallery format. www.trusttum.co.nz
Posted by Adrienne Rewi at 4:52 PM