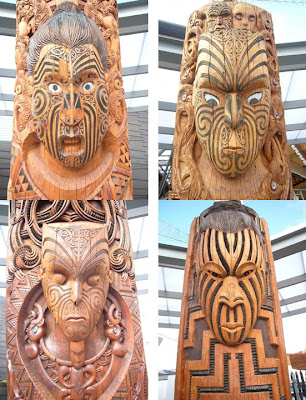 These are four carvings I photographed at Te Puia in Rotorua last year. One of New Zealand’s major attractions, Te Puia opened its revamped facility last year. One of its most striking features is the magnificent sculpture Te Heketanga a Rangi, which forms the entrance to the complex. It features twelve beams reaching skyward, each decorated with an intricate carving. These represent the realm of the Supreme Being from which all things spiritual and physical originated. www.tepuia.com
Posted by Adrienne Rewi at 6:04 PM