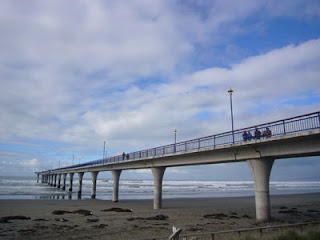 New Brighton Pier, Christchurch. May 2008. Ajr
When I was out at New Brighton Beach yesterday, I took the opportunity to walk out to the end of the pier. It’s only 300 metres long and it’s invariably freezing when you get out there, especially at this time of year - and you could be forgiven for thinking it a bit of an anti-climax. However, the views are almost always terrific – especially looking north across Pegasus Bay toward the Kaikoura Ranges (see earlier sea views). The original wooden New Brighton Pier was built in 1894 and demolished in 1964. This new concrete version was officially opened in 1997. Gone are the days when a pier stroll was a jaunty social occasion complete with penny arcades and music but it’s a popular fishing spot and a lazy amble from the New Brighton Library that now graces the land end of the pier. And every year it hosts Christchurch’s major Guy Fawke’s fireworks display.
Posted by Adrienne Rewi at 1:58 PM