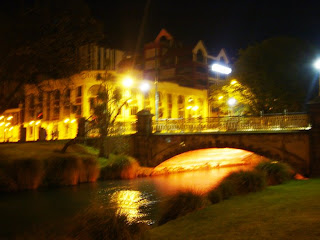 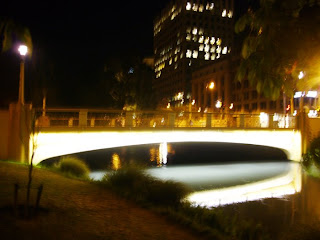 I was in a hurry when I took these shots of the illuminated bridges on the Avon River last night - and yes, I know it looks like it! This is the SCAPE Biennial work - or part of it - by Christchurch artists, Hannah and Aaron Beehre, called "Avon Lights." It looks much better in real life (unlike 'Real People,' which doesn't). Apparently there are movement activated sensors at work here - lights just below the water surface which, according to the catalogue "creates a magical almost mystical experience for passers-by, who are drawn to the water's edge by what appears to be a luminescent apparition under the water."

I missed that bit. Perhaps I hadn't had enough to drink at the nearby bars? Perhaps I was too concerned with the possibility of being mugged on the dark riverbank? Or perhaps I'm jaded and (almost) 'Scaped-out?' For other biennial comments click on Scape Biennial in the label line below. http://www.scapebiennial.org.nz/

Posted by Adrienne Rewi at 2:36 PM