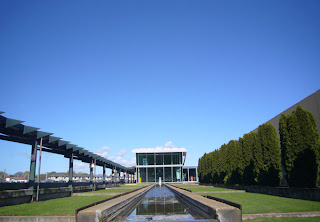 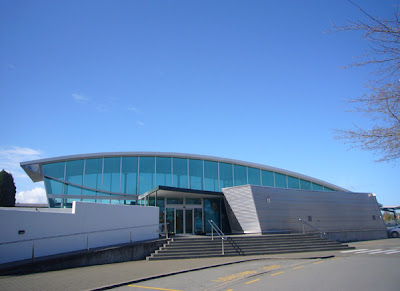 Christchurch Railway Station. Oct.2008. Ajr
Yesterday, quite by accident, I found myself outside Christchurch’s new Railway Station. It’s just as well it was an accident for I’m sure if I’d gone looking for it intentionally, I’d never have found it – and basically I thought I knew where it was; I’d been there before. But in the years since Christchurch architect, Thom Craig designed it (in the late 1990s when he was still with Warren & Mahoney), this delightfully fresh piece of architecture has all but been ‘subsumed’ by the dreadful Tower Junction shopping complex (an architectural nightmare) and, across the rails, the vast, uninspired acres of Turner’s Car Auctions. Furthermore, the place was totally deserted – not one passenger; not one single attendant; no trains. It was as if all the life had been sucked out of the place. It’s a real pity that it now wallows in this modern suburban wilderness – especially when compared to the striking prominence of the former railway station on Moorehouse Avenue (now home to Science Alive). www.thomcraig.com
Posted by Adrienne Rewi at 7:00 AM