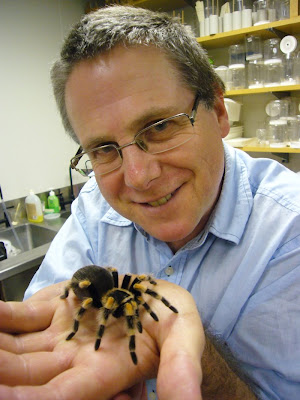 Dr Simon Pollard & Mexican Red-Kneed Tarantula. Oct.2008. Ajr
Another in the Series Meet the People – Ordinary and Extraordinary New Zealanders Doing Interesting Things – Dr Simon Pollard, Curator of Invertebrate Zoology at Canterbury Museum and Associate Professor at Canterbury University’s School of Biological Sciences has been bitten by spiders a good number of times in his 30-year career as a spider specialist but the two he’d be extra careful with are the Sydney Funnel Web and the Black Widow. – “There’s anti-venom for both of them now but being bitten by either would be a very unpleasant experience,” he says. Spiders though, don’t go around biting people – like snakes, they’re more likely to run in the other direction – which makes cuddling up to a tarantula SO much more attractive! Simon’s shown here with the endangered Mexican Red-Kneed Tarantula, which shares the same CITES protected species status as the Panda. He’s currently ‘babysitting’ a couple of these beauties along with the much meaner looking Costa Rican Stripe-Leg tarantula (shown below), a Peruvian Pink-Toed Tarantula and a juvenile Goliath Bird-Eating Tarantula from Venezuela, which can grow as large as a dinner plate and has an abdomen the size of a tennis ball. Simon has travelled the world in the interest of spider research including hunting for blood-drinking spiders in Kenya and fishing spiders in Borneo (which featured in the BBC series Planet Earth). His speciality is jumping spiders, crab spiders and harvestmen. He’s written nine children’s books on spiders and most recently, he’s been setting up Canterbury Museum’s new live tarantula display (shown below). “One of the best things about my job is demystifying the lifestyles of the small and hairy – the myths around spiders are endless and I enjoy the public side of the job – talking to communities and developing exhibitions that educate people about natural history,” he says. For others in this series click on Meet the People in the label line below. http://www.canterburymuseum.com/
Posted by Adrienne Rewi at 7:02 AM