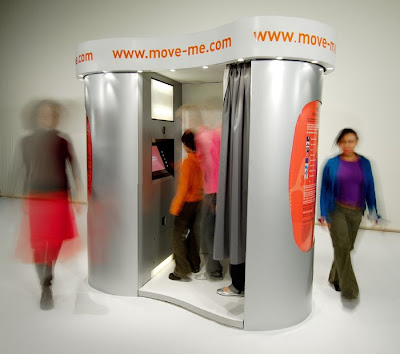 Move-Me.com Booth. Image Supplied by The Body Festival 2008.
I swung by the Christchurch Art Gallery over the weekend to take a look at the Move-Me.com booth, which is part of this year’s Body Festival. Let me just say that it doesn’t look half as enticing as this photograph. In fact, it almost had a peep-show quality to it and even assuming people were doing what they were supposed to be doing in there, was too much for my over-active imagination to grasp. But that’s another story. I don’t want to besmirch a perfectly innocent art/dance installation. The booth – the work of British dance screen artists Katrina McPherson and Simon Fildes – has been critically acclaimed for its “fun, accessible interface and excellent associated website.” It allows you to create your own dance film using provided choreography and then track it on the associated website. Maybe I’ll give it a go next time – as long as no one is peeping.
Posted by Adrienne Rewi at 7:00 AM