Locksley Avenue - A Portrait of a Street 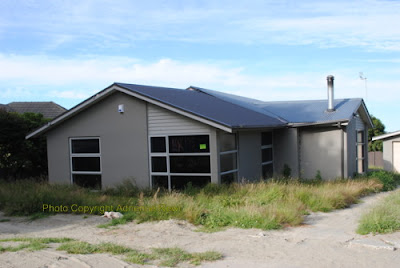 ﻿It’s January 2nd, 2012 and as I write this at 11am, there have already been close to a dozen aftershocks, the largest, mag.5.5 at around 5.45am. This is not what most Cantabrians would have wanted after the last 15 months. Most were hoping for a fresh, much more stable start. 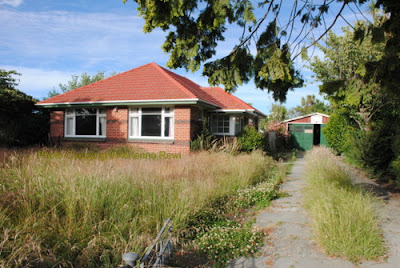 But as I lay awake in bed at 6am, I was just grateful to have a bed and house – albeit a cracked and creaking one – to lie in. Many Cantabrians have lost all that – a fact that was once again brought home to me yesterday, when I went for an early morning bike ride along Locksley Avenue, which runs along the banks of the Avon River in the Christchurch suburb of Dallington. I cycled the length of the street. These are the photographs I took on New Year’s Day. 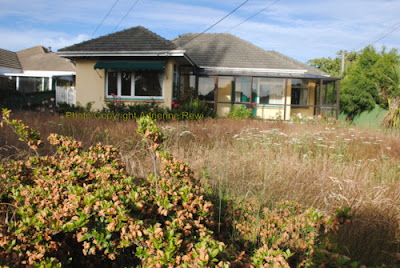 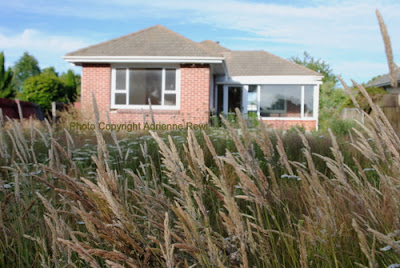 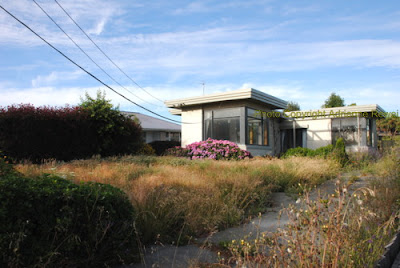 I’ve seen many abandoned houses over the last few months but cycling down Locksley Avenue - in the heart of the Red Zone residential area - was an eye-opener. House after house after house has been abandoned. Of the dozens I passed, there were perhaps six that still appeared to be lived in. The rest sit empty, with once neatly mown lawns now long and shaggy, tickling the windowsills. 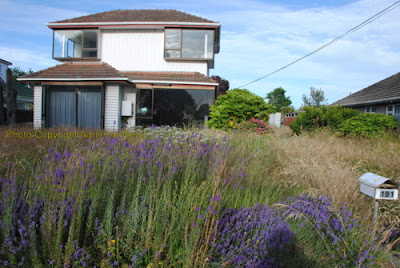 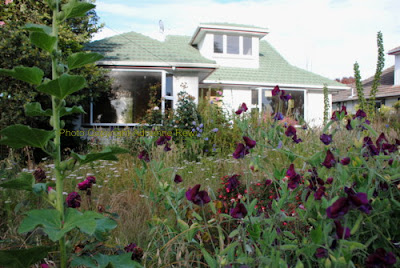 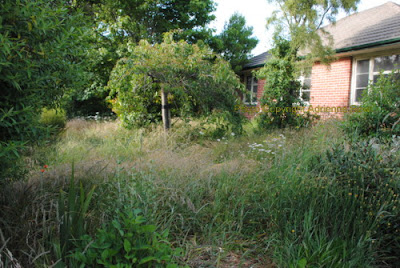 White picket fences are ‘losing ground’ against the weeds, sweet lavender bushes and climbing roses have reverted to wild, uncontrollable behaviour and hydrangeas and sweet peas have taken command of once quiet, orderly garden corners. One or two abandoned homes sport recently mown lawns – it’s as if the owners can’t let go, can’t watch as the homes they’ve owned, sometimes for decades, sink further and further into a state of neglect and dishevelment. 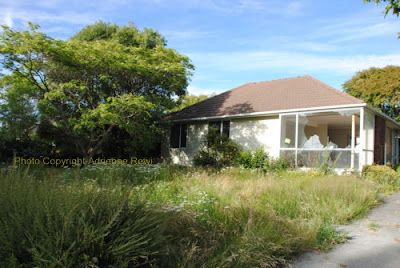 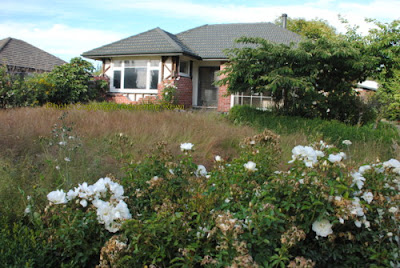 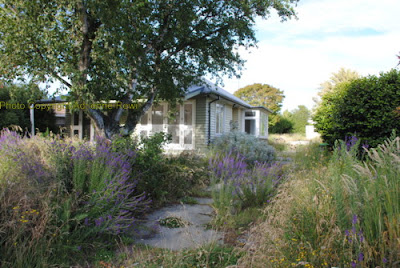 Animal tracks run through the long grass of front lawns, Portaloos sit dormant on the street and driveways and pathways are ruptured by giant cracks and pitted with fresh mounds of liquefaction. 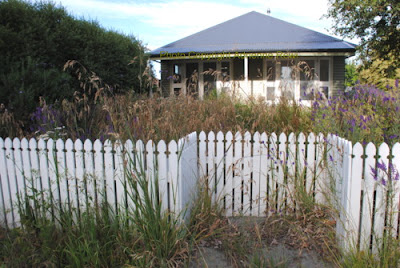 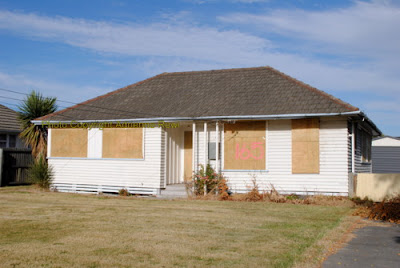 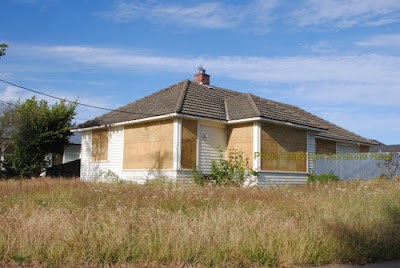 Gulls screech into the lonely air and disconnected power lines sag across the abandoned properties. Baby starlings chatter in ‘luxury nests’ made by winged parents eager to maximise the opportunities afforded by abandoned real estate and an absence of humans. It’s a salutary reminder of just how fast Mother Nature reclaims her spoils if we happen to turn our backs for too long. 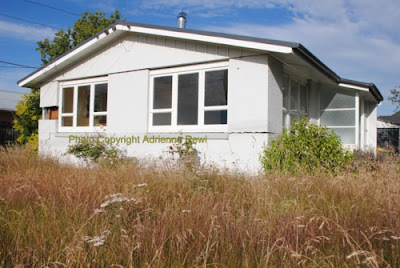 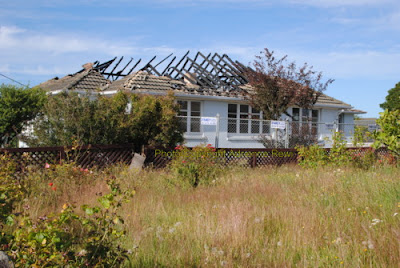 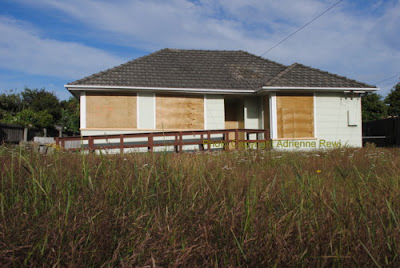 There are houses on a lean, rooms tilting at odd angles. Others  have sunk into the once trusty soil. Garden walls have fallen, windows are broken and front doors swing, open and askew. Tarpaulins flap in the wind and sheets of plywood protect interiors from the elements. 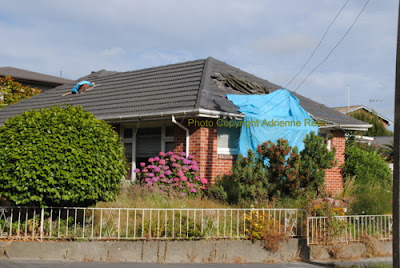 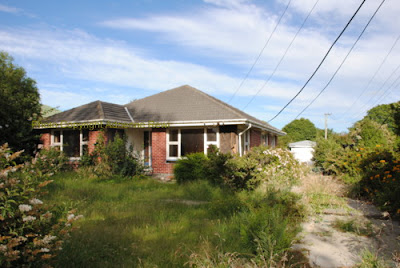 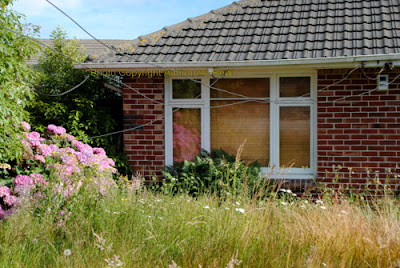 It’s those anonymous plywood ‘faces’ I find the most disconcerting. It's as if the 'soul of the house' has been erased, its history overwritten. Some have been marked with numbers – the number of the property I assume; a number that once meant home. A number that now reads as ‘statistic.’ I often speak of my own home in terms of its number – “my little old 149 is still standing tall,” I might say. It’s a term of endearment for the old ruin I call home. It may not be perfect – and let’s be honest, it was a work in progress even before the earthquakes – but it is my safe haven, my retreat, my security. The people of Locksley Avenue no longer have that.
And Locksley Avenue is just one street among hundreds in Christchurch where this same scenario is playing out right now. It’s a sobering thought - a reminder that no matter how annoying the aftershocks may be, most of us have much to be grateful for.
Posted by Adrienne Rewi at 12:13 PM

Awesome post, your photographs and blog have brought home the reality of the ghost town these suburbs are turning into. I can't help but think of the empty houses in America, people forced to leave their houses through foreclosure?
We are not exempt here in beautiful Aotearoa of the over night catastrophe that is effecting people globally?

Hey, I saw you that day! I was out for a run and saw a couple of people with cameras on bikes. Good on you for capturing it. I run around the river every couple of days and have watched the street slowly transform from a beautiful spot to a shambles. It is sad. I want it to be over.

Thanks for the comments everyone. When I uploaded this post earlier in the week I never dreamt it would get such a huge readership. Clearly, the fate of Christchurch and its residents 'cast adrift' in Red Zones means a lot to a lot of people. And if you live in Christchurch, or a visiting, I really do recommend a visit to some of these areas - not in a sticky-beak kind of way, rather as a reminder that the impact of major earthquakes lives on waaaay beyond the immediacy of shaking ground. - Adrienne

Your comments capture the situation so well-a beautifully written piece about a very ugly situation.
You are right,most of us have much to be thankful for x

9th house down is number 183. I lived in this house until 1977 before emigrating and my father built it.

Thank you for the picture. I understand it has now been demolished.

Great work, keep it up!

Thanks John. I visit Locksley Ave regularly. Demolitions have started here but they seem to moving much faster in the Avonside Drive areas. I guess the pace will increase this year.