Canterbury - A Place of Panoramas 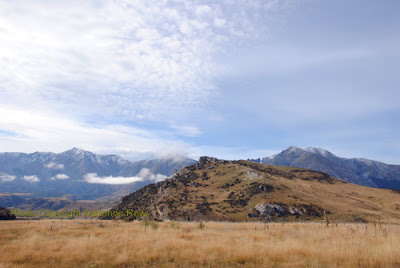 For the last ten months I have been immersed in two things - earthquakes and travel guide writing. Both, as it turns out, equally taxing on the body and mind.
I am physically finished with one and emotionally finished with the other. 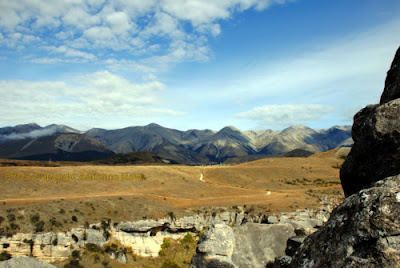 For too long, I have been absorbed by and obsessed with earthquakes and after shocks. My camera is tired of the bleak vistas that Christchurch currently offers. So I am dipping into my photo files to remind myself of the wider beauties of Canterbury - those sprawling golden-green plains that occupy at least 12,000 square kilometers of the province; the spectacular plaited rivers that weave their way from mountains to sea; the tussocky high country with its boulder-strewn foothills and its spiky peaks. It all sounds like such a tourist cliche but it's true - and it's even better in real life. 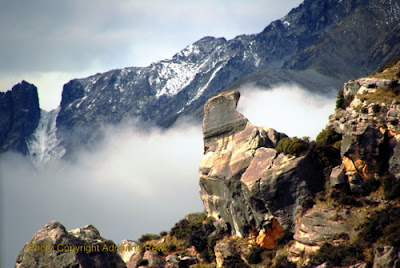 I took these images near Castle Hill, in turn near Porter's Pass in February. That's about 90 minutes or so from Christchurch. I went there to escape the constant after-shocks for a few days. It's a landscape I've always adored and it should have been a perfect retreat - silent, peaceful, remote - yet, like most Christchurch residents these days, I spent most of the time wondering where I would run to if an earthquake struck, which boulders would hold fast, which mountain faces would collapse in an unstoppable torrent of shingle and stones. Five months and many hundreds of after-shocks on (over 8000 since September 2010), it seems a silly self-indulgence and a waste of a perfectly good escape but I suspect if I were to drive up there tomorrow, I would still experience those same thoughts and insecurities. That's the thing about the earthquakes I resent the most - not the obvious destruction, the mess and the physical losses, but the way they have tampered with my own sense of self, my own sense of surety and my normally adventurous spirit. I feel I have grown 'smaller' in the face of this constant shaking and battering, that my urge to move beyond the comforts of home to the unknown and untried is diminished. That bothers me because I want my life to be a panorama, not a vignette. 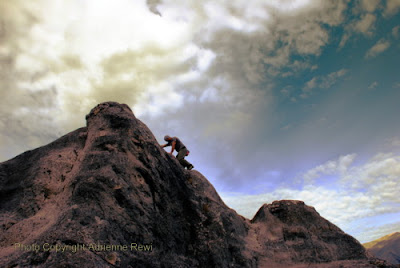 My eldest son from Australia came to Castle Hill too. He knows the meaning of adventure. He knows how to climb mountains - both physically and metaphorically; and as I watched him blithely climbing every rock face in sight while I cowered at the bottom wondering about rock falls, I envied his personal certainty. I know I have that certainty too. It's just been 'smudged and blurred' and tested more times than I can count in the last months. I just have to tease it back out again. I hope it won't take too long. I hope the earthquakes haven't made me less brave, less adventurous. 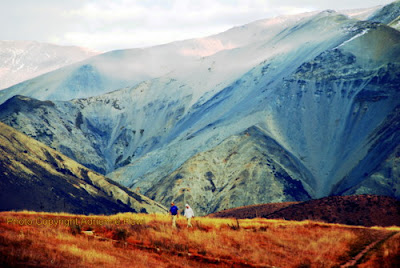 Because there are too many landscapes like these Too many magnificent panoramas yet to explore. I want all the grandeur, all the minutiae the world can throw at me I have always been a person of the land, of Nature. I suppose that's why I feel 'betrayed' by the recent events in Christchurch. Nature no longer seems reliable and dependable. Yet for all that, I think it will be through Nature, through my love of the land, that I will regain my 'larger spirit.' I'm certainly ready for that. "Nature is an excellent sedative. It pacifies, that is, it makes a man carefree. And being carefree is of the essence in this world." Anton Chekhov.
Posted by Adrienne Rewi at 2:40 AM

I think we are all affected this way - and it is normal... and with time it will all pass...

Home has become increasingly precious, a safe haven, and that means more to me right now than traveling. I have managed short trips to Auckland and Hamilton, but pleased to return, despite all the shakes. I also know that I will travel again, one day, when things settle down and home is safe while I leave it.

You touched on a favourite subject of mine, panoramas. I go one step further and like them with horizons exactly centered between land and sky. At the moment I ghave a dozen such slices rotating omn the main page of my website billirwinarts.com, I reckon you might like them :)