In the Footsteps of Pioneers 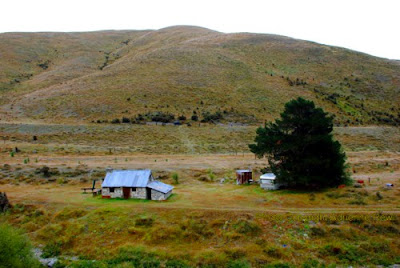 It was a grey, drizzly day on Four Peaks Station in South Canterbury on February 22, 2011 and I was huddled by the fire in Sutherland's Hut [above], (on the Fairlie side of the property), drinking tea and munching on lunchtime sandwiches with four others, when the massive 6.3 earthquake struck Christchurch at 12.51pm. None of us felt a thing. 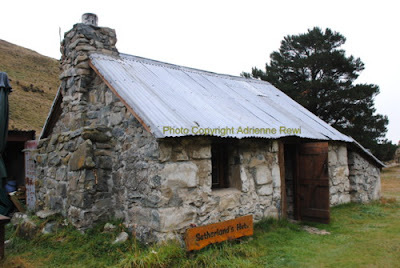 Sutherland's Hut was built in 1866, by James Radford from Timaru, a stonemason, who had come out from England. It is believed to be the oldest surviving early stone shepherd's hut in New Zealand and when you're there, you may as well be a million miles from anywhere. The hut sits on a low ridge just above a pretty stream and is surrounded on all sides by the huge, rolling green hills that characterise much of the South Island's remote high country. Four Peaks itself is owned by Steve and Jo McAtamney, who have spent a great deal of time and energy restoring the shepherds' huts on their 15,000 acre property, so they can be used as comfortable retreats for those who do the 3-day Four Peaks High Country Track. Walkers do a 40km circuit across spectacular landscapes, following the route of the pioneer fencers and musterers used in the 1850s (mountainbikers can do 60km); or if you're short on time, as we were, you can do the The Pack Run, which takes you the same route (in 4-6 hours) by 4WD vehicle. 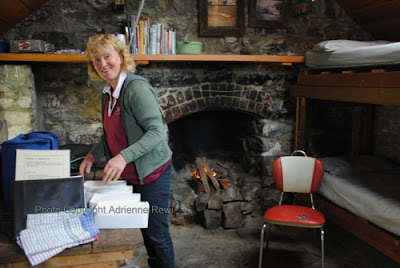 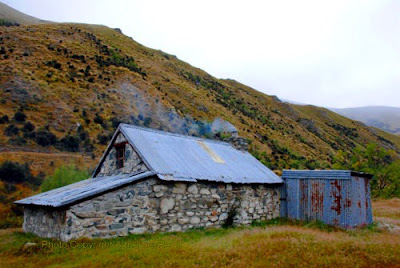 However you make your way across the Four Peaks Range, there are astonishing views of Burke's Pass to the southwest and right down to Moeraki and the eastern coastline. Fiery Pass at 1,284m is the highest point on the Pack Run and Walk. On the Geraldine side of the station, the farm gets 40-60 inches of rain annually; on the Fairlie side it gets 28 inches.
I have huge admiration, not only for the early settlers who tamed this temperamental land as best they could, but also for the modern-day farmers like Steve and Jo, who devote their lives to continuing the back-breaking tradition. It requires a certain sort of determination, passion and commitment to make a go of farming this sort of rugged country. And I love the generosity that sees them sharing these remarkable landscapes with others. 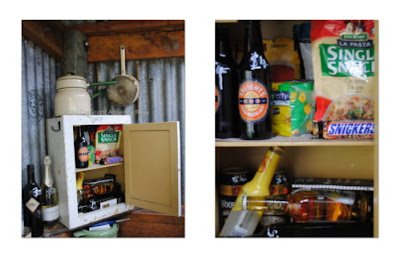 They've made the three huts on the walk - Pleasant Gully, Sutherlands and Devil's Creek - warm, cosy and comfortable, with bunks, fireplaces, flushing toilets, showers and even a miniature shop at Sutherland's, where you can pick up a bottle of wine for $25. 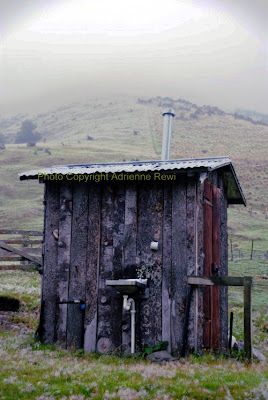 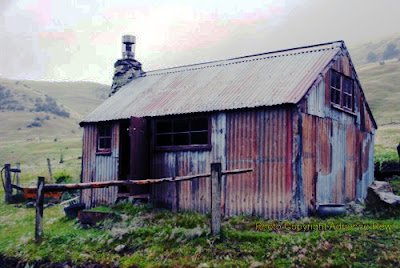 Pleasant Gully Hut (above, with the toilet and shower block in the upper photo), was built around 1900. It's the classic little corrugated iron shepherd's hut and was used as the musterers' base hut in the early days of the station. It's been repiled and lined with beautiful Oregon timber - and as tiny as it seems, it comfortably sleeps four. It's the spot where the 4-5 day sheep muster would usually begin and end. Because the high country track is steep in parts, the Pack Run by 4WD is very much weather dependent. The track is open to walkers and mountain bikers from November through April. It costs around NZ$275 per person to bike, NZ$295 per person to walk and the pack Run costs NZ$325 per person. Money well spent if you ask me.
And, as it turned out, it was a pretty safe place to be during a Christchurch earthquake!
www.walkfourpeaks.co.nz
Posted by Adrienne Rewi at 3:00 AM