Why Is This Real and Not That? 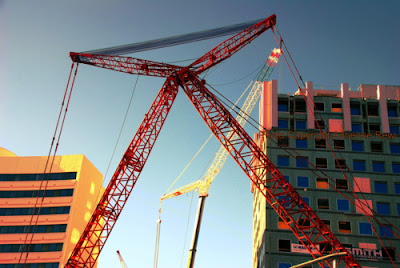 I am philosophically opposed to the idea of a static life.
I like change and all the unpredictability and uncertainty that comes with it.
But some days in post-earthquake Christchurch - when your future seems to be at the mercy of politicians and bureaucrats - I find my myself momentarily yearning for the old, pre-quake simplicities. 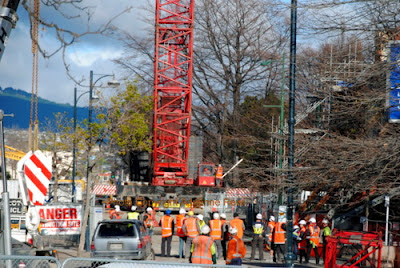 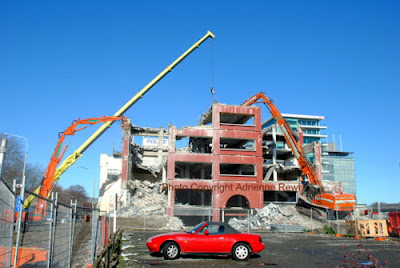 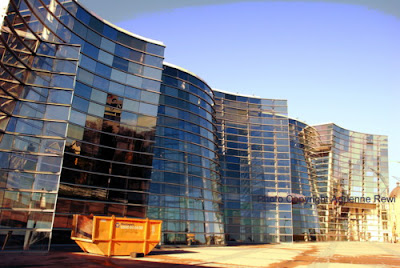 But then I see a sports car in front of a demolition site, a rubbish skip in front of our glossy  art gallery, or dozens of men in orange jackets standing around in awe, as a huge demolition crane is marched into place. Then I pick up my camera again and I roam the central city, or some sad, derelict, residential zone in the east, once again celebrating and cataloguing the unexpected. For me, it's a way of making sense of visual confusion, of the ghosts of buildings gone, of the family histories torn assunder. It's a way of adjusting to an unpredictable way of living that is likely to be permanent now, in my life time. 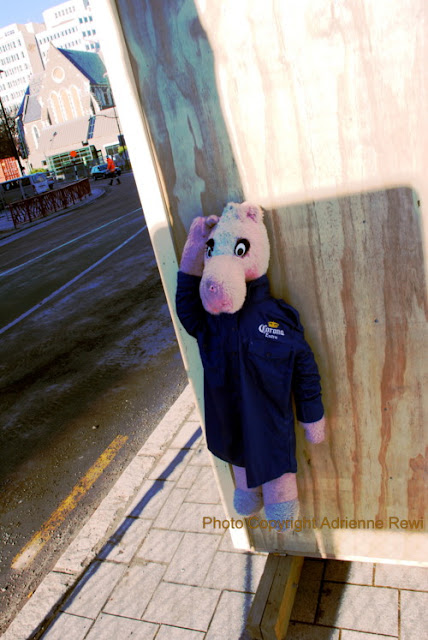 But for every frustration, every incovenience, there is a moment of amusement - a pink bear acting as some kind of mascot at a military cordon base for instance 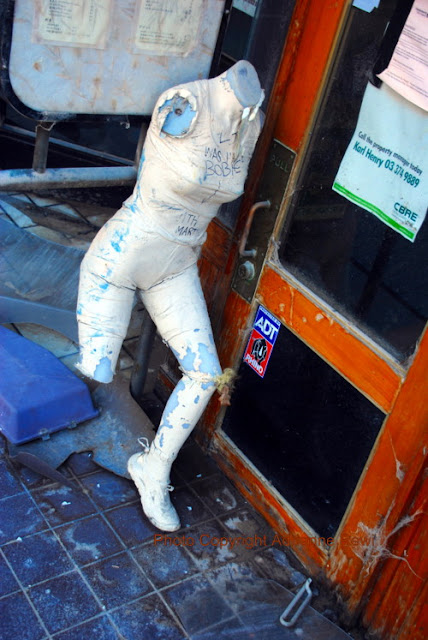 - or a shiver of unease in the presence of a twisted mannequin seemingly 'ready to run' from the destruction but caught in a time warp. 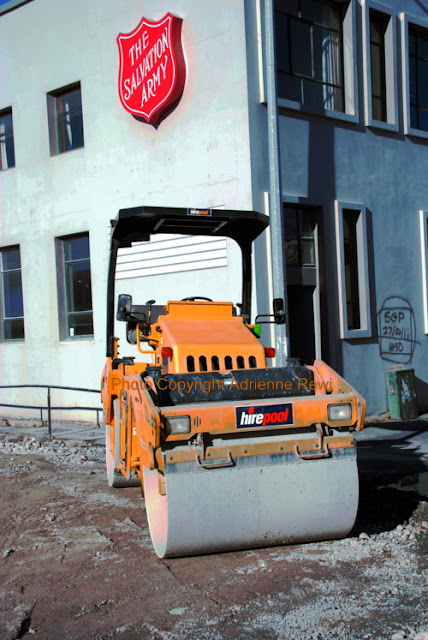 Or a wry moment when you spot a juxtaposition that triggers a dozen other bewildering lateral thoughts - like the irony of our 'salvation' arriving in the form of a mechanical roller and  an army of demolition machines. 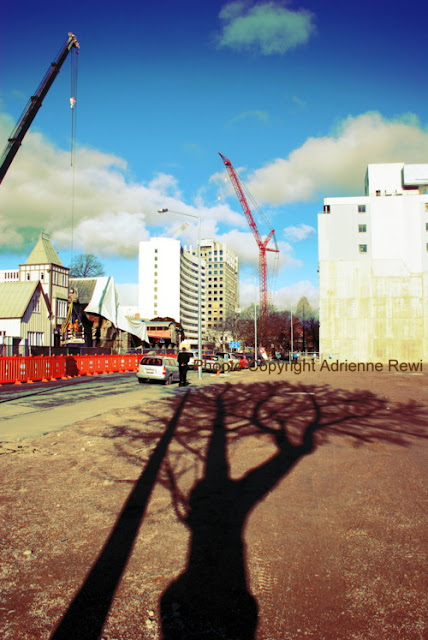 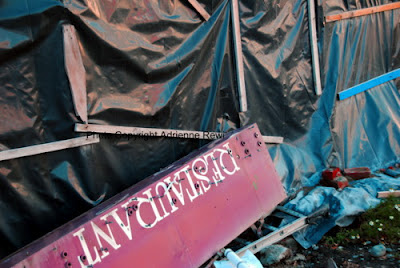 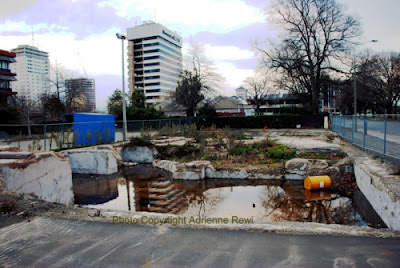 and the creepy, cavernous building basements, hollowed out and filled with murky, stagnant water 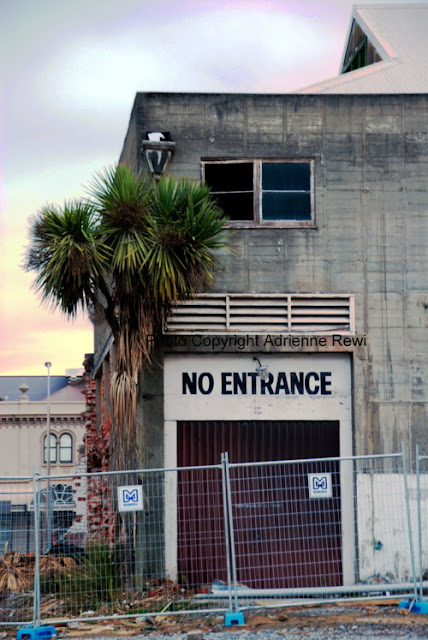 I find a strange beauty in the raw, exposed concrete - in that whole haunting, shut-down side of a city in distress. I am both annoyed and visually excited by the fences, the barbed wire, the cordons, the signage. I respond time and again to the almost war-like quality of the ruins. It's as if I'm photographing some strange, other place that I remember from images of eastern  Europe. It's as if photographing will somehow bridge the gap between this new reality and the memory of the prettier, easier city that lives in my head. 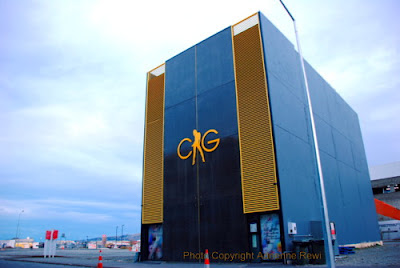 I have moments of wry laughter - this for instance: the secretive, box-like form of new strip club, Calendar Girls, opened just before the earthquakes, amid a stretch of quaint historic buildings. There were mumbllings of classic, conservative, Cantabrian outrage at the time. Now it is the only thing left standing in the block. I can't help thinking that it's a comical metaphor for something I haven't yet pinpointed. 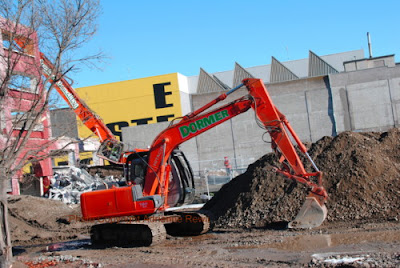 I like that, in times of crisis and inconvenience, art has been forced out into the community - always a better place for it anyway, I've always thought. Now we see works amid the ruins - the emphasis being on the word SEE (for those in the community who never set foot inside art galleries). Kay Rossen's work on the east wall of the Christchurch Art Gallery is one of my favourites currently - but I prefer it glimpsed through the veil of demolition. I like the cheekiness of a giant E peeping out through cranes and diggers. It makes me think much more carefully about both the work itself and the messy, unpredictable context of its being. 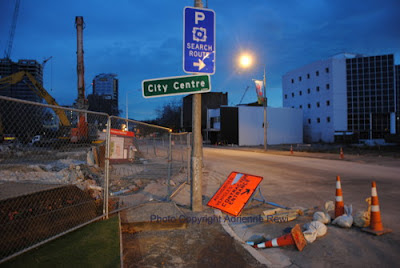 And then there are the night time visits to central city.
That time, just after dusk, when workmen have gone and an eerie, bleak silence envelops the ruptured cityscape. I delayed going into the city at night for many, many months. I didn't want to tempt fate. As much as I like an adventure, I didn't want to risk being caught in there in the dark, during a large after-shock. 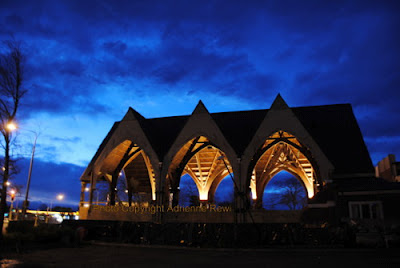 But now, almost two years after that first beastly earthquake on September 4, 2010, I find myself drawn back there at night. Being there, in the velvety silence, pushes my creative buttons. It makes me think about history, about the people who have gone before. It somehow intensifies the disappointments of the present and the possibilities of the future. It focues me in the single moment. 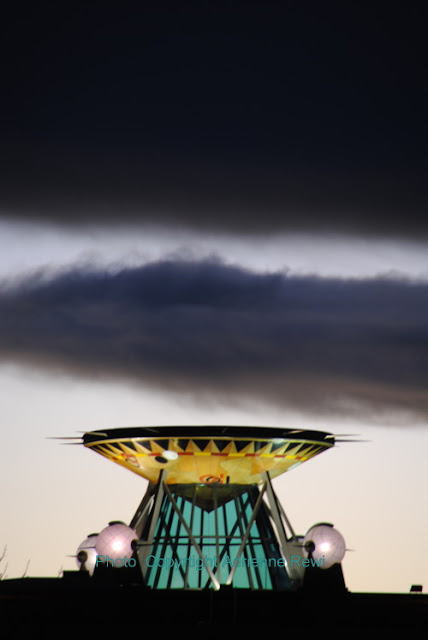 And then I look up and see the futuristic form of the Christchurch Casino etched against a black, forbidding night sky and it might as well be that aliens have landed. 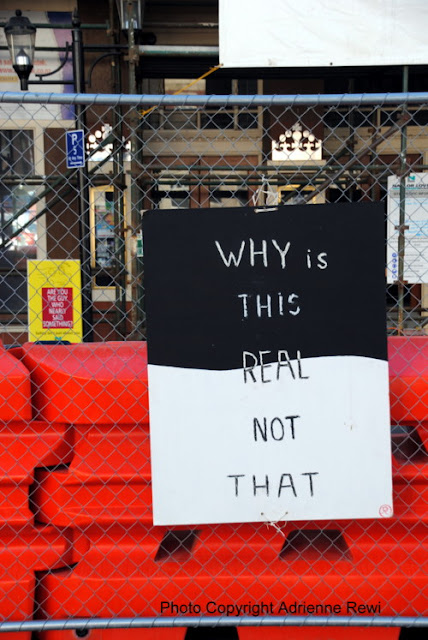 And why is this real and not that?
Posted by Adrienne Rewi at 9:51 AM 1 comment: