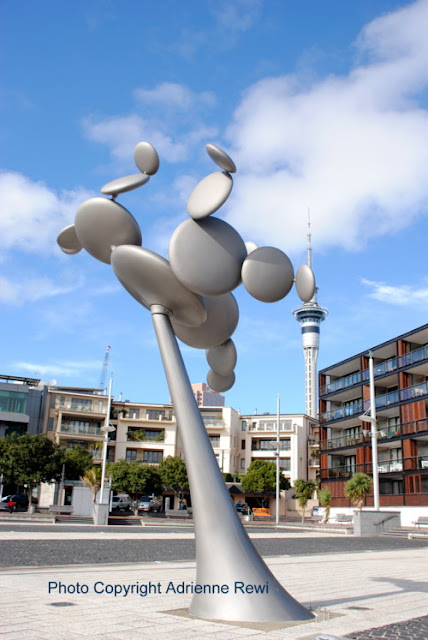 Phil Price Sculpture, Auckland Waterfront.
Yesterday, quite by chance, I banged into an artist friend in Merivale Mall. He was re-sizing some of his photographs to make cards and I was taken by how many similar images I had on my cellphone - Similar in subject matter at least.
We seem drawn to the same things.
That's not uncommon among photographers of course- nor in fact, among anyone of a creative bent, whether they be painters, writers, film-makers; we frequently visit and re-interpret the same material, always imbuing it with our own perspective, our own emotion and history. 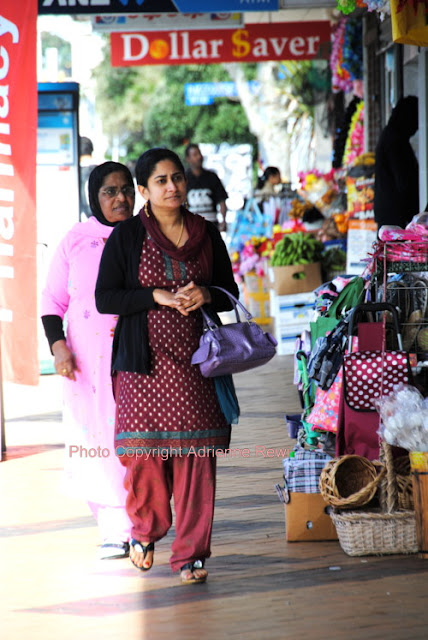 New Lynn Shoppers
In light of that encounter, I decided to put together a selection of my 'visual rememberings' from my recent trip to Auckland - a sample of the diverse inspirations that caught my attention for reasons obvious and reasons unfathomable. It set me to wondering what my artist friend - who declared "I hope to be a photographer in my next life" - would have taken away from the same locations. 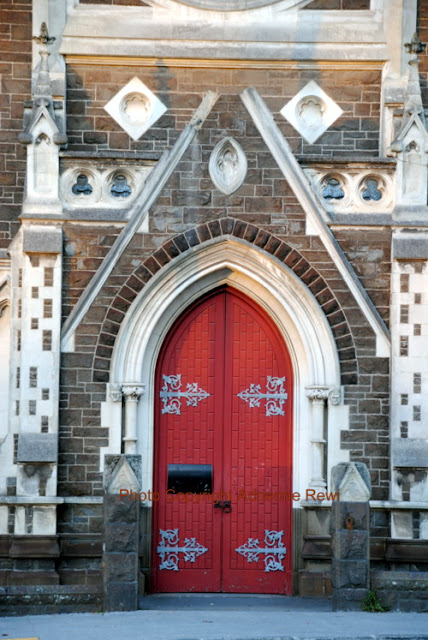 Church Door, Symonds Street
That concept of several photographers approaching the same subject is one that has always interested me. The way we all approach the world, the way we see - each of us influenced by our emotions, our passions, by what do and don't know. That split second that captures a moment of your experience and a moment perhaps in the life of someone else. 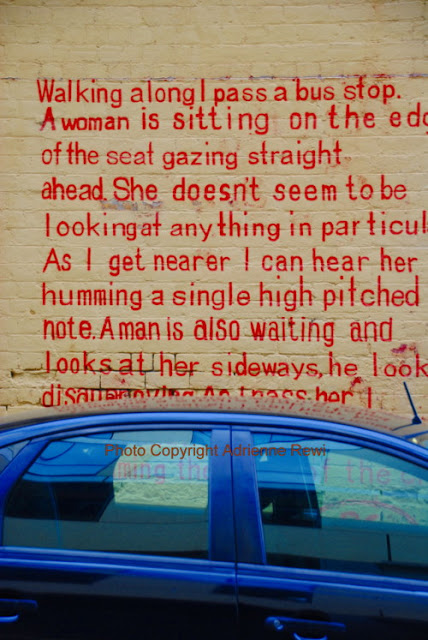 Street Poetry, Britomart
We may be captivated by a feeling, a shadow, a glimmer of light.
Our image may be a reflection of a thought.
It may be driven by some vague, niggling memory. 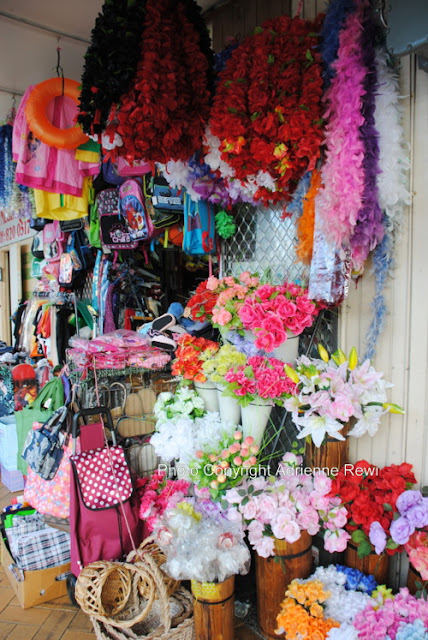 Household Goods & Artificial Flowers, New Lynn
I know that as I amble about a city, some things just 'speak' to me. I don't always know why but I know I can't leave them behind without somehow trying to capture the essence of that feeling in a lasting image. And often, after I'm home, sorting through hundreds of photographs, they fall into obvious groupings with no encouragement from me.
It's as if I have some intangible, pre-wired  selection process going on in my subconscious. 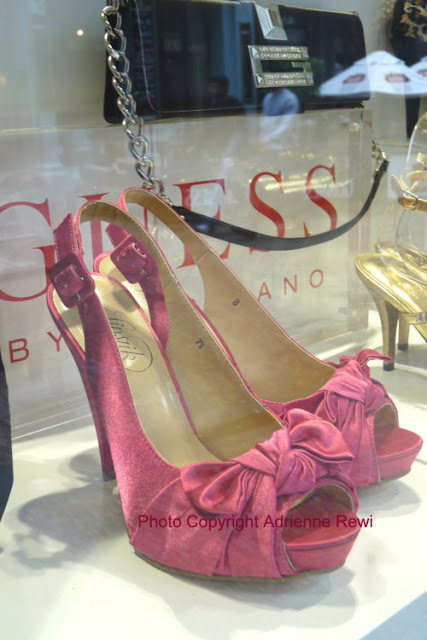 High Street Retail
I do also, quite consciously, photograph on a large number of ongoing themes - variations of a subject, collections of a series of moments, objects, people, places, colours. 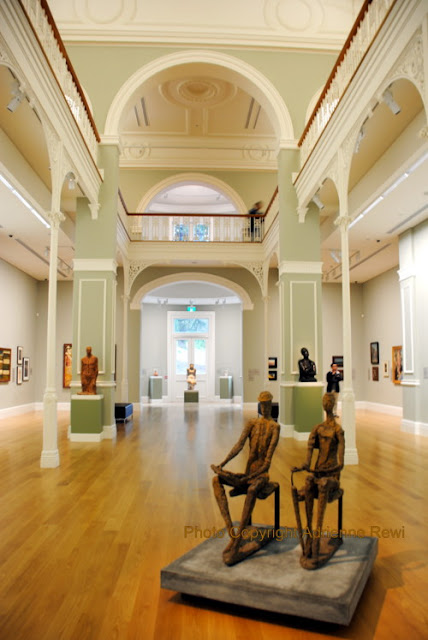 Auckland Art Gallery
And for me, there are themes within themes. Take architecture for instance... I have different photographic collections for barns, old shops, museums, details, churches and so on. There seems to be something in my psyche that likes the order and the variation of that. 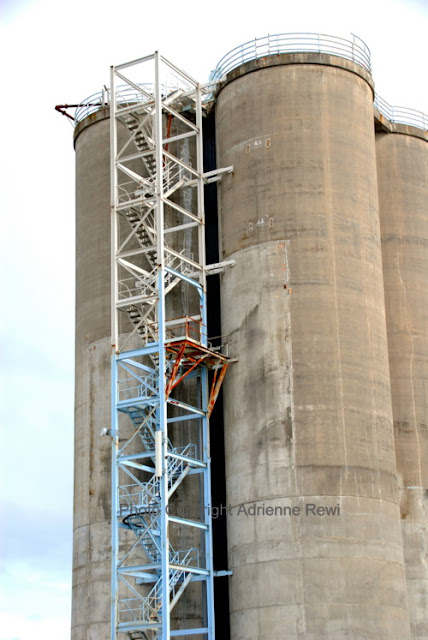 Grain Silo, Auckland Waterfront.
I like stairways. I photograph hundreds of cranes.
I like the mechanical detail, the rigid yet variant forms. 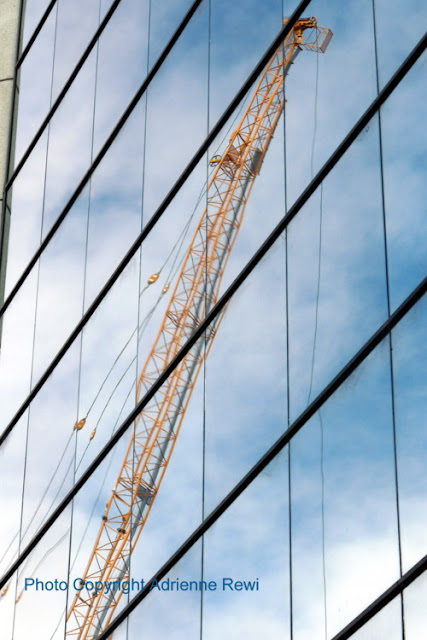 Crane Reflection, Hobson Street.
I can rarely walk past a good reflection - and when the crane *is* the reflection, so much the better - two birds with one stone and all that. 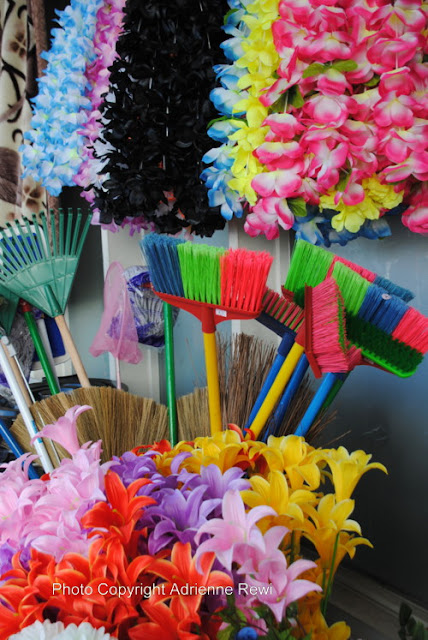 Leis & Brooms, New Lynn
There are images that tap into my personal history.
There are displays of colour and shape I cannot ignore. 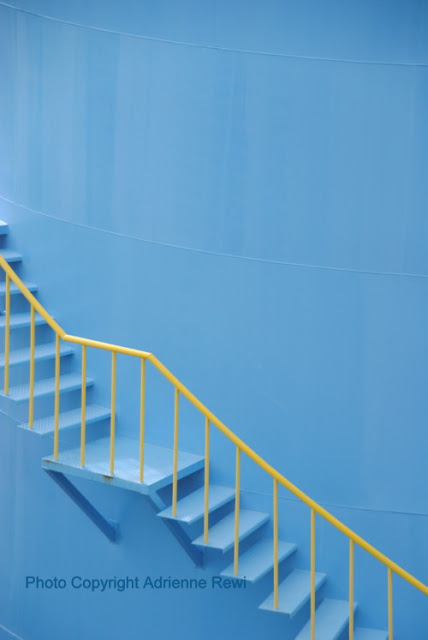 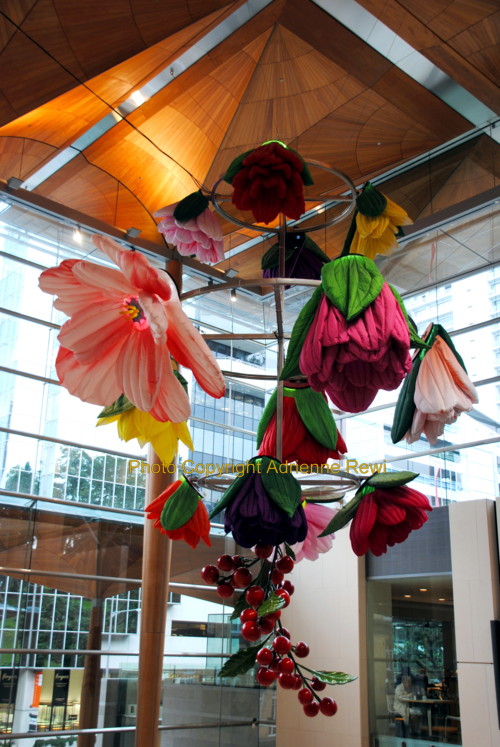 Flower Chandelier, Choi Jeong Hwa, Auckland Art Gallery
Sometimes I record an image for the beauty of a form, or for the wider implications of the moment - who I was with, what we were doing, the things we shared - in that moment. 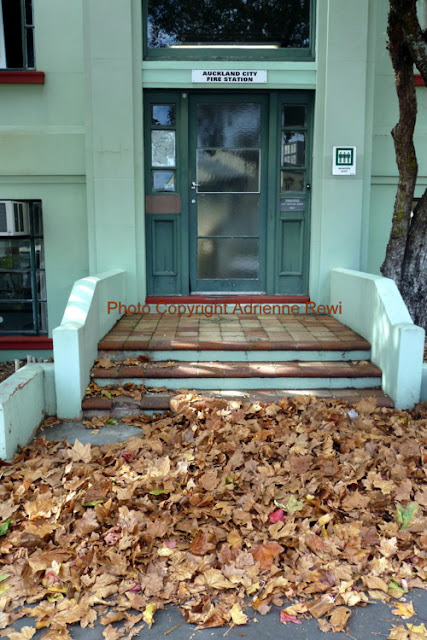 Auckland City Fire Station
And other times, it's like there's some mysterious rustling going on in my head.
Its purpose isn't always clear but I know I have to listen.
It is those moments - those unfathomable seconds - that often produce the images I love most, the short stories I am happiest with.
And sometimes at the end, I find the collection in its entirety is a collective snapshot of place.
This was my Auckland, on those ten days.
Next time it will be different.
Posted by Adrienne Rewi at 11:47 AM No comments: 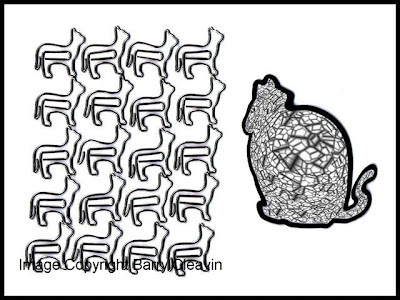 "Fat Cats Rule"﻿
More from one of New Zealand's leading printmakers, Barry Cleavin - always willing to share his wry observations of the world we live in. For more in this series, click on Cleavin in the label line below.
Posted by Adrienne Rewi at 5:00 AM No comments: 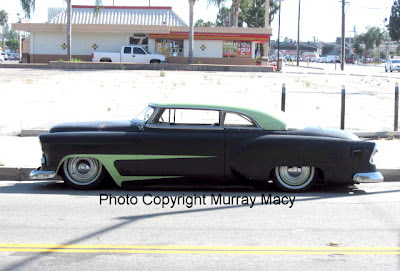 It's been so long since I added to this series that I've forgotten where I was up to, so, to right matters, I'm doubling up and presenting two beauties that were snapped by my brother in Los  Angeles. The top car remains a mystery to me. I've lost my notes so any car experts looking at this will have to do their own guesswork. 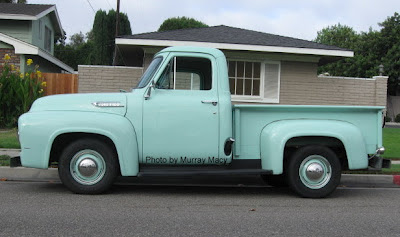 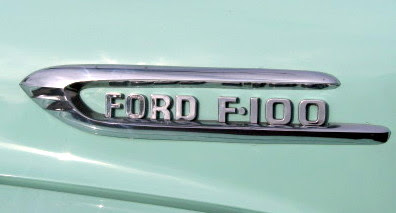 This little cutie meanwhile, is a 1953 Ford F100﻿ and after chatting with the owner, my brother Murray assures me the engine and transmission (with overdrive) are original. If you'd like to check out some of the many classic cars I've featured previously on this blog, just click on Cool Cars in the label line below.  There are dozens of them to discover.
Posted by Adrienne Rewi at 5:00 AM No comments: 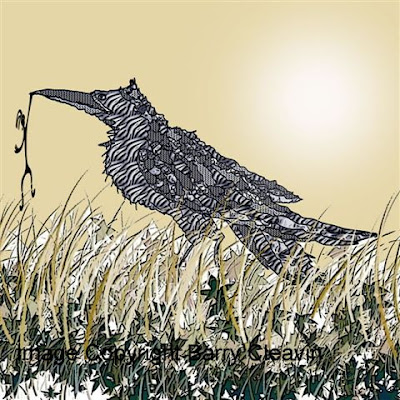 "A Man-Eating Crow"﻿
After a considerable interlude, we return to the lively submissions from one of New Zealand's top printmakers. Stayed tuned for more - or, click on Cleavin in the label line below to see the many earlier offerings.
Posted by Adrienne Rewi at 5:00 AM No comments:

Art in the Bush

It’s a time for art – as opposed to earthquakes. For the last two years, I’ve been so focussed on documenting the changing face of post-earthquake Christchurch, that my usual posts on my other passions – art, architecture, design and general ‘visual paraphernalia’ – have slipped by the wayside. But it’s not for a lack of thinking about them; and ever since I was introduced to the on ’s in May, I’ve been planning to share some of the highlights.

When a friend suggested the visit, I was apprehensive. I hadn’t heard of the park – despite it being billed as “’s leading sculpture park” – and I imagined giant tin koala bears, stone kangaroos and wooden wombats cavorting across the landscape. I needn’t have worried. The place is astonishing and quite the best sculpture park I’ve seen in a long time.

Set in 16 hectares of bush and landscaped gardens in Langwarrin, 4kms east of Frankston on the Mornington Peninsula, it attracts thousands of visitors each year. While the modern gallery presents an inspiring and engaging range of changing exhibitions and public programs, the outdoor sculpture collection showcases over 70 works by prominent Australian sculptors such as Inge King, Lenton Parr, Clement Meadmore, Anthony Pryor and Norma Redpath along with, recent acquisitions including Rick Amor, Peter Corlett, Robert Owen, Lisa Roet and Ken Unsworth – and I was thrilled to discover, three works by Christchurch sculpture, Phil Price, including the top work shown above, which Rupert Murdoch and his family commissioned for their mother, Lady Elisabeth Murdoch’s 100th birthday in 2009. (She is now 103).

""Spillwater 1966-67" Matthew Cox & Darren Davison, Australia
(One of my favourites - so quintessentially Australian)

Not actually an artwork at all - just a buoy in the lake. But it was my favourite shot of the day.

I forgot to get the name of this work - I was so duistracted by its reflection in the lake, not to mention that buoy.

Another of my favourite pieces that I forgot to name.

Finishing where I began..... the unnamed man in the trees.

And, because I'm never far from either art or earthquakes these days, here's a very happy combination - Michael Parakowhai's Bulls, currently on show in Christchurch on a now-vacant city lot.

The Bulls of course are part of another whole story about the flourishing of art in Christchurch's earthquake-torn public spaces. In the absence of galleries, art has taken to the streets...... but more on that another time.

Posted by Adrienne Rewi at 4:32 PM No comments: