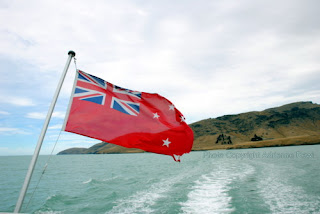 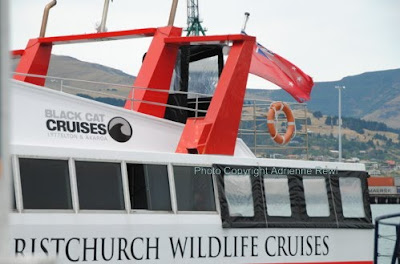 If you're looking for things to do in Christchurch, you don't have to go far - just over the Port Hills, in Lyttelton (New Zealand's third largest port), you'll find the team at Black Cat Cruises ready and waiting to take you out on the water with their Christchurch Wildlife Cruise. A couple of days ago, I did just that. I'd been lured along with the promise of sightings of the rare Hector's dolphins and a two hour cruise around Lyttelton Harbour. The sun was shining, the skies were blue and I couldn't find any good reason to decline. I was joined by about 22 others - mostly tourists from assorted European and Scandanavian countries, and a couple of Japanese girls. 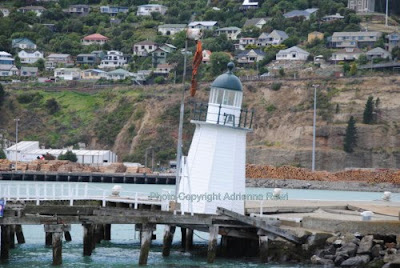 It's always intrigued me that Lyttelton Harbour is actually the crater of a massive volcano that erupted eons ago. You can still see evidence of that in the cliffs (crater sides) around the harbour (see bottom image) and the boat's crew are very good at pointing out the best of the geological features along the way. Here in Canterbury, we're quite tuned into natural disasters at the moment and it was interesting to see how the 7.1 earthquake on September 4th has impacted on the cliffs around the harbour. More immediately, on the little lighthouse that sits in the inner harbour (above). It's now on a distinct lean after its foundations were shaken loose in the earthquake. 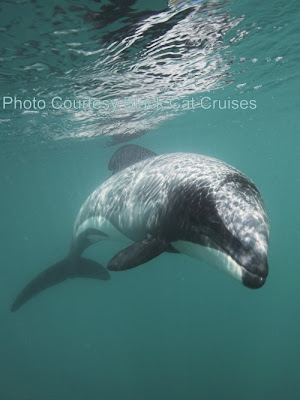 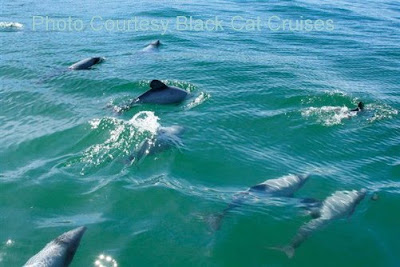 And so to the dolphins. I must point out that although we did see Hector's Dolphins on the trip - just three - my photographs of a few fins poking out of a vast expanse of water are simply too embarassing to display here, so many thanks to Black Cat for the loan of these stunning images. As they point out, they have hundreds and every one of them is beautiful.
The Hector's Dolphin - Tutumairekurau in Maori - is native to New Zealand and is one of the smallest and rarest dolphin species in the world. They grow to about 1.2m (4ft), which is significantly smaller than the Bottlenose Dolphin, which grows up to 3m in length, or roughly the length of a small family car. They were named in honour of Sir James Hector (1834-1907), who examined the first specimen. Born in Scotland, he was the first director of what is now the Museum of New Zealand and was New Zealand's most influential scientist of the time. 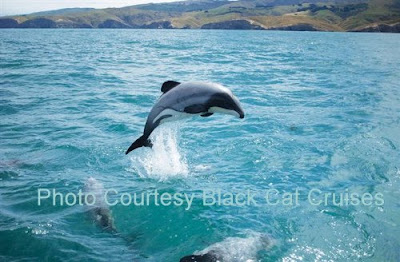 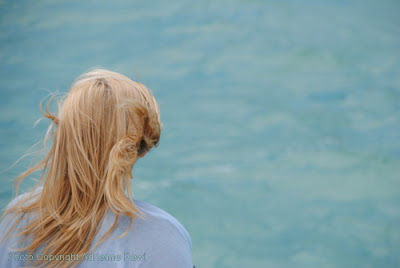 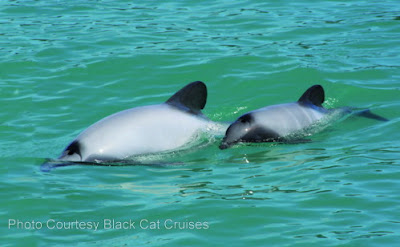 It's estimated that there are just 6,000-7,000 Hector's dolphins and around 1,000 of those live around the Banks Peninsula coastline. Our captain on the day suggested we "look out dorsal fins - small, dark and rounded like Mickey Mouse's ear," which, it has to be said, is easier said than done when you're trying to programme your camera while clinging to the boat's rails as it surges through the rolling ocean. But, as promised, right out by Beacon Rock, we spotted a trio of the little beauties, frolicking in the waves. There's something universally pleasing about dolphins. I've never quite worked out why we humans all go slightly potty over the sight of them, but I can certainly see why it happens. You just can't help smiling when they rise out of the water and swoop under the boat.
They're usually found in groups of 2-8 individuals and occasionally, several groups come together to form a large, temporary pod of about 50 dolphins. Black Cat's Lyttelton Cruise is limited to dolphin spotting but over in Akaroa they run Swimming with Dolphins cruise that puts you right in the water with them - the only place on the planet where you can swim with Hector's Dolphins. Only ten swimmers are allowed in the water at any one time and for every customer who views, or swims with dolphins, Black Cat sets aside a portion of the ticket price for research and the study of the dolphins. The also provide the Department of Conservation with daily data on the dolphins' movements and behaviour. You can find out more about that at www.adopt-a-dolphin.com 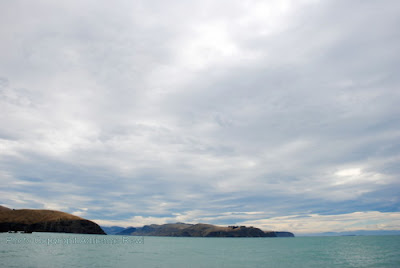 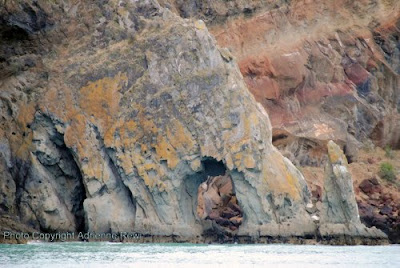 I always think it's a real shame that locals overlook great activities like this, thinking them the preserve of tourists. Unless you're a boatie, you're unlikely to ever get the chance to to experience the diversity that Lyttelton Harbour offers. Lyttelton Harbour is just one of 37 bays or inlets around Banks Peninsula and it has a rich birdlife - you get up close to spotted shag rookeries and their fascinating guano deposits (image above) - and a wealth of fascinating historical and geological points of interest from World War II gun emplacements to old quarantine stations (on Ripapa Island and at Camp Bay), historic whaling settlements - even an old prisoner of war camp on Ripapa Island, when it 1918, our most famous prisoner of war, Count Von Luckner was in residence. All up, it's two hours very well spent and there's nothing like that freeing feeling of being out on the water with the sun beating down and the wind in your hair.
www.blackcat.co.nz
Posted by Adrienne Rewi at 12:08 PM