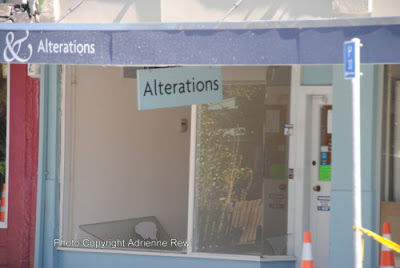 I decided to go for another bike ride around a few of the suburban streets of Christchurch's much-altered east side yesterday. I live on the east side. It's not as flash as the west side. The property values are lower and you don't see a lot of BMWs or Mercedes over this side of town. It's easily overlooked. But I like it. It has a gritty character and the people are real.
It was not an ordinary bike ride. For a start I was wearing a mask and dark glasses - along with the obligatory helmet and gloves - all of which combined to make me feel like a special kind of idiot. But I was completely unrecognisable (that I didn't mind) and I was protected against the dreadful clouds of pale grey liquefaction dust that now swirl around the streets. As it turned out, the dust was the least of my worries. I came off my bike twice (delighted again, to be unrecognisable) - once when my front wheel came to a sudden stop in a pile of wet liquefaction and again when I was gazing at houses and didn't see a large hole in the road ahead.
Everything is altered in Christchurch after six months of continuing earthquakes. Everyone knows that now and I thought this broken suburban shop (above) a touching metaphor for that. With its roof askew, its sign on a tilt and its front glass panes broken and fallen in, it seemed a pale shadow of its former self - like so much of this shattered city. 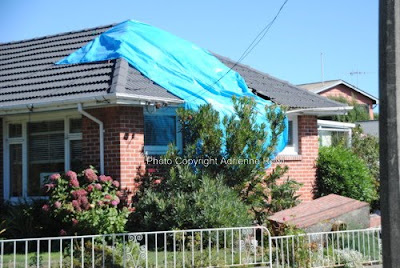 After the 7.1 quake in September 2010, the Avonside area was particularly beaten about. Now, after the 6.3 quake on February 22, it's one of the most severely hit areas again. The selection of photos here were all taken in Richmond-Shirley and Avonside and you don't have to go far in any direction to come upon houses both damaged and derelict. 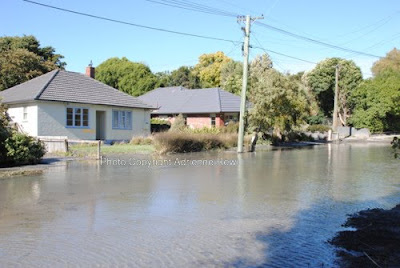 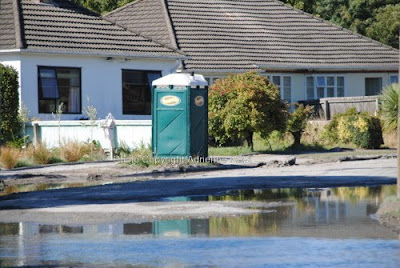 I felt for the homeowners in this street - still flooded 10 days after last Tuesday's quake. This is the sort of thing I came home to when I arrived back in Christchurch on the afternoon of Wednesday, Feb 23. I remember the despair of turning the corner and seeing a sea of grey, slimy water settled over the entire street, my driveway impassable, people standing about looking dumbfounded and disbelieving - and that was a day after the earthquake. I shuddered - and still shudder - as I imagine what they must have felt during those hideous seconds of immediate terror. I hadn't felt a thing. I had been in a remote valley on Four Peaks Station, near Fairlie, huddled beside a fire in New Zealand's oldest musterer's hut - The Sutherland Hut (1866).
I cut the rest of my trip short when I heard about the earthquake. People couldn't understand why I was suddenly desperate to get back to Christchurch; and as I passed a steady stream of cars heading south from Christchurch on the Wednesday morning, I felt physically sick and in fear of what I might find at home. My home in fact - the everlasting renovation project - once again defied the odds and stood firm - a few more perky little cracks to the plaster walls and foundations but a roof over my head at least. Unlike so many others on this side of town.
Whole streets in Avonside seem deserted. Abandoned. Eerily quiet. 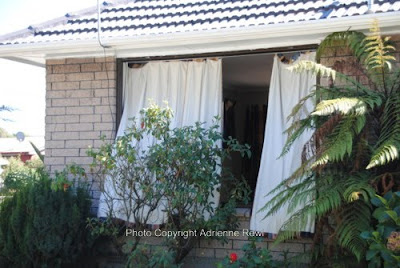 Glass has been blown out of windows.
Curtains hang lifelessly into the garden.
Roofs are bandaged with plastic and tarpaulins.
Fences and walls are toppled.
Chimneys have cavorted down rooflines and fallen into lawns.
Garages are twisted.
Decks are askew. 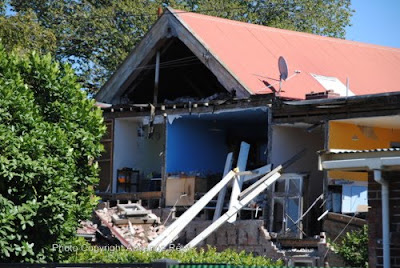 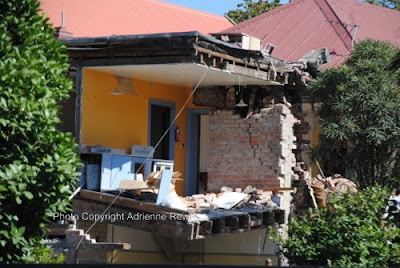 Houses - like this old beauty in Linwood -that withstood the force of September's 7.1 quake, have been torn assunder by the 6.3 - beds, kitchens, furnishings, colour choices laid bare for all the world to see (and probably judge). 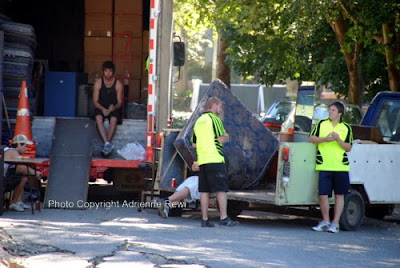 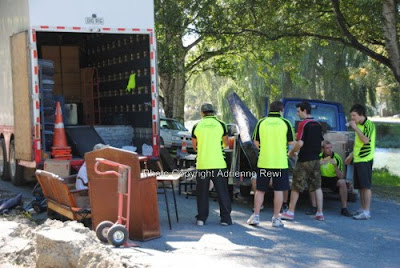 A fresh batch of people are moving out - either because they've simply had enough, or because their homes have been declared unsafe to reside in. I haven't had to grapple with that. Not yet at least.
Too many more earthquakes and my old ruin may also give up; but in the meantime it's a 'safe haven' against uncertainty. It's a place I can come back to after these bike rides - where I can close the door and try and pretend life is normal. It's a place - an untidy place - that stores twenty-one years of my life in Christchurch... the physical shards of memory that I have stacked in cabinets and corners. It's the tatty place where I can switch on the computer and lose myself in writing, hoping the walls will stay firm long enough for me to meet the current pending travel guide deadline of July 15 - a 550 page guide I have yet to even start.
It's not easy to focus on writing when aftershocks rattle and rumble through the city.
That's why I'm already 2 weeks behind schedule.
And I panic when I see the precarious state of my office window, which now sits 3cm out from the windowsill - pushed casually awry by the force of too many earthquakes.
I hope it holds while I write about New Zealand's luxury lodges and glamorous hotel suites.
Like all of Christchurch's earthquake survivors, I tell myself how lucky I am to be alive.
I felt that before any of these bastard earthquakes hit; but now I feel it with a new intensity. I tell myself I shouldn't be moaning about having to spend five days digging out smelly liquefaction, or about a rotten window that has been unceremoniously hurried toward the end of its life and how I am going to get it fixed before winter when there is a shortage of builders in Christchurch; or about the multitude of cracks that have opened up in the fabric of this weird little place I call home. I tell myself these are minor things and that I must stop prattling on about it when people have lost family members in crushed city buildings.
But the strange truth of ongoing earthquakes is their ability to render us all victims.
We are all suffering in different ways and we shouldn't feel guilty about the small pains and worries. Any assault on our sense of normality, our inherent need for comfort, continuity, calm, control and connectedness is a legitimate cause for concern.
Posted by Adrienne Rewi at 2:40 AM