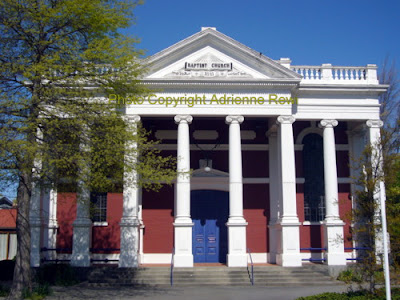 This is how the used to look, before the September 2010 earthquake. It was always a dominate architectural statement on the corner of
Madras Street and Oxford Terrace, it’s large, classical columns adding heft to its non-conformist style. Built in 1881, it was modelled after Charles Sturgeon’s 1800s Metropolitan Baptist Tabernacle in London and according to the church’s present-day minister, Chris Chamberlain, it was a statement of independence and difference in the largely Victorian Gothic city of the day. 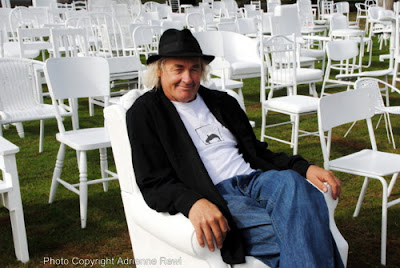 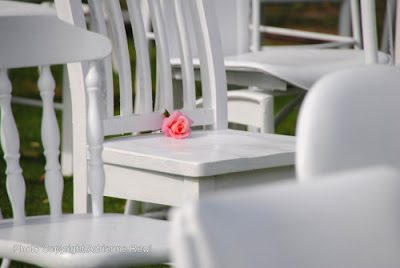 On February 22 – the anniversary of the 2011 6.3 earthquake that devastated much of inner city Christchurch – I visited the Baptist church site to see 185 Empty Chairs, an exquisite memorial installation conceptualised and put together by Christchurch painter, paperhanger, artist, Pete Majendie. As Pete points out, the idea of using the empty chair as a metaphor for loss or absence is not new in art.  When artist (Samuel) Luke Fildes (1844-1927) learned of the death of Charles Dickens, for whom he was illustrating a book, he drew “The Empty Chair, Gad’s Hill – Ninth of June 1870”, showing Dickens’ empty chair and desk. 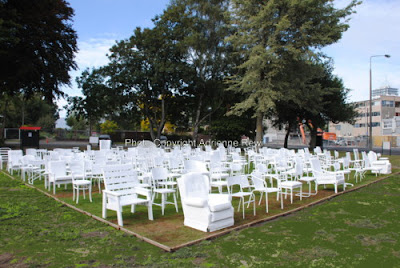 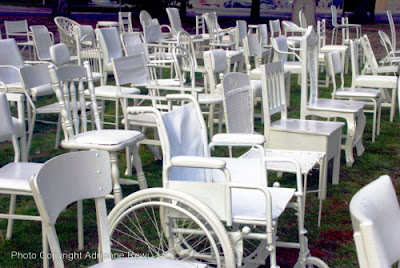 The empty chair was an inspiration to Vincent Van Gogh; and it’s been used more recently in the Bryant Park memorial when the lawn was lined with 2,753 empty chairs facing south toward the fallen ahead of the 10th anniversary of the September 11 terrorist attacks. Similarly, victims of the bombing are remembered in a memorial comprising bronze and glass chairs; and in , a memorial to Jews takes the form of empty chairs. Here, on the site of the fallen Oxford Terrace Baptist Church, 185 chairs of all shapes and sizes – all painted white – symbolise those who lost their lives in the February 22 Christchurch earthquake. The individuality of each chair pays tribute to the uniqueness of each person represented. 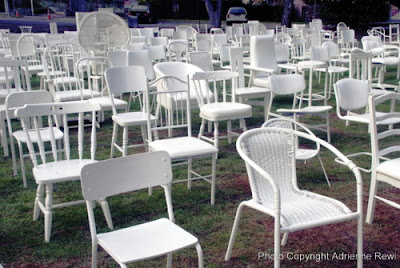 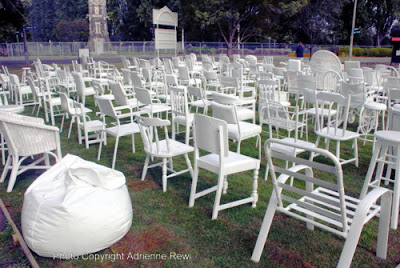 Pete Majendie acquired the chairs from different sources. He purchased 120 of them off Trade Me. Local furniture retailer, Hunter Lounge Suites, donated nine brand new chairs (including an Italian leather chair). Cave Creek survivor, Steve Hannah donated his wheelchair. Two chairs were donated by the families of earthquake victims and Pete found that when he went purchasing chairs, some donated them when they learned what the chairs were for. 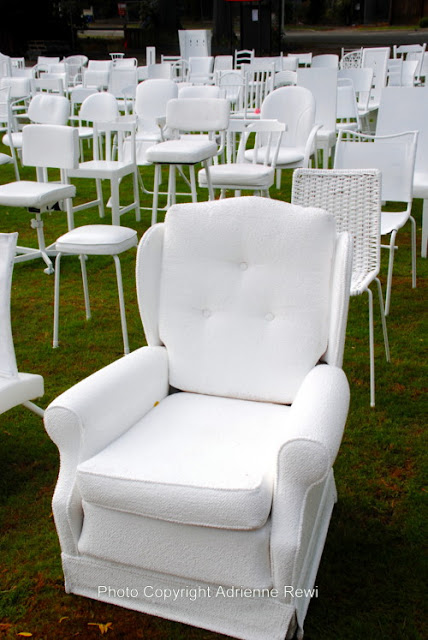 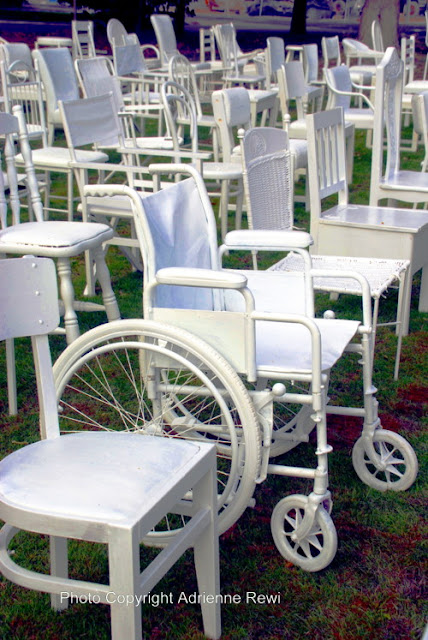 Four or five volunteers helped Pete lay out the 185 square metres of artificial grass and around 20 volunteers met every Monday for three weeks to help paint all the chairs white. He says the most he paid for any one chair was $20. The installation will remain in place on the site for a week and Pete and Chris Chamberlain say it’s been a pleasure to watch people come and interact with the installation – to sit awhile in peace and silence and remember friends and family and the horror of that fateful day a year ago. 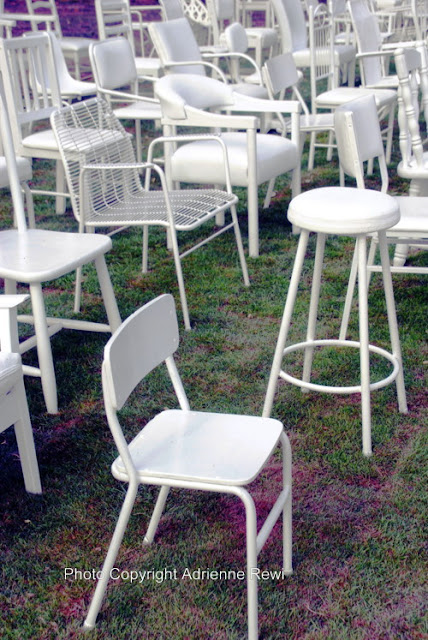 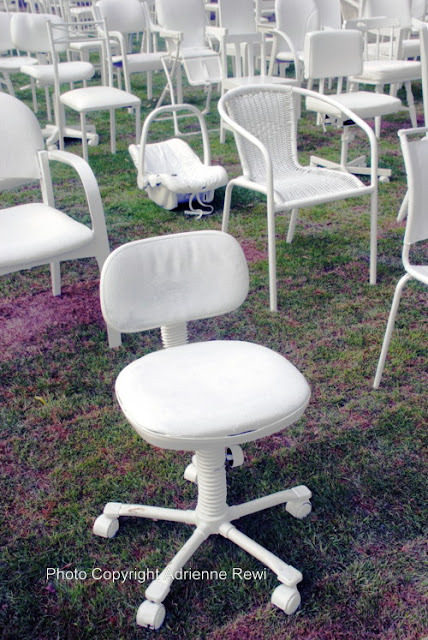 The original church was formed by nineteen English Baptists in 1863 – thirteen years after the founding of .  The first minister was Decimus Dolamore, who was one of the pioneers of Baptist work in .  The congregation initially met in the Town Hall in High Street, then built a church on land it had purchased in Lichfield Street
(1864), now marked by a plaque on a building opposite the Bus Exchange.  After an unfortunate division within the membership (1867), the people reunited in 1870 and worshipped in a church in

Hereford Street, which was moved to the present site in Oxford Terrace in 1879.  The church has had a long association with the life of the city, has been involved in setting up new congregations in , and was a founding member of the Baptist Union of New Zealand and the New Zealand Baptist Missionary Society (now called TRANZSEND). 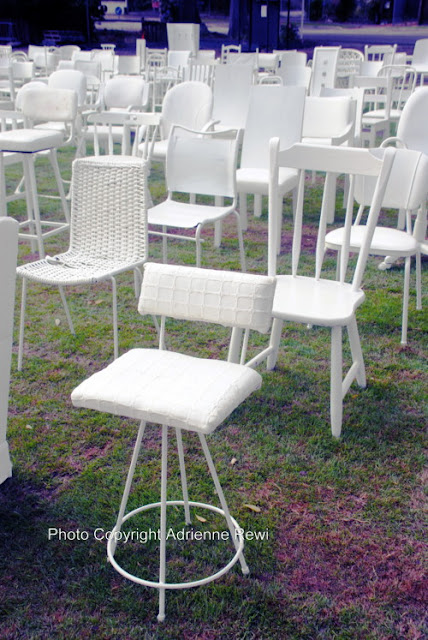 The pictured church sanctuary was built in 1881. Its classical design was notable in a city dominated by Gothic architecture. It was listed as a Category 1 building under the New Zealand Historical Places Register. The refurbishment of the interior of the church in the late 1980s provided a light, open space. The pipe organ, imported from England, was installed in 1915 and continued to play a part in the 10.30am Sunday worship of the church until the building was red stickered following the earthquake in September 2010. Chris Chamberlain says the land on the current site has yet to be tested – “we have to do our homework” – but he sees a rebuild as “a chance in 100 years, a huge opportunity."
Posted by Adrienne Rewi at 11:26 AM

Thank you for the writeup of this memorial. FYI, Sam Lucas also survived Cave Creek.