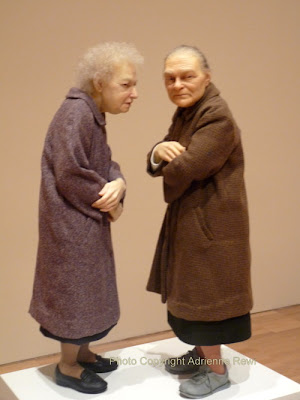 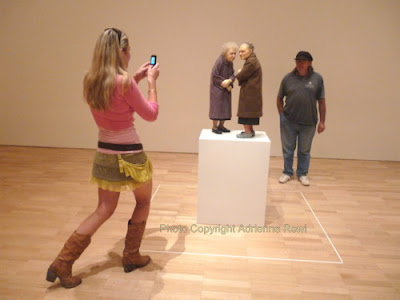 Above: Two Women 2005.
Photographed at the National Gallery of Victoria, Melbourne.
February 2010.
When Kelly Gellatly wrote of Ron Mueck's Two Women 2005 in the Ron Mueck catalogue, she spoke of the artist's ability to undercut the stereotypes into which old women normally fall - "the warm, loving, cuddly grandmother-type...wise, generous, jolly....or the wizened old crone of fairytale fame." And in Mueck's major touring exhibition, now showing at Christchurch Art Gallery, I am reminded again of Gellatly's words and her observation that "part of the shock of seeing Mueck's women," is the fact that they would be so ordinary, so indistinguishable and unremarkable in a crowd. 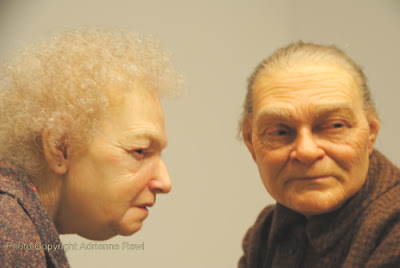 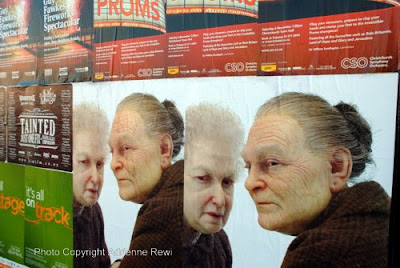 Above: Two Women 2005 Photographed at Christchurch Art Gallery, Nov.2010
Christchurch Posters "From their ashen faces, thinning hair and osteoporosis-ridden backs, through to their slip-on shoes and bunched, wrinkled tights collected at their ankles," she writes, "there is a conspiratorial, gossipy and decidedly critical air to their encounter....." There's a distinct feeling they're watching you, talking about you, sniggering perhaps, or tut-tutting as they consider the modern world passing them by - both within the gallery and outside on the street, as they peer at you from posters scattered throughout the city. 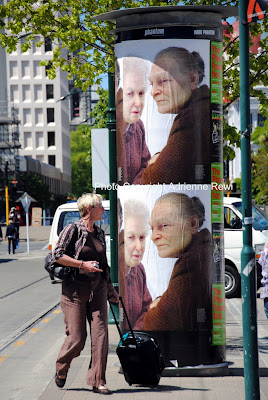 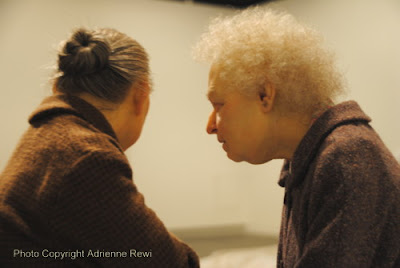 Mueck's show first opened in Melbourne at the National Gallery of Victoria on February 21, 2010 and then went to Queensland Art Gallery in Brisbane before coming to Christchurch. When I was visiting the Melbourne show in February, I interviewed NGV's Curator of Australian Art Exhibitions, David Hurlston, who spoke of Mueck's work, the artist's reclusive nature and his own visit to Mueck's North London studio. He spoke of the compelling nature of Mueck's giant sculptures - their 'WOW factor', and their links back to Rennaissance, Medieval and Greek portrayals of the human form. He talked about Mueck's studio and the artist's traditional approach to working and his sketching and absorbing of a wide range of influences. "He draws influences from the people around him, from people in the street, a moment he sees, a smile, the stance of a woman looking in a window - they're etched in his mind and he takes those back to his studio where he begins with sketches and a clay marquette," says Hurlston. "He has an incredible gift of being able to give life to those observations." 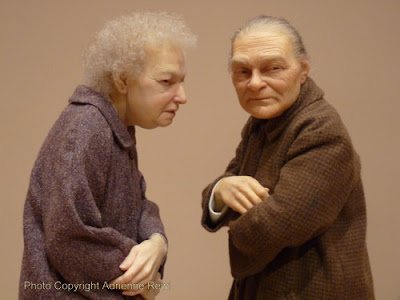 Mueck's North London studio is located in a beautiful old stable building at the end of a lane - "a very romantic, storybook artist studio," says Hurlston. It is a mass of 'body parts,' scaffolding, boxes filled with eyeballs and mannequins - "a head here, an arm there; a level of disarray but also an incredible orderliness. He knows where everything is. You look at the finished pieces and there is a quality about them that alludes to a clean environment; but it's not, it's messy, dirty and over 100-years-old."
Mueck has been quoted as saying "I am a misanthrope." Hurlston describes him as "shy, an enigma, someone who often chooses to be alone." He doesn't like talking about his work either and normally shuns all media interviews. He's very self-effacing. "We had a journalist interview organised to promote the Melbourne show but Mueck vanished ten minutes before it was due to take place. That was no surprise to me," says Hurlston. 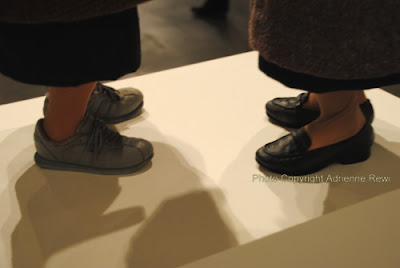 Ten years ago Mueck was virtually unknown as an artist and his meteoric rise to international fame has given rise to critics as well as fans. "There are some in the art world who say he hasn't done the hard yards, that he has no art school training, that his work is gimmicky. He's gone from an unknown to the top of the heap in a very short time. His work is attention-grabbing but he's very honest and having seen him at work, having seen his artistic sensibility at play and heard him talk about his observations and his work, I don't think that's true. The proof of how his work touches and attracts people is in the exhibition numbers - over 50,000 in Melbourne in the first 36 days of the show and on average around 1,200 people a day. He sees himself as an outsider in the contemporary art world and he doesn't aspire to sensationalist antics. I believe he's ultimately going to be judged as one of the really important artists of our day," says Hurlston.
www.christchurchartgallery.org.nz www.ngv.vic.govt.au www.qag.qld.gov.au
Ron Mueck continues at Christchurch Art Gallery until January 23, 2011
Posted by Adrienne Rewi at 6:19 AM