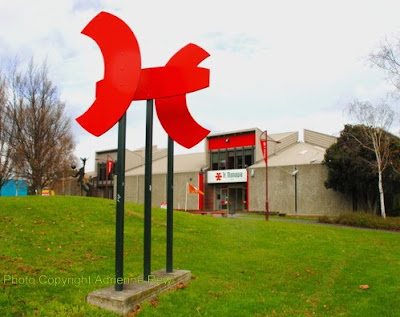 I lived in and near Palmerston North in the Central North Island's Manawatu region in the late seventies but after I moved to the South Island in 1990, I've only ever been back there once. So when I rolled into town this year - in July - I was amazed by two very unexpected things - how much nostalgia I felt and that I actually got lost in now unfamiliar streets. I did however find what was the Manawatu Art Gallery in my day - now Te Manawa - Museum Gallery & Science Centre, which is currently undergoing a massive extension programme due for completion in late 2011. This is where I began a wander that tracked some of the city's public sculptures......the above unnamed, outside Te Manawa. 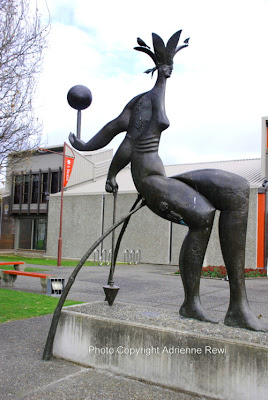 Also outside Te Manawa, this - "Pacific Monarch" by Paul Dibble and commissioned by the Manawatu Art Gallery in 1992. 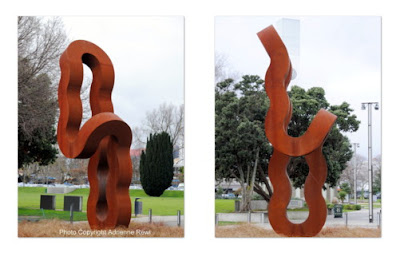 Further down the street, in the middle of a traffic island near the Palmerston North City Council building, I found this work - my favourite of the bunch - "The Returning Column" by South Australian sculptor, Greg Johns. Made of corten steel, the 5-metre high work, the work was acquired by the Palmerston North Public Sculpture Trust. 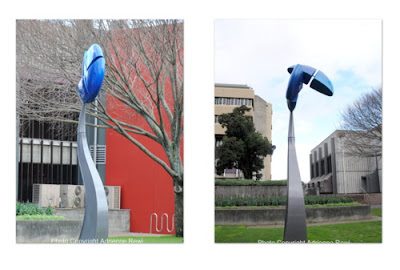 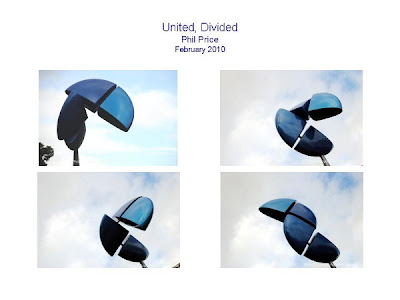 "United-Divided" by Christchurch sculptor, Phil Price is in the same vicinity and is the fourth work installed by the Palmerston North Sculpture Trust. It sits outside the Palmerston North Convention Centre and was unveiled in February 2010. Like its eerily similar Christchurch counterpart (in orange), the kinetic work rolls, dips, 'breaks apart' and rotates, "coming together and then dividing in a continuous, seemingly random, wind-driven performance." There's also a terrific work - "Numbers" by Anton Parsons and a beautiful wall work by Guy Ngan, neither of which I had time to photograph. All of the above, in addition to the striking collection of Maori sculptures in The Square, near the council buildings, are a very pleasing addition to the cityscape. While I found the remodelled square itself slightly 'communist' in feel, I always love it when a city installs contemporary public art for us all to muse over. It seems no two people can ever agree on their appropriateness, their beauty or their worth but that's half the fun of it. Good art should touch a few 'raw nerves.'
Posted by Adrienne Rewi at 2:47 AM

Wonderful article and pictures. Great to see the 'rusty sculpture' (Returning Column) was your fave - its mine to but seems to be the one others love to hate. Apparently it will rust away at 1mm per 1000 years or IIRC. Keep your eyes out for a virtual tour of which may be appearing at some stage.

Thanks Warrick.
I also loved the Anton Parsons but ran out of time to photograph it. Great to see so many sculptures appearing in 'good old Palmy.' :-)
Will be doing a blog on the maori works over on my other blog soon - http://maorilifestyles.blogspot.com Adrienne