An Apple a Day - For Art 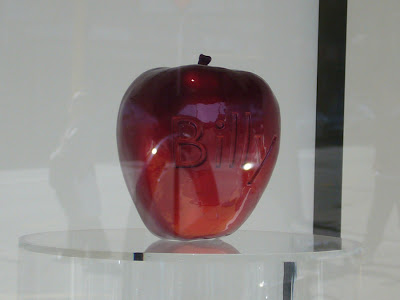 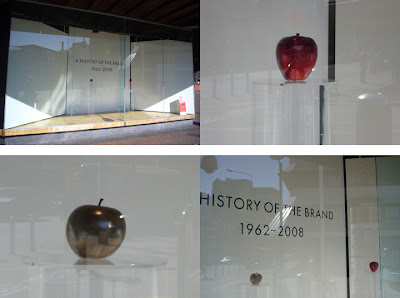 "A History of the Brand: 1962-2008" Billy Apple. Ballantynes Window Christchurch. Sept. 2008. Ajr
Auckland-based Billy Apple has taken over the front window of Christchurch retail store Ballantynes as part of Scape 2008 and his exhibit is as minimal and as slick as we’ve come to expect of an artist who consistently blurs the lines between art and commercialism/consumerism/capitalism. His two apple sculptures – dots from a distance – are gorgeous on close inspection. The bronze apple was cast in London in 1962 and featured in the first solo show the artist (previously Barrie Bates) staged to launch himself as Billy Apple. The juicy red apple bearing his name (top image) is cast in polyester and replicates the new variety of (real) apples that the artist has been developing since 1999 with HortResearch, pip-fruit breeder Allan White and Saatchi & Saatchi. As a fruit-lover - a fruitaholic in fact - I’d say that’s the ultimate road to immortality and edible art. For other Scape 2008 entries click on Scape in the below label line.
Posted by Adrienne Rewi at 7:01 AM

Its great to see Billy Apple's work appear more and more in the blogosphere and social networks! About time as I think Apple's is one of the few outstanding oeuvres from New Zealand.