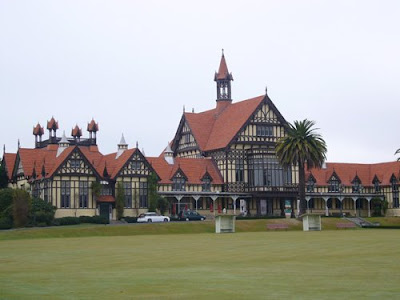 Rotorua Museum & Art Gallery. April 2007. Ajr
There can’t be many museums and art galleries around the world that are housed in a former geothermal bath house. I suspect the Rotorua Museum and Art Gallery is the only one. This magnificent example of Elizabethan style architecture – an extravaganza of towers, gables, grand staircases and beautiful timber work – was opened in 1908 and became famous around the world as a place to soothe away your troubles in baths ‘laced’ with electric currents! Now an architectural icon with a NZ Historic Places Trust Category I listing, the building is given over to the Rotorua Museum, which took over the South Wing of the Bath House in 1969; and the Rotorua Art Gallery, which moved in to the North Wing in 1977. The two merged as one entity in 1988. The slightly macabre bath house area– a place that gives a whole new meaning to dropping your hair dryer into the bath water - has been restored as a fascinating museum exhibit. www.rotoruamuseum.co.nz
Posted by Adrienne Rewi at 8:00 AM