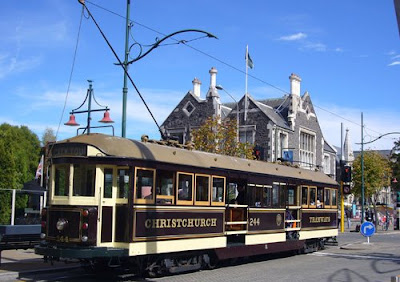 Worcester Boulevard, Christchurch. 2008. Ajr.
This is one of the Christchurch trams - the tram you have when you’re not really having a tram. This could in fact, be one of the shortest tram rides in the world – just 2.5km and all of 25 minutes around about four city blocks with 11 stops along the way. Sometimes it seems like a bit of a joke and I often wonder what the tourists think as they’re rolling along the rails. However, they are at least passing by some of the city’s best historic architecture and that can’t be a bad thing. Back in the old days -1905-1954 – electric trams were a feature of the inner city Christchurch transport system. They were brought back as a tourist attraction in 1995 and now there are five restored trams and two trailers. One of them, a 1926 restored Melbourne tram, serves as the Tramway Restaurant, which takes 36 diners on a five-circuit spin of the tram tracks while they tuck in to a 4-course dinner. I wonder what happens if you haven’t finished your meal by the time the tram rattles to a stop. www.tram.co.nz

Posted by Adrienne Rewi at 7:55 AM