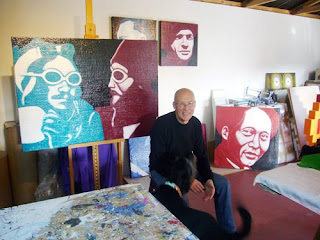 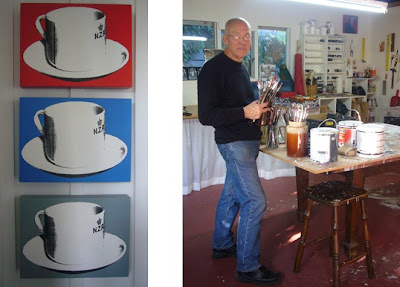 Christchurch painter, Rudolf Boelee considers himself “a history painter” – someone interested in social conscience and a strong sense of the past. I visited his studio yesterday and my eyes were darting from the second I arrived to the second I left because, fortunately for me, Rudolf is also an avid collector. Currently exhibiting “Exiles” at the Southland Museum and Art Gallery, Invercargill (until June 22) and in “Made in New Zealand” at Devonport’s Flagstaff Gallery in Auckland (until May 21), Rudolf is now working on “Heroes,” a series that considers who is and what makes a hero. Well known New Zealand names from history - Charles Upham, Sir Edmund Hillary, Jean Batten, Robin Hyde, Tenzing Norgay, Sir Bernard Freyberg - are all featured.
Interestingly, Dutch-born Rudolf is the owner of the famous New Zealand pottery name, Crown Lynn and since 1997 many of his paintings have featured iconic Crown Lynn pieces like the white swans, vases and New Zealand Rail cups. His passion for Crown Lynn is ongoing and he also collects the actual pottery – along with assorted German ceramics. A visit to the home he shares with his wife, fabric artist, Robyne Voyce, is like stepping into a colourful paint box. www.opshop.co.nz

Posted by Adrienne Rewi at 3:34 PM