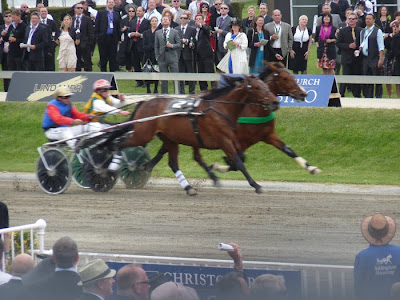 Yesterday's New Zealand Trotting Cup Meeting at Addington Raceway was a first for me and I have to confess I was MUCH more interested in the crowds than I was in the horses. I never went near a betting slip, I hardly saw a race; but I am pleased with this shot from the first race - horses flying through the air, all hooves off the ground. 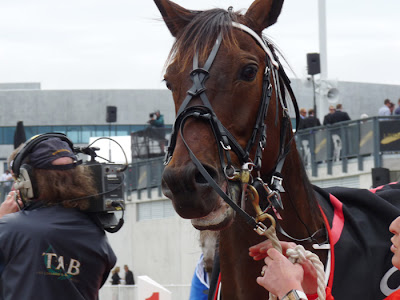 And this shot of one of the earlier winners, with the television cameraman studiously photographing something entirely different. (A man after my own heart I think) 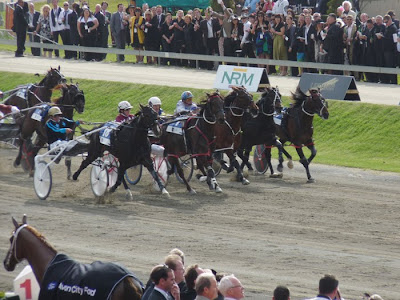 And then the main race - the NZ$1-million New Zealand Cup Race, which was ultimately won by the favourite, North Canterbury-trained Monkey King - that's him nearest left...his rider, Methven's Ricky May with the bright blue striped sleeve....charging down the final straight. I know virtually nothing about horse racing but I have to say, there's quite an adrenalin buzz when the crowds start screaming and cheering and jumping up and down. I really needed another set of hands to photograph the crowd, especially during the final race. In winning the race, Monkey King set the second-fastest winning time in cup history - no wonder I couldn't keep up with him! And no offence to the horses and their owners, trainers, riders but I still think the crowds are more interesting. With strict drinking rules in place for this year's meeting, the mood was a little less'exuberant' and drunken that I had anticipated but nonetheless, dress people up, gather them in huge numbers and give them alcohol and you're guaranteed a priceless show of human behaviour. That's what I was there for and I wasn't disappointed. www.addington.co.nz www.nzcupandshow.co.nz
Posted by Adrienne Rewi at 11:05 AM