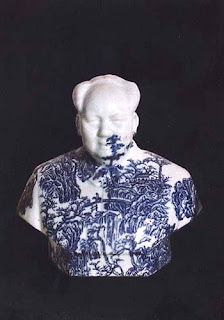 Shenling, Redgate Gallery, Beijing, 2003
I have just visited a Christchurch home where the owner has a passion for blue and white china from around the world. It brought to mind a rather stunning ceramic sculpture I saw in the Redgate Gallery in Beijing in 2003 - a statue of Mao embellished with the traditional blue and white patterns of Ming Dynasty China.
Chinese contemporary art is some of the most exciting in the world. Chinese performance art particularly is pushing boundaries - and has been for a number of years. Shanghai's ‘Fuck Off Show’ for instance, which presented images of decapitated bodies and dead stillborn human babies. Not surprisingly the Ministry of Culture put out a circular after that stating that such shows could no longer be held in public places. That put a dampener on things and according to Brian Wallace of Redgate Gallery, the performance art scene has never returned to that ‘high point.’
When I visited Beijing in 2001, I was lucky enough to be able to interview leading Beijing artist, Sheng Qi, one of the early forces in Chinese performance art in the 1980s and co-founder of the performance group Concept 21. It took me some time to notice that he was missing his smallest finger on his left hand. That was because he had chopped it off with a cleaver after the Tiananmen Square Incident on June 4, 1989.
Liberal thought in China suffered seriously from the social and political changes after Tiananmen Square and Shenq Qi, “in an act of despair and agony, cut off the small finger of his left hand and buried it in a flowerpot before leaving Beijing for Rome.” He stayed in Europe for eight years and his mutilated hand later figured in many of his photographic works.
He returned to Beijing in 1999 and in his first performance he wore the upper part of a military uniform with a small red AIDS ribbon attached to the jacket, while his head was covered with red cloth. The lower part of his body was naked, with his genitals wrapped in gauze and tethered to a parrot. And I’m not saying anything more about the fact that he went on to create performance works that involved small transparent balls, closed eyes, toy soldiers, his hand down his own underpants and urinating, naked, on decapitated chickens. But I am prompted to ask – and I don’t why I never did when I had the chance – if he ever unearthed his little finger from the flowerpot; and if he did, what he subsequently did with it?
All that is nothing compared to Zhang Huan, who dabbed his penis in black ink and slapped it between the pages of Encyclopaedia Britannica for a time. (He’s fortunate my mother never found that out. She always put great store in Encyclopaedia Britannica and she would have been scandalised by his actions. I’m sure she would have hunted him down and put his penis under a large pile of bricks until he had come to his senses).
In a rather more attention-grabbing moment, Zhang also chained himself to the roof beams of a barn in eastern Beijing and let blood drip from a tube bored into his neck, down onto roasting trays below where, much to the concern of the audience, it bubbled and evaporated with rather a nasty stench. Then there was Wu Gaozhong, who curled up inside the freshly-slaughtered buffalo carcass; others with live chickens in their mouths; others getting branded; others buried to their neck in stones; and my favourite: the quirky fellow who dragged a cabbage through the streets on a chain. Naturally this work was called Pet No.2.
Posted by Adrienne Rewi at 2:43 PM