Where Street Art is Celebrated 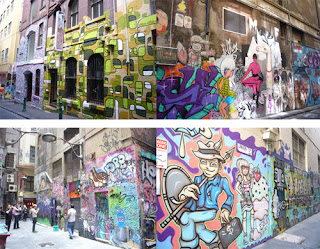 Hosier Lane (off Flinders Lane), Melbourne. 2007.
Some of the most interesting parts of Melbourne are found in its old back lanes, many of which are now home to designer stores, restaurants and cafes. Hosier Lane was once the 'capital' of the rag trade and is now home to major fashion labels like Zambesi, which sits on the corner of Flinders & Hosier Lanes amid some of the best street art I've seen enmasse. Rather than being painted out by over-zealous city officials, it's part of a recognised tourist beat and attracts masses of photographers.
Posted by Adrienne Rewi at 12:54 PM