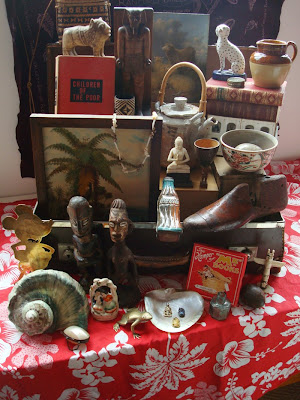 From the John Perry Collection. Image supplied by Christchurch Art Gallery
John Perry of Helensville, north of Auckland knows a thing or two about collecting. He was the director of the Rotorua Art Gallery and Rotorua Museum from 1978 to 1997 and he now runs Global Village Antiques and Collectables in Helensville’s old Art Deco picture theatre, The Regent – recently described in the NZ Herald as “a shop that thinks it’s a museum.” Now he’s coming to Christchurch - with a suitcase full of surprises – to present “The Business of Collection: Man-made and Natural Curiosities,” at Christchurch Art Gallery, on Wednesday, January 21st. It’s a talk that ties in perfectly with the gallery’s current exhibition Wunderbox, which brings together eccentric collections from some of New Zealand’s best known contemporary artists. (I wrote about it here in December 2008). John is reluctant to reveal what’s going to be in his suitcase but the audience can expect to see something unusual and extraordinary – including a little something from overseas that is 4,700 years old. He has a passion for collecting man-made and natural curiosities that reflect New Zealand’s cultural heritage – everything from stuffed birds, Kiwiana and mineral specimens to books and etchings. If it’s arresting and unusual, he’ll collect it; and he’s a firm believer that much of what we are currently throwing away – from junk mail to cell phones – will, 50 years from now, be considered highly collectable information by social historians and collectors. “That’s something to think about isn’t it,” says Adrienne, as she glances around her many chaotic piles of hoarded STUFF!
Posted by Adrienne Rewi at 2:00 PM