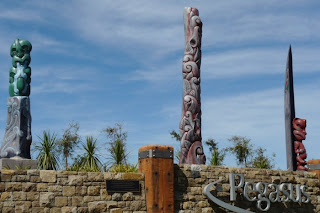 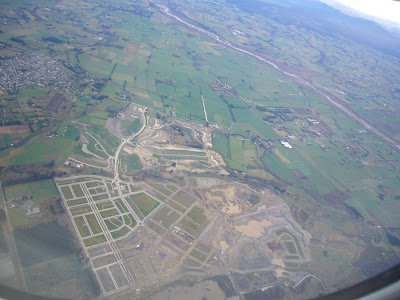 Pegasus, North Canterbury. 2008 & 2009 Ajr
When I flew out of Christchurch recently, I had a clear view of the new North Canterbury town of Pegasus, 25 kilometres north of Christchurch. Viewed from the air it seems little more than an excavation site and I think the first residents have only just moved into their new house. There is a long way to go for the rest of the town, which will include hotels, shopping complexes, golf course, lakes, a yacht club and homes for 7,000 residents. In the meantime, much has been going on at ground level. Because of the town’s proximity to the old Kaiapoi Maori pa, home of the Nga Tu-ahu-riri hapu (sub-tribe of Ngai Tahu), the town’s developers, Infinity Investment Group agreed to work with a team of archaeologists and tribal representatives to ensure that any artefacts unearthed are treated appropriately. A significant number of Maori artefacts have been unearthed, including greenstone adzes, the remnants of a waka (canoe) and an ancient pou (carved post), which is believed to have been part of the old pa’s palisade defences, which were breached by fire in the 1830s. The plan is to house these and other significant cultural items in a whare taonga (cultural centre) to be built at Pegasus. 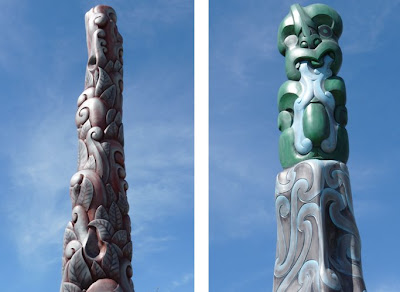 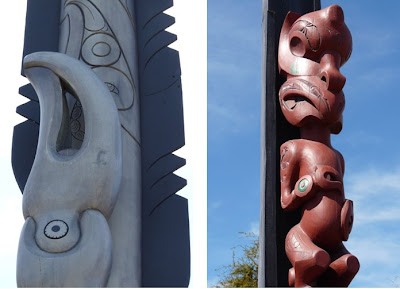 Pegasus, North Canterbury Jan 2009. Ajr
The rich historical significance of the Pegasus site has also been acknowledged in the placement of six new carved pou whenua, which make a bold statement at the entrance to the town. Carved by Fayne Robinson, Riki Manuel and Caine Tauwhare, who collectively have more than 75 years carving experience, the pou took eight months to complete. They’ve been carved from wind-felled totara logs from Okiwi Valley just north of Kaikoura and gifted by Te Runanga o Kaikoura on behalf of the people of Ngati Kuri. www.pegasustown.com If you are interested in Maori Culture please click on my other blog http://maorilifestyles.blogspot.com for much more.
Posted by Adrienne Rewi at 6:01 AM