Everyone talks about Australia being the “spiritual home of corrugated iron” and maybe it is. Certainly contemporary Australian architect, Glenn Murcutt has created a huge revival of interest in corrugated iron as a modern building material; but here in New Zealand corrugated iron is as much a part of the landscape as sheep and cattle. You can rarely drive more than a few kilometres in this country without coming upon corrugated iron buildings in some form.

I can’t imagine there is a single farm in New Zealand that doesn’t feature corrugated iron in some way. It’s used for fences, pigsties, dog kennels, henhouses, sheep pens, barns, implement sheds, water tanks even for makeshift walls of houses. It’s been used to building thousands of holiday baches, farm cottages, shearers’ quarters and mountain huts. I’ve found corrugated iron churches, wineries, libraries, information centres, bus stops, grandstands, warehouses, huts and hotels. And of course every second roof in New Zealand is made of corrugated iron - and I think most people will agree, there's nothing quite so comforting as the sound of rain on an iron roof. 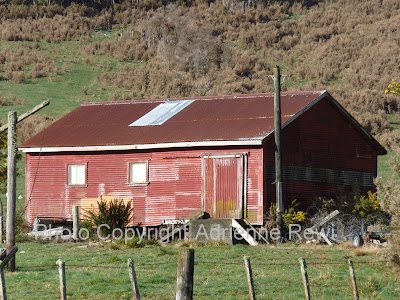 New Zealand architects have also been quick to jump on the Murcutt bandwagon (though never as successfully in my opinion). Don’t get me wrong, there are some very successful contemporary buildings in corrugated iron; I just get a little concerned about the trend for architects here to ‘follow like leemings.’ Heaven knows, I’m no architectural historian, so I have no idea who first entertained the idea of corrugated iron as a modern building for domestic and commercial architecture in New Zealand; but I do know that once the first architect tried it, hundreds of others copied the idea.

As a result we now have a proliferation of city dwellings (domestic and commercial alike) that pay weak and very forgettable homage to corrugated iron. In many cases in fact, I suspect it is not at all about paying homage to corrugated iron as a unique historic building material but rather an attempt to keep building costs down. I’ll bring you photographs of some contemporary corrugated iron buildings in New Zealand another time – for now, the continuing rural perspective.