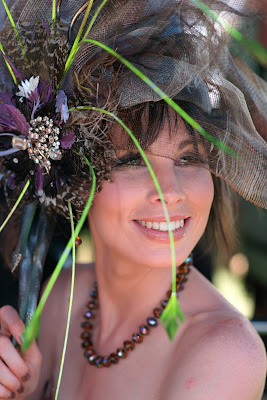 I went through a stage of wearing hats back in the eighties – not for any particular reason…just because I liked them. I wouldn’t dream of donning a hat now – not for anything! (Except maybe a sun hat). Can’t explain that; just gone right off them. So, I think you can safely assume that I will be the only woman at NZ Cup and Show Week without a hat! And all the happier for it – especially when I look at some of the ridiculous get-ups that pop up around the race course. Those hideous things called ‘fascinators’ for instance! Whoever invented those – along with the person who called them fascinators – should be taken out into the centre of the race track and shot. 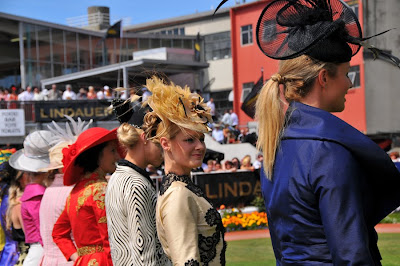 Fashion on the Field. Addington Raceway 2008 I often wonder where this tradition of wearing hats to horse race meetings originated. Suffice to say it goes way back. Maybe the British royal family are to blame? It’s interesting that, wherever there are horse meetings, there are hats, in any part of the world. I was intrigued to find last year that the tradition is even alive and well in the middle of the dusty Australian Outback. Who would have thought? All that said, I am looking forward to studying the hats at this year’s race meetings. A GOOD hat can be a ‘many-splendoured-thing’ (on the right person) (see above for instance) and I sense of world of excellent photographs opening up before me come race day. I am sincerely hoping though, that hat fashions have moved on from the silly fascinator phase. www.nzcupandshow.co.nz
Posted by Adrienne Rewi at 5:01 AM