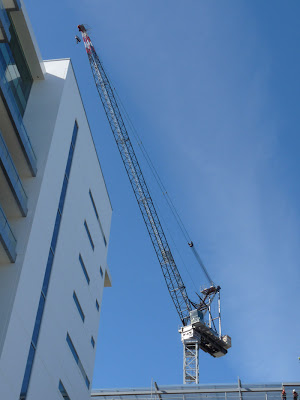 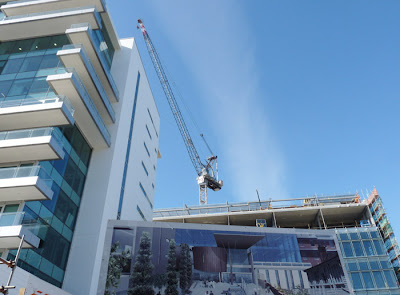 Christchurch. October 2009. Ajr
When most of my female friends wander around the city, they focus on handbags and shoes and fashion boutiques. For some very odd reason, I prefer to wander with my camera, focussing on very unfeminine things - like cranes and classic cars and construction sites. Sometimes I wonder if I suffered a bang on the head as a child - or have my feminine genes been beaten into submission or something? Don't get me wrong - I still like the pretty stuff too but no handbag on earth could make me feel as pleased and thrilled as this crane photo did today. Is that cause for me to worry? For a long time I thought I might be the only person on earth who loved photographing cranes - until I came upon a young English guy one day, photographing the very same crane as me. I had to ask and yes, it turned out he was as fixated as I tend to be. But you'd expect that of a bloke I guess. Oh well...I never claimed to be a conformist and as one male friend likes to quip, I am a cheap date (though it should be noted that he's never had to pay my shoe bill and had he been with me when I went out for coffee last week and came home with $500 worth of new shoes, he may have reconsidered). PS. The recently completed building on the left is the South Island's first Green office block; and the building under construction behind it is the new Christchurch City Council chambers - in what was the old Ngai Tahu-owned Chief Post Office building. Suffice to say it's getting an extensive makeover.
Posted by Adrienne Rewi at 4:22 PM