Showtime 8 - All the Fun of the Fair 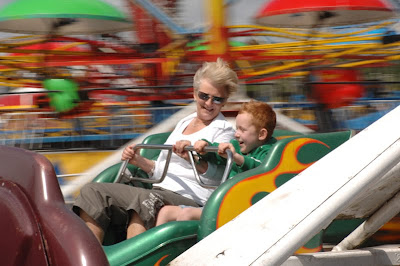 Image Courtesy CCC&NZCup&Show Week
Love the swirls of colour and movement in this image from last year's Royal New Zealand Show. It says so much about the pace, the colour, the extravagance, the fun of New Zealand Cup and Show Week, which is now New Zealand's largest festival of racing, fashion, agriculture and entertainment, all crammed into one hectic week from November 7 -14. It's a week that's filled with parties and socialising and a city filled with hats and high heels. I loved watching all that last year when I was in Melbourne in time for the Melbourne Cup. As trams, cabs and trains pulled to a halt all over the city, passengers spilled out in their finery - giggling groups of young women excited yet still a little self-conscious about wearing hats; men in pinstriped suits; the fashionistas strutting their stuff. It's the same in Christchurch - although forget trams and trains spilling out hat-wearing race-goers. That ain't a happening thing here; but packed bars and restaurants are. And for the kids the Royal New Zealand Show turns on another whole world of entertainment - the animals, the rides, the fairground atmosphere. It's all happening - soon! www.nzcupandshow.co.nz www.theshow.co.nz
Posted by Adrienne Rewi at 5:01 AM