WORLD on a Corner 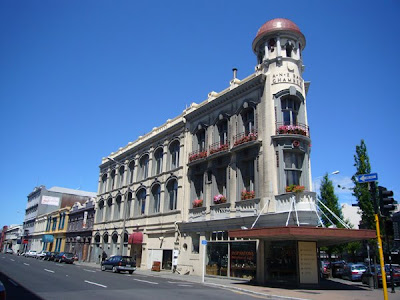 Leading New Zealand fashion house, WORLD has opened in Christchurch – some months ago now – in one of my favourite Christchurch buildings: this stunning corner edifice on the intersection of High, Manchester and Lichfield Streets. WORLD was established in Auckland in 1989 by Denise L’Estrange-Corbet and Francis Hooper, who have taken it from a brilliant idea to one of this country’s leading avante-garde fashion names.

I was wandering around the city with my camera last weekend and as I crossed over this intersection, I saw the morning light catching at the brilliant palette of colour hanging off the coathangers in the WORLD window. I had to stop and capture the moment. It’s a funky little store, bulging at the seams with original garments in the company of nostalgic curios – patterned china displayed on walls, taxidermy animals, old cameras and knick-knacks. I love it; some don’t. In its previous life, this corner location was home to a New Age crystal and Buddha shop that sold everything from incense and tiny figurines to crystals, Buddhas and all things god and goddess. Suffice to say WORLD has given the prime location (at one end of High Street, which is lined with fashion stores) a completely new look.

‘Back at WORLD’ it’s good to see that L’Estrange-Corbet and Hooper continue to defy expectations, combining crazy colours in garments with strong silhouettes. It’s fair to say that it’s been their irreverence, their talent and their fearless approach to taking fashion risks that have set them apart in New Zealand and brought them to the attention of leading international fashion writers and critics. They’ve appeared at London Fashion Week (1999) and they’ve taken part in major shows in Paris, Hong Kong, Singapore and Australia. Their garments are stocked even further afield in Russia, China, Beirut, Europe and the United States. You can read much more about WORLD and see their latest ranges at www.worldbrand.co.nz
Posted by Adrienne Rewi at 5:01 AM