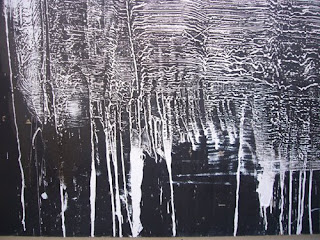 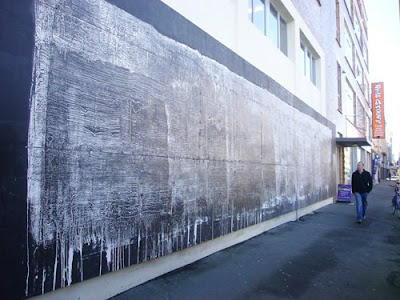 Tuam Street Christchurch. August 2008. Ajr
I’ve been driving past Stacey Turner’s painting on an unused Tuam Street billboard for weeks. Yesterday I finally stopped to photograph it. Installed as part of the High Street Project Offsite programme, it’s an adaptation of Turner’s previous works that have featured thick white brush strokes delicately outlined with black pen. Translating that laborious technique to billboard size was clearly going to take forever, so he got clever. There’s something quite mesmerising about the work. It looks almost woven, like a piece of frayed fabric; but what I loved best, was standing there photographing people as they walked past it – their reactions to it were mixed to say the least. And I DO regret not being quick enough with my camera to snap the guy who posed for me, jumping in the air in front of it. There’s a clown in every crowd.
Posted by Adrienne Rewi at 7:00 AM