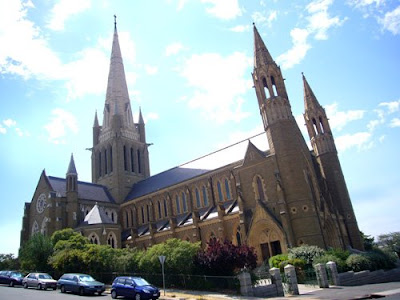 Bendigo. 2007. Ajr.
I’ve got a bit of a thing about photographing church architecture and this is one beauty I snapped in the provincial Australian city of Bendigo last year – a city rich in fabulous architecture, thanks largely to gold rush wealth. This is Sacred Heart Cathedral, one of Australia’s largest churches – and at 87 metres it’s second tallest in fact, after St Patrick’s Cathedral in Melbourne. It was also the last Gothic Revival style cathedral built anywhere in the world; and its construction was a drawn out affair too. Designed in 1895 by Melbourne architect William Tappin, work began in 1897. It ceased in 1901 due to a lack of funds and resumed again in the 1950s. It was finally completed in 1977. I might revisit it later this year to photograph the amazing interior columns.
Posted by Adrienne Rewi at 7:01 AM