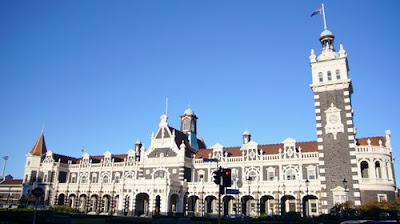 Dunedin Railway Station. 2007, 2008. Ajr.
It was pouring with rain when I was in Dunedin earlier the week so my photograph of the very splendid Dunedin Railway Station – snapped from a car window – was dull and gray. I have therefore added a second photograph taken on a sunny day last year. This marvellous Flemish Renaissance-style building was designed by George A Troup and built between 1904 and 1906. More than 750,000 Royal Doulton porcelain squares were used to tile the mosaic floor in the massive foyer. I think it is one of New Zealand’s finest historic buildings.
Posted by Adrienne Rewi at 7:00 AM