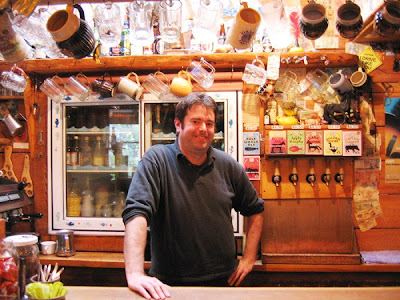 Neil Miller at Mussel Inn, Golden Bay, Nelson. Photo supplied.
Another in the Series Meet the People – Ordinary and Extraordinary New Zealanders Doing Interesting Things - When people ask acclaimed Wellington-based beer critic Neil Miller how he became a beer writer, he says he was simply an enthusiastic amateur lucky enough to turn professional. He says that while he had learnt how to research during six years at Parliament and how to speak through university debating, he hadn’t always appreciated good beer. “My beer drinking career got off to a rough start with a slightly warm six-pack of Rheineck – an unpleasant experience put my beer appreciation back several years,” he says. Suffice to say, he recovered. “My first allegiance was to Lion Brown then Tui. For me at that time, Tui suited every social occasion and matched every type of food. The Tui team were probably using me as a case study of the perfect consumer.” Then things changed. For years, a very good friend had been trying to tempt Neil away from his favoured “East India Pale Ale (yeah right) with a range of fine local and international beers. “While everyone around him sported the generic lager de jour, he would have a veritable cornucopia of pilsners, extra special bitters and barley wine. He always tempted me to “try a bit of this, sir, instead of your bog standard New Zealand lager. Thanks to his efforts, whole new vistas of beer opened up and I’ve been frolicking happily in them ever since.” Neil says the development of his beer taste has paralleled the welcome development of a real beer culture in New Zealand. He’s gone from a single-brand mainstream drinker to one who appreciates a wide variety of beers. “The craft beer scene in New Zealand is going from strength to strength and exciting new imports seem to be arriving daily. And with an Epic Pale Ale in my hand, I know which lifestyle I prefer."http://realbeer.co.nz/alefiles/beer_writers/neil_miller/ and http://www.beerandbrewer.com
Posted by Adrienne Rewi at 7:01 AM