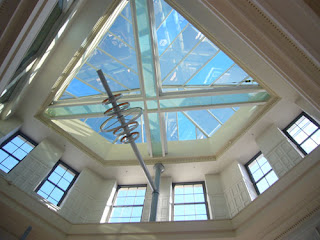 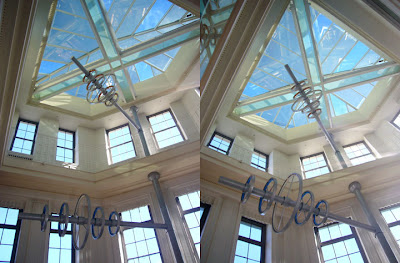 "Radii" Marcus Moore, The Crossing, Christchurch. August 2008. Ajr
It seems more than fitting that I should photograph this kinetic sculpture on the move…..on a moving escalator actually… up and down, up and down until I had some satisfactory shots. “The Radii, 2000” is a programmed kinetic sculpture by Marcus Moore and it’s located above the escalators in The Crossing, a Christchurch retail complex on the corner of Colombo Street and Cashel Mall. It was commissioned by The Carter Group in 2000 as part of Art & Industry 2000 and it acts as an arbitrary timepiece - its two wheel-tipped shafts projecting from the wall ‘cross over’ on the hour. The Crossing I should add, is also home to the Bus Interchange, so there are less obvious references in the work to the meeting of two points and intersection of two opposing directions. I didn’t have time to ponder the intellectual complexities…. I was so busy gazing up with my camera that I failed to notice the end of the escalator and I was tipped out into the street on my nose!
Posted by Adrienne Rewi at 7:01 AM