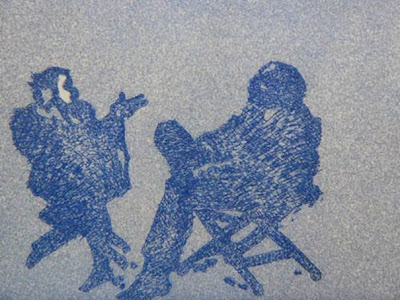 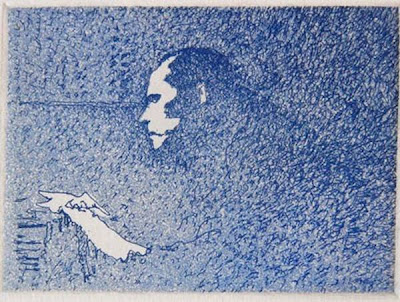 TOP: "The Interview" Etching/Aquatint Barry Cleavin 2008.
BOTTOM: "Invention 2" Etching/Aquatint Barry Cleavin 2008.
I was going to wax lyrical about Christchurch printmaker, Barry Cleavin’s latest exhibition, due to open at Papergraphica in Christchurch on November 17th. It’s a collection of 42 new etchings/aquatints – all but one in colour – entitled CHROMATIC VARIATIONS ON A THEME OF GLENN GOULD.’ Half of the works in the exhibition are ‘unique impressions’ – that is ‘one offs’. The editioned works (limited to 12 impressions from a plate) are printed in Ultramarine Blue – “as befits the mostly Baroque aspect of things,” says Barry. And now, instead of rabbiting on, I’m going to let Barry speak for himself about the show: “Over years of ‘listening,’ as different from ‘looking,’ I have been accompanied by music as I work. Glenn Gould explored one theme in a multitude of ways using the most fundamental techniques in musical composition – variation. He worked as a pianist, writer, critic, media artist, and conductor. He died aged fifty. He was very differently-abled. I accumulated an archive of visual information to work from that was relevant to my needs and parallel to the sounds that I had been listening to for so many years. I visually sought to align the images with the music – interpreting the interpretations if you like. Visual Variations on Aural Variations. So. Gould interpreted Bach and I interpreted Bach and Gould in my idiom. Thus, Bach’s Chromatic Fantasy in D Minor ( which incidentally Gould considered to be imperfect, as he did Beethoven’s ‘Appassionata’) is reinterpreted by me in October 2008 using Gould himself as a visual point around which to impose colour overlays ( chromatic variations), as had been suggested to me via the recording made on October 11, 1979. There is implicit in this event homage to Glenn Gould.” The Papergraphica show runs from November 17 to December 6.
Posted by Adrienne Rewi at 7:01 AM